Discovering US relatives I never knew I had by using the Ancestry.com DNA kit. 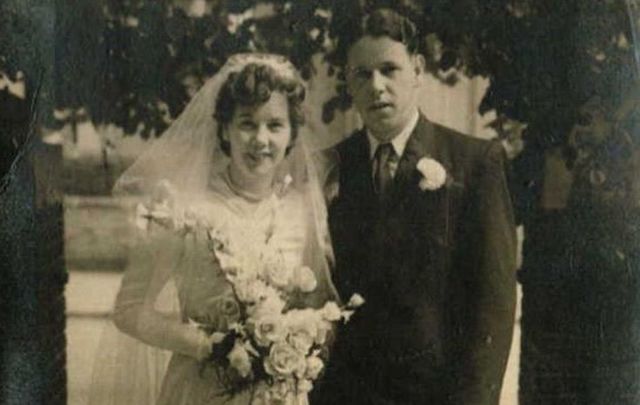 A wedding photo of my grandmother I discovered via Ancestry.com. Frances Mulraney

Ancestry DNA confirmed my true home is in Co. Galway.

Ed Sheeran’s “Galway Girl” may make me cringe, while the original song of the same name from Mundy and Sharon Shannon has me ducking for cover, but I was more than delighted to discover recently that I can officially brand myself as a Galway Girl thanks to an Ancestry.com DNA test (found out more about the process here).

It should have come as no surprise, what with both my maternal grandparents coming from small townlands surrounding Dunmore, Co. Galway (before their move to England). But I have lived in Co. Kildare for the majority of my life, and I’d always considered myself as more of Lilywhite than one of the Tribesmen.

Seeing pictures of my grandmother on her wedding day in a family tree charting the generations going back before her –all of whom lived in Galway – has, however, made me reassess that loyalty to the Lilywhites. It appears that the province of Connacht is where my DNA ultimately comes from.

A picture of my grandmother and her family discovered via Ancestry.com. Image: Frances Mulraney.

It seems that many Irish people suffer an identity crisis when they spend some time living abroad, questioning what it is that makes you Irish, why it is that you feel such a strong affinity to a particular section of the world, and why is it that we consider some people to be more Irish than others.

Unlock your own ancestry with a DNA test, now $20 off!

I can’t say that taking an Ancestry DNA test answered all those mind-boggling questions for me, but what it did do was to make me all but certain that being Irish is as much to do with how Irish you feel as anything else, and that this can really be true at a county level as well.

Discovering the results of my test has also instilled in me an even greater respect for the generations of Irish emigrants who traveled before me, some of whom were members of my own family that I had never even heard tell of before taking this DNA test.

Read more: Watch as the IrishCentral staff find out how Irish we are with DNA test results!

Information found from Ancestry after a link via my DNA test.

Overall my percentage of Irish ethnicity came up as 71%, according to Ancestry DNA, which is quite below the average for a native of 95%. It just goes to show, however, that ethnicity is not equal to nationality and my experience growing up in Ireland has certainly awarded me with more Irish traits and characteristics than a person living elsewhere who technically has a larger percentage of Irish DNA than I.

Of that Irish ethnicity, it showed that Connacht, and especially Co. Galway, are where my tribe could be found as far back as the 1800s. Having visited my Mom’s cousins in Galway, spent summers there in Gaeltacht summer camps, and enjoyed much time in Galway City, a proven added connection to the county is all I need to ensure it remains as one of my favorite places.

For me, however, the most special aspect of the DNA test has not just been proving for once and for all that I am a very small percentage of British (just a minimal 4%) but in discovering parts of the family that I never knew about before, in particular the parts of my grandmother’s family who had moved to the US centuries before me.

Additions to my family tree found after my Ancestry DNA test.

When I was younger my cousin and I would spend hours at the dinner table in our grandparents' house in England sketching out our family tree to find out exactly how many hundreds of cousins we truly had. While I learned so much about my family from that rainy summer’s day exercise, nothing really sank in as to the extent of my roots in County Kildare, or in Galway especially, until the DNA test helped me to connect with more distant strands of the family tree I had not yet ventured up.

With help from the family trees of the people I was matched with via Ancestry, I managed to locate a person living in Philadelphia with whom I shared a relation and who had stocked out our family tree to an extent I’d never seen before. (Their remarkable tree has over 2,000 entries in total!)

From here I learned of earlier offshoots of the family who had made their way to Pennsylvania and settled there, showing how wrong I was in thinking I was one of only a few members of the family to have lived in America.

Finding my maternal grandfather’s side of the family has shown itself to be more difficult because of the multitude of Smiths and Burkes in the area, but my father’s side has led to information on the family going back to famine times thanks to my DNA matches.

My paternals grandparent's wedding cert found after my DNA test.

While I thought that the Great Hunger had truly registered with me as one of the greatest tragedies in Irish history, it was only when I discovered that my great-great-grandfather William Tyrrell was born in 1847, known as Black ‘47, the worst year of the famine, that I thought about the impact it may have had on my own ancestors.

While this side of the family may not have been as hard hit in Kildare as my mother’s side in Galway, they all nonetheless lived through it, or lived through the hard years afterward when the Irish population tried to recover. It does place a different kind of emphasis on my family’s history and on the fact that my family is still living in those exact areas of the country and managed to survive, no doubt working hard as the domestic servants and laborers the Ancestry records show them to have been.

Unfortunately, I never had the opportunity to meet my Dad’s parents and my Mom’s parents died while I was still in my teens. For this reason, having grown up with my maternal grandparents, seeing their names sit at the bottom of our family’s own special arc in history was more exciting and meaningful than I really thought it would be.

I’ve always been interested in taking a DNA test but now, as an emigrant, it is of even greater importance to me to flesh out my ancestors' stories learn how we've traveled from there to here.

As for my Dad’s side, my immediate family all still currently live alongside an old cottage where the Mulraney family has lived since the start of the 20th century. (Our last name is said to come from Mhaoil Bhreandáin, followers of St. Brendan, however, that would suggest we would originally have come from stock based further to the west of the country too.)

Here’s hoping with the help of Ancestry.com and my DNA test results, I can link up with further extended members of the family and  I can continue to learn more about the generations that brought me to this point and, in particular, to learn more about the 23% of my DNA that has its base in other parts of the West of Europe including France and Belgium. Sacré bleu!

Have you ever had a DNA profile done? Tell us what you learned in the comment section!

Unlock your own ancestry with a DNA test, now $20 off!