Amazing drone footage by Polish filmmaker captures the magic of a summer in the City of Tribes. 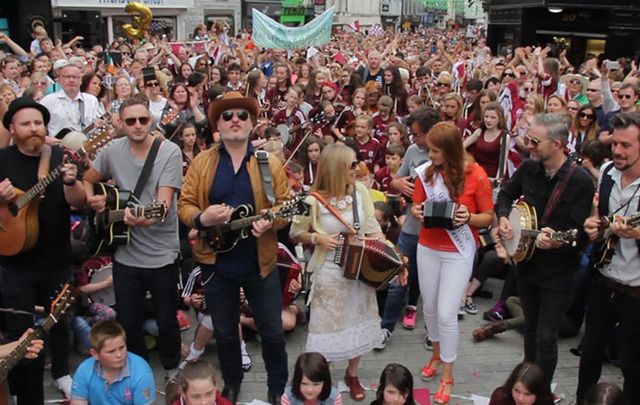 Amazing drone footage by Polish filmmaker captures the magic of a summer in the City of Tribes. YouTube

A crowd of 15,000 broke the record last summer for the most people performing the song “Galway Girl,” as part of the City of Tribe’s bid to become one of the European City of Culture for 2020. It's little wonder they won considering this mammoth display of enthusiasm.

Led by Mundy, Sharon Shannon and others, and recorded by Kamil Films the crowd belted out the iconic Steve Earle tune in early July. The people of Galway did their city proud and their campaign Galway2020 was successful. The aim of the video was to promote Galway as a lively summer destination and the wonderful footage was captured using 10 drone cameras.

Speaking to the Galway Advertiser in advance of the shoot filmmaker Kamil Krolak said “Sharon Shannon has been strongly supporting the project. She is a very generous person and lots of fun to be around. She is exactly what we were looking for, and full of positive energy,” said filmmaker Kamil Krolak.

Krolak, originally from Poland, is the man behind Galway’s homage to Pharrell Williams’ “Happy” (see below). He said “Galway is a unique city, I have travelled a good bit, and I don’t think these videos would be as popular if it was somewhere else.”

“The city is vibrant, has a great culture, and everyone loves to get involved.”

The Polish filmmaker is also the talent behind the video “Fifty People One Answer,” which was filmed on Shop Street, in Galway in 2011. The charming video has so far racked up close to 1.5 million views on YouTube. He certainly captures something special about Ireland in his videos.

Of the “Fifty People One Answer” video Krolak said “That was amazing, and very unexpected. The video reached so many people all over the world, and people still get in touch to say a few kind words about it.

“It gave me more motivation. It was a real life changer, and I probably wouldn’t be doing what I am now if it wasn’t for that video.”

When ask about filmmaking and how he arrived to Ireland he explained “I always had a passion for filmmaking, but I couldn’t afford film school in Poland so I came to Ireland and fell in love with the country.”

And who could blame him!