Famous astronauts with links to Ireland, from Neil Armstrong and Michael Collins to Chris Hadfield. 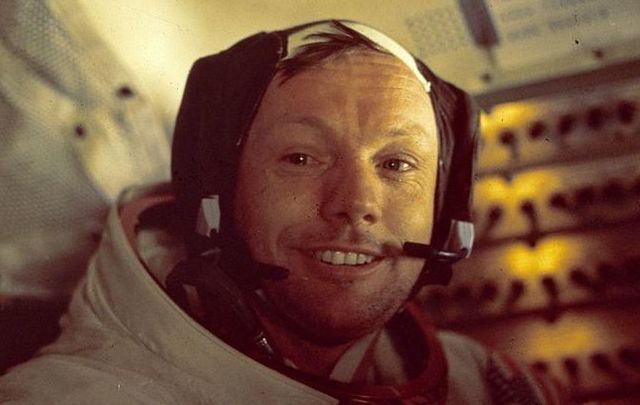 Astronauts of Irish descent have taken some giant leaps for mankind.

With the 50th anniversary of the Apollo 11 moon landing on July 20, we're recognizing some amazing astronauts with Irish roots - from Neil Armstrong, the first man to walk on the moon, to astronauts still working today.

Ireland, part of the European Space Agency, might not have its own space program. But it sure can lay claim to some of the most famous and accomplished astronauts, of history and today.

The first man to walk on the moon was proud of his Ulster heritage. Armstrong, who was Mission Commander of the Apollo 11 moon landing in 1969 and spent two-and-a-half hours exploring the surface of the moon with fellow astronaut Buzz Aldrin, had roots in Co. Fermanagh.

He first visited Ireland in 1997 to open an exhibition about space exploration in the Kerry County Museum and returned in 2003 to be interviewed by Gay Byrne at the National Concert Hall, and again in 2006. He once told David Moore, the head of Astronomy Ireland, that he was descended from a family of cattle rustlers in Fermanagh.

Born and raised in Ohio, Armstrong was also of Scottish and German descent. Prior to joining NASA, he served in the U.S. Navy and Air Force. Armstrong died in 2012; there were widespread tributes throughout Ireland and Northern Ireland.

With the same name as one of Ireland’s most beloved heroes, Michael Collins the astronaut is another highly admired figure. Collins was born in Rome in 1931, the son of a US Army Major General stationed there. Collins, an Air Force pilot, was admitted to NASA in 1963 – his second time applying to become an astronaut.

Collins flew two space missions: Gemini 10 in 1966, during which he performed a spacewalk, and the famous Apollo 11, during which he kept the Command Module in orbit while Neil Armstrong and Buzz Aldrin walked on the moon.

His Irish roots can be traced to the town of Dunmanway in Co. Cork, from which his grandfather, Jeremiah Collins, emigrated in the 1860s. Collins appeared multiple times in our sister publication Irish America magazine’s Top 100, with him and his wife, Patricia Finnegan, attending the awards ceremony.

While the first American to orbit the Earth was primarily of Scottish heritage, he also had an ancestor who emigrated from Ireland to Pennsylvania in 1768. John Glenn was born in Ohio in 1921. He was a pilot in WWII and the Korean War and then worked as a test pilot. In 1958 he became one of (then newly-formed) NASA’s first recruits. In 1962 he flew the Friendship 7 mission and became the first American to orbit the Earth, which brought him fame and acclaim. Today he is the last surviving member of the crew.

A close friend of the Kennedys, Glenn was deeply affected by JFK’s assassination and began to consider a career in politics. He retired from NASA a few weeks after Kennedy’s assassination, and in 1965 retired from the military to run for office in his home state of Ohio. He served as senator from 1974 – 1999.

RTE has footage of Glenn’s visit to Limerick in 1968.

The daughter of two Irish immigrants from County Cork, Collins made history in 1995 as the first female NASA pilot and commander of a space shuttle. Collins was born in Elmira, NY in 1956, to James and Rose Marie Collins.

After graduating from Syracuse University in 1978, she trained as a pilot at Vance Air Force Base in Oklahoma. In 1989, she became the second woman ever to attend the US Air Force Test Pilot School and was then selected for the astronaut program in 1990.

Collins was confirmed as a pilot in 1992, and in 1995 flew the STS-63, which helped coordinate a transfer between the space shuttle Discovery and the Mir space station. She was the pilot for STS-84, in 1997, and in July 1999 made history as the commander of STS-93. In 2005 she commanded NASA’s STS-114, which brought supplies to the International Space Station. During this mission, Collins became the first person ever to guide a space shuttle through a 360-degree pitch maneuver in space. Collins retired from NASA in 2006.

She married a fellow pilot, Pat Youngs, with whom she has two children. Collins has appeared many times in our sister publication Irish America magazine’s Top 100 and even graced the cover.

Kathryn Dwyer Sullivan was the first American woman to walk in space. Born in 1951 in Patterson, New Jersey, Sullivan was raised in Woodland Hills, California. A geologist and Earth scientist, Sullivan also trained as a pilot and was selected by NASA in 1978, becoming an astronaut in 1979.

Sullivan flew three shuttle missions, logging 532 hours in space. Between shuttle flights, she also joined the US Naval Reserve in 1988, eventually retiring with the rank of captain. She has had a very accomplished career since retiring from NASA in 1993, serving as chief scientist for the National Oceanic and Atmospheric Administration, among other pursuits. In 2004 she was inducted into the Astronaut Hall of Fame, and in 2011 she was confirmed by the US Senate as assistant secretary of commerce for environmental observation and prediction and deputy administrator for the National Oceanic and Atmospheric Administration. On March 6, 2014, she was confirmed by the Senate as undersecretary of commerce for oceans and atmosphere, having served as the acting NOAA administrator since February 28, 2013. Her tenure ended when President Trump took office.

Bryan Daniel O’Connor, 72, is a retired NASA astronaut with 15 days, 23 hours, and 18 minutes in space, and is also a former US Marine Corps Colonel. Born September 6, 1946, and raised in Twentynine Palms, California, O’Connor graduated from the US Naval Academy in Annapolis in 1968 and began active duty with the Marines. He earned his pilot’s wings in 1970 and flew many land and sea assignments as an attack pilot, before becoming a test pilot in 1975.

O’Connor was selected to become an astronaut in 1980, specializing in support and safety. In addition to flying three missions, O’Connor was huge behind-the-scenes force at NASA. After the Challenger shuttle disaster of 1986, he headed a number of key safety initiatives and became the first chairman of NASA’s Space Flight Safety Panel. O’Connor briefly retired from NASA in 1991 before returning to lead a safety upgrade to the shuttle program. The following year he traveled to Moscow to head negotiations for the MIR shuttle program.

As director of the Space Shuttle Program from 1994 until his retirement in 1996, he restructured all aspects of the $3.5 billion per year program, ultimately saving 1 billion in taxpayer dollars. He is now an aerospace consultant. He and his wife, Susie, have two sons, Thomas and Kevin. Kevin is a veteran of Operation Iraqi Freedom.

Catherine Grace Coleman, who goes by Cady, took being Irish in outer space to a whole new level on St. Patrick’s Day 2011 when she called in a special message from the International Space Station.

Coleman, who in addition to being an astronaut is also an accomplished flutist, explained “In my family, we are a quarter Irish on each side, and somehow that adds up to much more than a half.” For her six-month-long expedition, she wanted to bring something up to space with her in recognition of her Irish heritage, so she asked her friends the Chieftains if they wouldn’t mind her borrowing some of their instruments. Matt Molloy lent her his old Irish e-flat flute, and frontman Paddy Moloney volunteered his penny whistle. Watch the video above to hear Coleman play some tunes and talk about the instruments as they float next to her in zero gravity.

Coleman, who was born in South Carolina in 1960, is a graduate of MIT with a doctorate in polymer science and engineering from the University of Massachusetts. She was commissioned as 2nd lieutenant in the Air Force in 1983 and selected by NASA to join its Astronaut Corps in 1992. She is married to glass artist Josh Simpson.

When they were eight, three years after man landed on the moon, identical twins Scott and Mark Kelly told their grandmother, “Grandma, we’re going up in space someday,” their father Richard Kelly, a retired police captain who lives in Flagler Beach, Florida, recalled in a 2006 interview with sister publication Irish America. Their mother, Patricia, a retired police officer like her husband, said that she wasn’t surprised her sons chose similar career paths. “I really do believe there is a genetic disposition for certain things,” she said. To keep the twins on equal footing, their parents refused to tell them which one was older until they were 16. Mark is older by six minutes. Both hold the rank of Captain in the U.S. Navy and both are space commanders. They are the only siblings in history to both travel to space.

Since retiring after his last NASA mission in 2011, Mark, along with his wife, former Arizona congresswoman Gabby Giffords, has become a powerful advocate for gun control. Scott returned to the ISS in 2015 for a year-long mission, and the two Kelly twins took part in a groundbreaking ongoing study of the effects of outer space on genetics. He then retired in 2016.

If Ireland had to choose a favorite astronaut, however, it might just be the retired Commander Chris Hadfield of Canada. The former International Space Station commander gave Ireland quite the intra-galactic shout-out in 2013, tweeting photos of the Emerald Isle from space and recording a zero-gravity rendition of Danny Boy on St. Patrick’s Day.

Hadfield’s native Canada is also exceptionally proud of their first-ever citizen to walk in space. Hadfield, 54, was raised on a farm in Ontario and grew up to become an engineer and a Royal Canadian Air Force fighter pilot. He was accepted to the Canadian Space Agency in 1992 and had a 35-year career as an astronaut, flying two shuttle missions and serving as ISS commander.

In January 2014, it was announced that he would become a Tourism Ambassador for Ireland, a service he gave free of charge. With his wife, Helene, and a camera crew, he traveled throughout the island for five days, visiting key attractions

“I don‘t think you have to be from somewhere to appreciate it and maybe a stranger’s set of eyes will help other people see it even better. I’m just delighted, I don’t exaggerate my role at all. I’m happy to meet as many people as possible over the next few days,” he said when his role was announced. It was not Hadfield’s first time visiting Ireland – his daughter, Kristin, completed the Psychology Ph.D. program at Trinity College, Dublin.