These Irish staple dish dates all the way back to the 1700s. 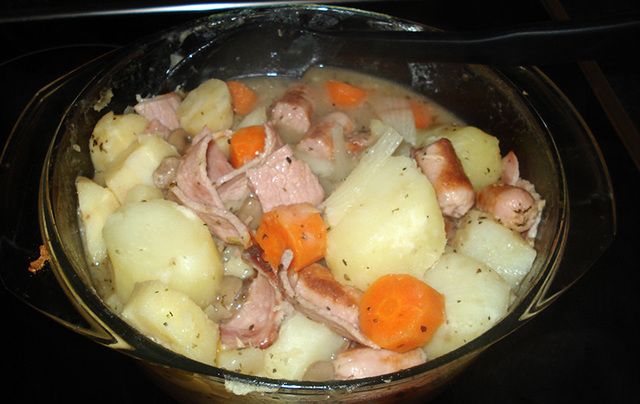 Comfort in a bowl! A delicious Dublin coddle recipe.

Dublin coddle, a warming meal of sausages and potatoes, dates back to the 1700s and is traditionally thought of as a city dish eaten in the winter months. Its popularity has been attributed to the fact that an Irish wife could go to bed and leave it simmering on the stove for hours so that it might be ready for when her husband arrived home from the pub.

Coddles were a useful way of using up any stray rashers of bacon or sausages on a Thursday, in times when Catholics were not supposed to eat meat on a Friday. The meal remains a popular choice for busy people who prefer to prepare food in advance, then head out and let the oven do the work.

A favorite of Jonathan Swift - the author of Gulliver’s Travels - and the dean of Christ Church in Dublin, coddle has many references in Irish literature, including the works of James Joyce. The name ‘Coddle’ is most likely descended from caudle, which comes from the French term meaning ‘to boil gently, parboil or stew’. Today, the word is associated with gently cooked eggs…

Dublin coddle is best served with a pint of Guinness on the side, and lots of Irish soda bread to mop up the gravy. As with so many recipes, a dash of Guinness added towards the end of the cooking process won’t do the dish any harm either!

Peel your potatoes, quartering the big ones (small can be left whole).

Bring your stock to a simmer.

Grill the sausages and bacon until colored.

Take a heavy pot, and layer your ingredients in the following order (starting at the bottom): onions, bacon, sausages, potatoes. Season and add parsley to each layer.

Pour your stock over the top.

Place your pot on a lit stove until the liquid comes to a boil, then once it has, turn the heat down and cover the pot. Put in the oven for 3-5 hours, but remember to check after 2 hours, adding more stock if necessary.