On this day, April 28, 1992, Irish-born artist Francis Bacon died. We look back on the facts of his life and why his biography includes some harsh words from Margaret Thatcher. 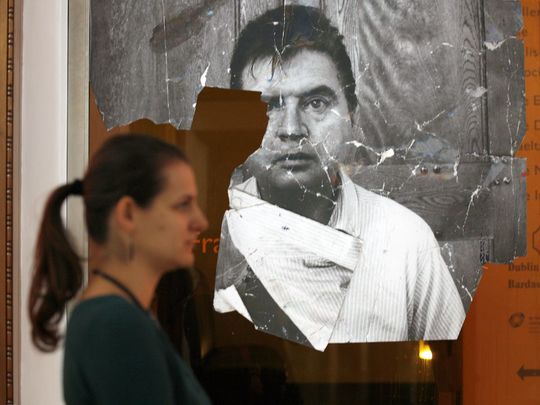 A photo taken of a portrait of Francis Bacon at the "Francis Bacon A Terrible Beauty" exhibition at Hugh Lane Gallery in 2009. Ray Roberts/Rex Features

Sadly on this day, in 1992, the world-famous raw Irish artist  Francis Bacon passed away. Here we look back on his life and what a controversial British Prime Minister had to say about his beloved works.

Once described by Margaret Thatcher as “the man who paints those dreadful pictures,” the artist Francis Bacon’s bleak view on life was often ascribed to his hard upbringing in Ireland, where his father once had him allegedly horsewhipped because he suspected he was gay.

He was born at 63 Lower Baggot Street, Dublin, the son of an Australian-born Boer War veteran and a Sheffield steel heiress.

Raised by a child nanny, Jessica Lightfoot, who became a major figure in his life, Bacon was sent to live with his grandparents in Abbeyleix, County Laois, after World  War I though the family soon moved to Straffan, in County Kildare.

His love of dressing up and effeminate demeanor intensely irritated his father who had Francis horsewhipped by his groom.

In 1924, at age 15, Bacon moved to Britain after his father threw him out of his house after finding him posed before a mirror in his mother’s underwear.

In Britain, he advertised himself as a “gentleman’s companion” and had a series of relationships with older men.

In 1933 he painted his first masterpiece “The Crucifixion.” He was unapologetically gay at a time when such behavior was usually closeted. He also loved to gamble, running several London gambling houses at one point.

Following his death in 1992 his paintings began to soar dramatically in price.

Back in 2013, a triptych painting by the Irish emigrant artist fetched a world record price of $142.4 million at an auction in New York.

The triptych (three images painting), from 1969, is of his friend and sometime rival Lucian Freud sitting on a wooden chair.

It was sold at Christie’s auction house after a frenzied bidding process between seven super-rich bidders.

Christie’s had originally valued the painting at $87 million. It surpasses the recent sale of Edward Munch’s “The Scream,” which sold for $112 million in 2012.

The buyer was not identified but the painting was purchased by New York agent William Acquavella.

“I went to $101 million but it hardly mattered,”  Larry Gagosian, the super-dealer told The New York Times.

Gyu Shin, the director of the Shin Gallery, on Grand Street in Manhattan, told the Times he had bid for himself.

“I was expecting it to go for around $87 million ... I loved that painting and I couldn’t control myself,” he said.

“Maybe someday I’ll have another chance.”

Super agent Michael Ovitz was said to be among those who were bidding for the painting. He was present during at the auction at Christie's midtown salesroom.