On This Day: Irish physicist Ernest Walton, the first 'atom smasher,' is born

Irish physicist Ernest Walton was born in Co Waterford on October 6, 1903. He went on to become the first "atom smasher," 20 years before the Manhattan Project

When people think of splitting the atom, most people think of the Manhattan Project undertaken during WW2, the atomic program headed by Robert Oppenheimer that spawned nuclear weapons and the Cold War.

However, atom-splitting was going a full 20 years before the breakthrough at Los Alamos Laboratory at Cambridge University, where a young Irishman was busy ‘atom-smashing’ training.

Born October 6, 1903, Ernest Thomas Sinton Walton was born in County Waterford and can be found in the 1911 Census.

Son of a Methodist clergyman, Walton spent much of his early life moving from school to school as his father’s parish changed. However, despite this, Walton excelled in Mathematics and Sciences, winning a scholarship to college in 1922.

Having been interested in Physics from an early age, he earned first an Undergraduate and then a Master’s degree in the subject.

After obtaining his degree from Cambridge in 1931, Walton started further research into nuclear theory, particularly atomic chemistry. He collaborated extensively with John Cockcroft, a man who would eventually become head of the Atomic Weapons Establishment at Aldermaston, and the two set about designing one of the first ‘atom-smashers’, or particle accelerators. 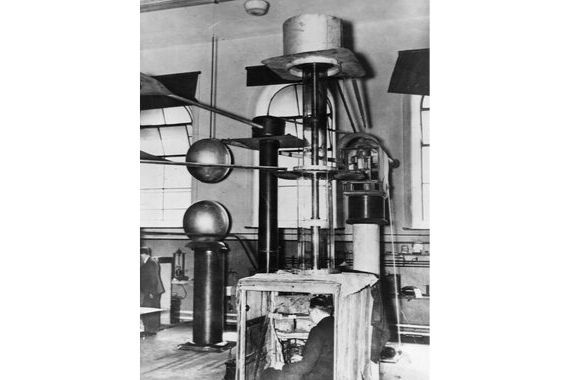 The 150,000 volt proton accelerator used by Doctors John Cockcroft (1897 - 1967) and Ernest Walton in the Cavendish Laboratory at Cambridge. (Getty Images)

After much frustration and perseverance over a number of years, Walton and Cockcroft finally succeeded in ‘smashing the atom’ in 1932.

With this, they successfully proved a number of atomic theories and kick-started the development of more particle accelerators to continue exploring the nature of atomic structures. Particle accelerators are still essential for the study of modern Physics: the Large Hadron Collider, operated by CERN today, works on the same principles, albeit on a bigger scale.

The press reaction to this news was one of celebration, with the Western Morning News recognizing the success of the experiment as ground-breaking in its field, firstly because many scientists had been trying to achieve a split of the atom, and secondly, as it opened the door to more atomic research.

The Portsmouth Evening News took a different line: they remarked they were happy the universe was not destroyed by the experiment!

Walton and Cockcroft hold the joint-honor of being the first to artificially split the atom, as this experience was recognized as the first of its kind. They would eventually win the 1951 joint Nobel Prize for Physics "for their pioneer work on the transmutation of atomic nuclei by artificially accelerated atomic particles."

* This article was originally published in September 2015 as part of a partnership between Findmypast and IrishCentral.