When Elizabeth Taylor brought a pet monkey to her Dublin hotel

Elizabeth Taylor and Richard Burton once brought a pet monkey to The Gresham Hotel, Dublin in 1965 and caused quite the stir. 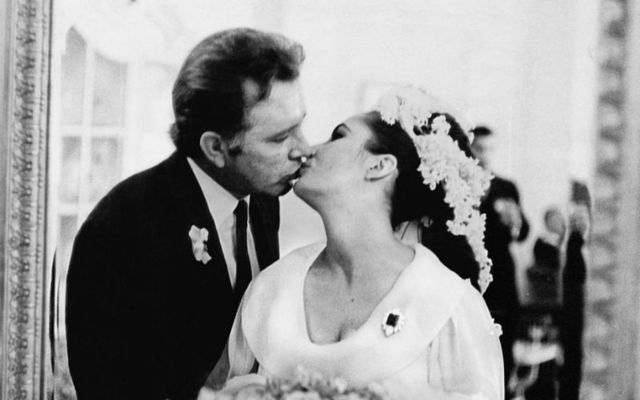 Elizabeth Taylor and Richard Burton at their first wedding in Montreal, Canada Getty

Elizabeth Taylor and Richard Burton once brought a pet monkey to a hotel in Dublin and created a massive scene when the monkey misbehaved.

The Gresham, a landmark Dublin hotel on O’Connell Street, has a luxurious two-bedroom suite named after Elizabeth Taylor in honor of the two visits she and Richard Burton spent there.

The hotel was the home of the couple for 10 weeks in 1965, while Burton filmed scenes for ‘The Spy Who Came in From the Cold,' recalls a story in the Irish Independent.

Taylor and Burton took over a whole floor of the hotel to accommodate their entourage of four children, a children's nurse, a maid, and Elizabeth’s pet monkey.

Italian film director Franco Zefferelli flew to Dublin to talk to the couple about filming 'The Taming of the Shrew.'

"Liz had somehow acquired a Bush Baby (a small African primate), which had not taken to its luxurious imprisonment and had set about rearranging the decor. It had knocked over vases and lights, ripped the curtains and had, by the time I arrived, taken refuge near the ceiling of the bathroom, where it was clinging, wide-eyed with fear, to one of the water pipes,” Zefferelli said.

"Liz's maid had withdrawn with a scratched face, Richard was angrily trying to get everybody to shut up, and Liz could clearly think of nothing but the rescue of the poor little animal.

"As I entered, the two great stars proceeded to have one of those magnificent rows that made them so alarmingly electric. I was nervous but utterly spellbound. Seeing me there, Liz broke off. 'Forget about this fricking Shakespeare,' she commanded, 'and come and help'."

Elizabeth Taylor and Richard Burton first met in 1963 on the set of Cleopatra. They were both married at the time. Two divorces and a year later, the pair married in Montreal at the Ritz Carlton Hotel in March 1964.

At first, the two Hollywood stars weren’t too happy with their room at the Gresham, for within minutes of arriving at the hotel, the first thing the newly-married couple complained about was the small bed in their luxury suite. A new bed was ordered immediately.

On St Patrick's Day, Taylor gave all the staff in the Gresham a baby bottle of Power's whiskey and a green carnation, while others recall that she also gave gifts of bouquets for sick children.

During their stay, on March 3, Taylor’s chauffeur-driven Rolls Royce struck and killed an elderly pedestrian, Alice Brian, on the Stillorgan Road.

A report at the time said: "Elizabeth Taylor, her husband Richard Burton and the French chauffeur Gaston Sanz, expressed their 'sincere and profound sympathy' to the family of (the deceased)."

Two years later the couple stayed at the Gresham again when Taylor gave evidence in the case concerning the death of Mrs. Brian.  Taylor never again returned to the city.