The Irish duo who murdered 16 people and sold the cadavers

The gruesome tale of Irish men William Burke and William Hare, who killed and sold bodies to medical students, prompting a major change in medical law. 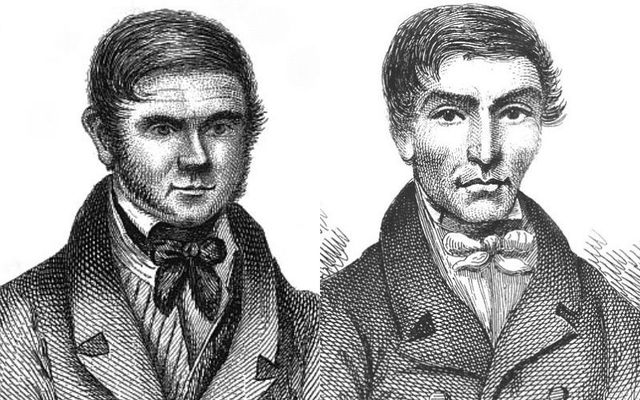 William Burke, of Co Tyrone, and William Hare, of Co Armagh or Co Derry, were debased Irishmen living in Edinburgh, Scotland in the first half of the 19th century.

Businessmen at heart, the pair were willing to exploit any opportunity to earn some cash. Unfortunately, a key gap in the market in 1820s Edinburgh was a lack of bodies for the surgeons’ colleges. The ruthless actions of these two Irishmen cut a bloody swathe that ultimately changed medical law.

The two men met when Burke moved into a boarding house run by Hare’s wife. They were both manual laborers (navvies) working on the extension of the Union Canal. The pair quickly struck up a close friendship and went to Edinburgh in search of work.

At around the same time, the surgeon's colleges in Edinburgh began to run out of fresh cadavers for dissection. Executed criminals were at a premium, and their bodies were swiftly claimed by competing schools. Struggling for subjects, surgeons and their assistants looked for ways to remedy the shortage, no questions asked.

As luck would have it, Burke and Hare could supply a freshly deceased cadaver. When one of Hare’s wife’s tenants died owing them rent, Hare decided to make good the shortfall by using the only property his tenant had as security. He promptly sold the deceased man’s body to an assistant of Dr. Knox, a well-renowned surgeon at one of the schools. Hare made £7 10s, the equivalent of £800 (approx $1,000) in today’s money!

This success set Burke and Hare thinking. If one body was worth £800, and there was a shortage of them, why not supply more bodies to the surgeons colleges? It seemed to be easy money. Unfortunately, Burke and Hare could not just wait for their ‘merchandise,’ as they called their victims, to die. They began to plot murder and committed their first in early 1828.

Over the course of the year, Burke and Hare provided Dr Knox of the Royal College of Surgeons with at least 16 other cadavers, including a mother and daughter, and an 18 year old boy. They were in the process of moving yet another body when their activities were discovered and the police were alerted. The tow men were arrested, and news of their activities caused a furore in the press.

In order to secure a conviction, as it was likely they would blame each other for the instigation of the crime, Hare was offered the chance to turn on Burke. He did so and escaped prosecution for his part in the murders by testifying against Burke. Hare was released shortly thereafter, but he spent the rest of his time in Scotland being recognized and chased from various towns.

Burke was executed for his part in the crimes and, in an ironic quirk of fate, found himself on the very anatomy table of Dr Knox he had been killing people to supply.

His skeleton is preserved to this day in the Royal College of Surgeons as a reminder of the crimes he committed. The crimes of these two men led to an easier supply of cadavers for medical establishments, and effectively stopped ‘anatomy murders.’

Burke and Hare were two Irishmen who were too ambitious for their own good. Why not explore the Findmypast Crime archives for yourself, and see if you have any criminally enterprising relatives?

*This article was originally published in 2016 as part of a partnership with Findmypast. For more information click here.