A 15th-century Irish vellum manuscript recently discovered in the binding of a book reveals a connection between Gaelic Ireland and the Muslim world. 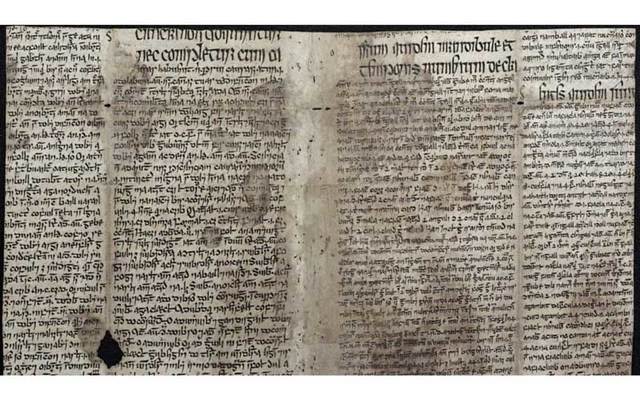 The Avicenna fragment, removed and opened, can be viewed on the ISOS site. ISOS

A 15th-century Irish vellum manuscript recently discovered in the binding of a book reveals a connection between Gaelic Ireland and the Muslim world.

A small Latin manual on administration that had been printed in London in 1534/1536 and passed down through generations to a family in Cornwall was brought to the attention of UCC Professor of Modern Irish, Pádraig Ó Macháin.

It was not the book contents he was interested in, but the binding.

It consisted of a sheet of Irish text cut from a 15th-century Irish vellum manuscript that had been trimmed and folded and stitched to the spine of the printed book to reinforce the spine, the Irish Examiner reports.

"The use of parchment cut from old manuscripts as a binding for later books is not unusual in European tradition, but this is the first time that a case has come to light of such a clear example of the practice in a Gaelic context,"  said Ó Macháin, one of the founders of Irish Scripts On Screen (ISOS), a digital repository of manuscript images.

After examining photographs supplied by the owners, he was able to establish that the Irish text was a medical one.

"A quarter of what survives of late-medieval manuscripts in the Irish language is medical in content," said Ó Macháin, "an indication of the practical purpose of these books in Ireland of the time."

His collaborator, Professor Aoibheann Nic Dhonnchadha of the Dublin Institute for Advanced Studies, a specialist on medieval Irish medical texts, was able to identify the text.

It turned out to be an Irish translation of the ‘Canon of Medicine’ by the Persian physician Ibn Sena (980–1037), better known as Avicenna, considered one of the most significant physicians in the Islamic Golden Age.

The medical encyclopedia was translated into Latin for European audiences during the medieval ages and was a popular text.

“While there are references to Avicenna scattered through other medical texts in Irish, we now know, for the first time, that the Canon was translated into Irish. This fragment must have come from a seriously big manuscript,” said Ó Macháin.

The Irish Examiner reports that the found Irish fragment, which was translated into Irish from the Latin, contains parts of the opening chapter on the physiology of the jaws, the nose and the back.

Recognizing the historical importance of the manuscript fragment, the owners agreed that the binding should be removed from the book. John Gillis of TCD, removed the binding and digitized the contents under the supervision of Professor Ó Macháin.

The images of the fragment can be viewed at the Irish Script on Screen site.