From a holy Joe to a confused alter server, you'll recognize this bunch from your local church 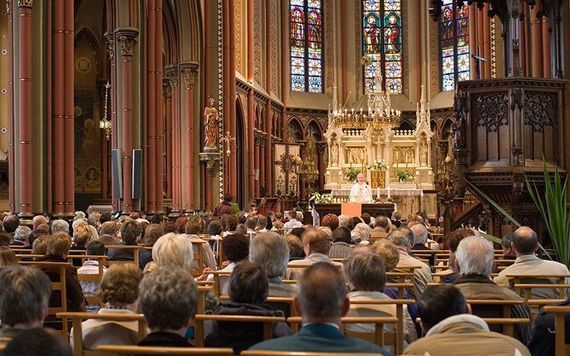 Despite catering to a group of people from religion, Irish masses can be diverse places. Here's a look at the type of people you're likely to come across at your local parish.

You know the guy; the one who opens the chapel, does the collection, reads, serves communion, along with a whole host of other goody-two-shoes mass-related activities.

Runs in from milking, no time to wash the face. Just throw off the wellies and on the boots, and straight out the door!

Then some poor soul has to sit beside him for 40 minutes while he reeks of sweat and souring milk.

3. The grannies who arrived early to light candles

4. The lads down the back

The cool lads down the back not giving a flying freckle what's going on above on the altar. They're there to chat football, the price of cattle and the Late Late Show.

For the love of God would they just shut up!? Inevitably the mother or father has to take them out and then they get a good rollicking when they get home.

It's happened to all of us when we were young, don't deny it.

6. The folks who don't know the new prayers

Peace be with you –

7. The Priest who cuts sermons short if there's a football match

Keep an eye out for the irreplaceable Fr Kevin Fay in the video above. He's the guy running and jumping across the field when Ben Conaty scores a goal for St Pats College, Cavan.

8. The young lad who's left standing at the altar at communion

The poor divil heads up last for communion, walking behind a grown-up and then the priest doesn't see them. Alas, they're left mortified, on their own at the altar, not knowing whether to run out of the chapel or cry.

Being late's always acceptable once it's before the Gospel ... right?

10. The one who thinks she's Celine Dion

The one who's not in the choir but thinks they should be. Sings along with every song but usually sounds like Liam Neeson chasing a load of hens around in a barrel.

11. The slow and boring priest

Speaking of Fr Ted; their boring priest character is one we know too well in real life. He's dull, monotonous and his sermons seem to last a fortnight!

12. The nearly deaf person who shouts

No matter where you are in the chapel you can hear their responses above everyone else.

What's worse now is the fact that they're usually old and set in their ways so haven't adjusted to the new prayers – causing utter havoc amongst the congregation.

Well, I dare say there's no more uncomfortable place for a young teenage lad to see the girl from down the road that he fancies.

For the first ten minutes you give out to yourself for thinking about a girl while in mass but then you give in and stare at her for the rest of the sermon. Then of course there's the terribly awkward moment when you've to walk by her seat on the way to communion!

14. The ones who leave after communion

There's no time! I have to get home in time for Sunday Brunch on Channel 4.

They will not rest until they've shaken hands with everybody in the same seat as them, the seat in front and the seat behind.

Every now and again you'll get a little surprise when a priest from 'somewhere else' arrives out from the vestry to say mass.

He could be from the neighbouring parish or better yet; a local priest who's on a holiday home from the missions. Cue your mother getting over-excited.

17. The person who prays really slowly

The young fella thrown in from the start with no match experience. It's sink or swim and if it all goes wrong he'll have made a fool of himself in front of the whole parish. No pressure!

They're more interested in such a one's daughter from down the road who's apparently pregnant rather than the Immaculate Conception.

No messing about, 25 minutes in and out.

21. The lads who stand outside at funerals

This is what happens when all the lads from the neighbouring parishes who like to sit down the back converge on one chapel for a big funeral.

The back seat's not big enough for all of them so they'd sooner stand outside than sit anywhere else.