My trip to Florida has reinforced my beliefs that it is depressingly pointless to do anything about climate change in Ireland while a place like the US exists in its current state. 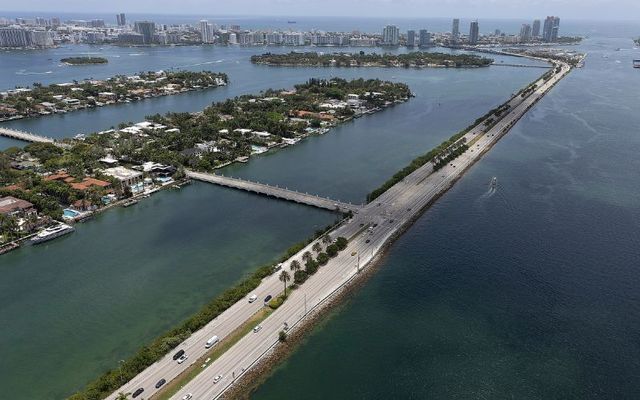 An aerial view of the waters of Biscayne Bay surrounding Palm Islands, which is crowded with residential homes on July 21, 2022, in Miami, Florida. The City of Miami and Miami Beach are expected to be profoundly impacted by rising sea levels due to climate change. Getty

Last year, the Irish Government unveiled an ambitious Climate Action Plan to reduce greenhouse gases by 51% by 2030 and to reach net-zero emissions by 2050.

Though commendable, the plan will mean very little to the general health of the planet if the US, among other large industrial nations, continues to plunder recklessly onward.

I have recently returned home to Ireland from a trip to Florida, which has reinforced my beliefs that it is depressingly pointless to do anything about saving the environment in Ireland while a place like the US exists in its current state.

What good can a small island like Ireland really do when one of the biggest countries in the world in terms of both population and landmass continues to ignore some of the most basic principles of protecting the environment?

What is the point, for example, of using reusable shopping bags in Ireland when most American convenience stores hand them out like they are going out of fashion?

I previously lived in New York for a year and was well used to this practice, but it was only when I returned to Ireland and went back to the States on vacation that I realized just how lazy the US is when it comes to protecting the planet.

I was left staggered after one trip to a CVS to buy a couple of bottles of water and some snacks, a haul that I could have carried in my hands if I needed to.

Instead, the shop assistant dropped my items into not one, but two plastic bags and placed them on the counter before I could even object.

This appears to be common practice in pretty much every convenience store and I was eventually forced to request no plastic bags before a shop assistant had even scanned an item.

Before my recent visit to Florida, I had visited the US on multiple occasions, including spending a year there on a graduate visa, and one thing that has always struck me has been the size of the cars compared to Ireland.

US cars tend to be the size of small tanks and guzzle petrol at a hugely inefficient rate and it is no surprise that transportation emissions are the largest contributor of greenhouse gases in the US.

A 2021 report found that just 2% of all US cars are electric, compared to 75% in Norway, while another report in 2019 found that roughly 75% of Americans drive to work alone.

The continued emphasis on cars - particularly large, petrol-guzzling ones - and the continued neglect of public transport alternatives left me stunned on my recent vacation, even though I had witnessed it all before.

However, the fact the car-centric culture has persisted through the Covid-19 pandemic and the first two years of the Biden presidency left me stunned.

Similarly, I was left staggered by the continued reckless use of plastic straws in the US.

Plastic straws have long been phased out in Ireland, replaced by the more environmentally-friendly - and irksome - paper straws.

During a visit to Chile last year, I discovered that they had done away with straws altogether, with people now drinking directly from disposable drinks cups.

This is not the case in the US, however, where plastic straws continue to be used in almost every restaurant in spite of the evidence suggesting that they are detrimental to the environment.

At one restaurant that offered free refills for soft drinks, wait staff astonishingly presented me with a new straw after every refill. I anecdotally learned that this is commonplace across Florida and across the US.

Once again, it made me feel as though any efforts Ireland - and Chile - had made to remove plastic straws were utterly pointless when the US continues to ignore science and use them at will.

After all, what good can a country of five million people do when a country of more than 330 million inhabitants refuses to fall in line?

This is a relatively small issue in the overall context of the battle against climate change, but it is indicative of a dangerous attitude in the US that persists amongst a sizeable number of its population.

A 2020 study from Yale and Columbia Universities found that the US lags far behind other industrialized nations when it comes to environmental performance, adding that the US is the world's second-biggest contributor to the climate crisis after China. Another report from 2020 found that the US lags far behind Europe in renewable energy, with the US substituting its reliance on coal for a new reliance on natural gas, fumbling an opportunity to move toward a sustainable future.

While the US has undoubtedly made efforts to improve its environmental performance in the two years since Joe Biden defeated Donald Trump in the 2020 presidential election, it still has a long way to go before it becomes the world leader in climate action and environmental protection.

Any attempts Democrats make to fight climate change will be met by fierce resistance at every corner by a party that refuses to accept that there is a problem in the first place.

Biden's recent expansive climate bill - celebrated as a political victory for the under-fire president - still required compromise to keep the Republicans in the House and Senate on board, while any future legislation introduced to fight climate change will require similar compromise.

Politics naturally requires compromise, especially when US politics is divided along such partisan lines, but that rule shouldn't apply to environmental issues, which affect everyone regardless of their political beliefs.

But the US has been fighting climate change misinformation for decades.

In 1997, the Senate unanimously adopted a resolution opposing the first international treaty to cut greenhouse gases, while Donald Trump withdrew the US from the Paris Climate Accords as recently as 2017.

Biden has mercifully led the US back into the Paris Accords, but he is still fighting battles at every turn.

Even the Supreme Court has resisted the fight against climate change, limiting the EPA's ability to curb emissions and justifying it by pointing to a 250-year-old document that was written when cars did not exist.

The US has contributed more heat-trapping pollution to the planet than any other nation in history and, with Republicans in the pocket of oil companies and big business, it will take a long time before the US becomes the global leader in the fight against climate change.

It is difficult to see how anything Ireland does in relation to climate change will make the slightest bit of difference while the US continues to lag behind, thanks, in no small part, to a party that remains steadfast in loyalty to capitalism and neoliberalism.

The US - for so long a world leader in military spending and incarceration rates - needs to take the lead in something worthwhile for once.

Otherwise, the efforts of Ireland and other small countries are hopeless.

A Thousand Welcomes from Mag at Peggy's Cottage