Where the streets have no name: U2 and the best Super Bowl halftime show ever

There simply isn't anything that can top U2's performance at the Super Bowl halftime show in 2002. 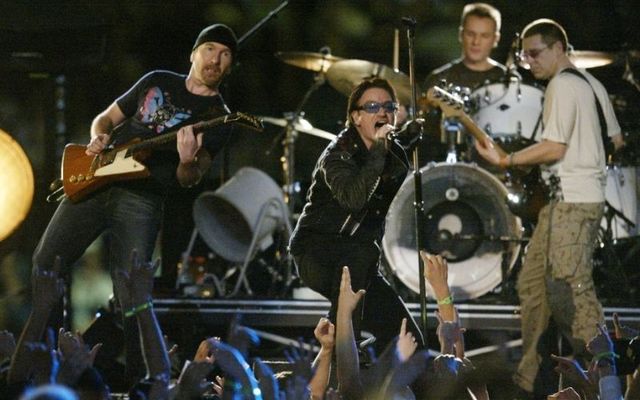 Music group U2 performs during halftime of Super Bowl XXXVI February 3, 2002, at the Superdome in New Orleans. Getty

There simply isn't anything that can top it. From the choice of songs (two absolute classics) to the incredible reaction from the crowd, the classy sans-politicking memorial all the way to Bono's enjoyably over-the-top showmanship. There isn't even any point in holding up other half-time shows as a comparison as it would be like comparing "The Tulsa Dirt Dogs Sunday slow pitch softball team" to "The Boston Red Sox".

U2 managed to do the almost impossible, by being both dignified and entertaining, in an often electric manner. They grabbed the attention of people all around the globe. It was the perfect performance for an imperfect time in our lives.


"U2's two songs -- I wish it had been nine -- were perfect for the occasion. 'Beautiful Day' was more baleful than what I heard on tour, and 'Where the Streets Have No Name' sounded better because it was less noisy than a usual concert, I think because of the backdrop of all the names of the people who died in the Sept. 11 tragedy. I praise you, NFL, selfishly, for giving me 11 terrific minutes at halftime of a great event."

"During last night's halftime show, the mini-concert by U2 managed to strike the right mood of patriotism, pride and solemnity in this first Super Bowl since the Sept. 11 tragedy.

The Boston Globe's Dan Shaughnessy, who had previous to this never written a good word about anything (with apologies, Dan!) said;

"U2's Super Bowl halftime performance -- with names of the deceased from 9/11 scrolling while they played 'Where the Streets Have No Name' -- was the greatest halftime show in the history of sporting events. Hands down."

First up, U2 came on stage to 'Beautiful Day'.

At the time, on a personal level, this was one of those pinnacle life moments for me. The new England Patriots had miraculously made it to the Super Bowl against all the odds and were not only competing but were actually leading as well. The defence was playing out of its skin and Tom Brady looked like a veteran and not the rough-around-the-edges rookie he actually was.

I was home watching with my Dad, my brother and my friend Paul and I didn't even know U2 were going to be the halftime entertainment. When they came on stage I thought to myself "This really can't get any better."

It was indeed a beautiful day Bono, touché.

The opening song was a great way to kick things off but I don't think anyone was prepared for what followed. Bono and the Edge singing softly together as the massive September 11 memorial unveiled behind them was to date the most simple yet moving and caring memorial to that terrible day I have seen.

The mesmeric guitar opening to 'Where the streets..' started up in the background and the Louisiana crowd was ready to explode long before Bono offered 'I want to dance, in the Louisiana rain'

Here is 'Where the Streets Have No Name' in all its glory.

If this doesn't make your heart beat just a little bit stronger, well then, you are already dead inside.