Recent longitudinal studies from the Economic and Social Research Unit (ESRI) showed how challenging society is now for young people in Ireland. 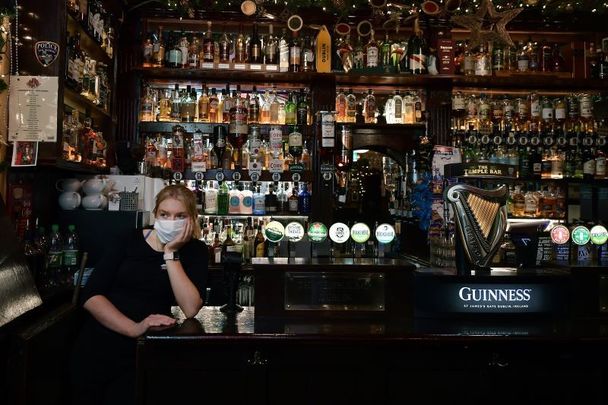 December 20, 2021: Ireland Begins Nightly Curfew For Pubs And Restaurants - Temple Bar staff member Caoimhe Everard looks out the window after closing early in Dublin, Ireland. The new rules, which last until January 30, require hospitality venues to shut nightly at 8 pm, in an effort to curb the spread of Covid-19 and its highly contagious Omicron variant. Getty Images

Over the past two years, one of the most criticized sections of Irish society has been the 17- to 20-year-olds. What with high positive Covid numbers and social media footage of young people partying and drinking, they have been targeted by the self-righteous for their behavior and blamed for surges in infections.

However, what’s clear from recent studies is that for this cohort, life is not a bed of roses. In fact, it can be a crown of thorns.

Facts are, most will never enjoy the upward mobility that characterized their parents’ lives as Ireland has changed.

The problems facing young people in modern Ireland were put into stark relief by two reports released by the Economic and Social Research Unit (ESRI) in December, which showed how challenging society now is if you are young and especially if you are female.

“Growing Up in Ireland” is a government-funded longitudinal study of children and young people which is being carried out jointly by the ESRI and Trinity College Dublin. Their two current publications followed the lives of those born in 1998, allowing us to compare this cohort at age 17 and age 20. The latest questionnaire to gather data was carried out just prior to when Covid hit.

Having completed high school education, the over 5,000 young adults that participated in that survey were on different pathways as they transitioned into adulthood in a variety of home, work and education situations. Most had not yet reached financial or residential independence, and in that respect, a key feature was the extent to which the costs of essentials such as accommodation, health expenses, food, and utility bills were supported by contributions from the Bank of Mom and Dad.

Health wise, the reports looked at both physical and mental wellbeing. While most respondents classified themselves as healthy, there was a deterioration across the timescale.

Many had begun making unhealthy lifestyle choices with high rates of drinking and smoking and low rates of physical exercise. While it is accepted that 20-year-olds will experiment -- for instance, 60 percent had tried cannabis -- it does leave them open to future health problems.

There is a socio-economic aspect to this as well as young people from a working-class background were more likely to fall into the “unhealthy smokers and drinkers” category.

And in physical health, we have a significant difference between male and females, with more girls being overweight.

One of the most striking aspects of the report is the difference in sporting activity levels between the sexes. Men were over twice as likely to participate in team sports, and only just over half of young women achieved the physical activity guidelines recommended for a healthy lifestyle.

This, of course, is not a new phenomenon, and successive governments need to take the blame for a lack of sporting activity among young women. For many years now, a gap has existed in curricular provision for wellbeing at senior cycle level in Irish high schools, a life stage that has long been identified as a pressure point.

For instance, it’s accepted that by the age of 15 many girls have labeled themselves “not sporty” and are living by this label, with few attempts to counter it. The main barrier that stops girls from taking part is not feeling good enough to join in.

The major sporting organizations such as GAA, rugby, and soccer have made great strides in recent years to involve girls, but the fact is that not everyone wants to participate in a field sport. In the U.K., dance is the most popular physical education subject for teenage girls yet is rarely available in girls’ or boys’ schools here.

Our education system needs to allow for girls to take part in activities they enjoy and have fun with friends while being active. And for all the woke keyboard warriors lining up to scream “gender stereotyping,” let me say it’s about choice, opportunity, and outcomes.

In relation to mental health, one of the most troubling aspects of the surveys was that young women experienced a sharper decline in social and emotional wellbeing as they matured from 17 to 20 compared to their male counterparts.

The reports offer no reasons why this is so, but plainly it’s an area that requires further investigation. It is also another cogent reason to promote exercise as a means to improve mental health as well as physical health.

Regarding sexual activity, approximately one-third of the then 17-year-olds reported they had had sexual intercourse. However, of serious concern was that nearly a quarter expressed regret over the timing of first sex, and this proportion was substantially higher among young women with almost one-third wishing they had waited until later.

By age 20, only 16 percent stated that they were not sexually active, but again, the number of women that said it had occurred too soon was high.

This is a finding that can’t be swept under the carpet and reinforces a range of earlier studies that concluded that young girls were being pressurized into having sex by peer groups and media manipulation. This cohort is more likely to experience crisis pregnancy, contract a sexually transmitted disease or seek an abortion.

While acknowledging that there is a problem, the response has been less than ideal. A health service site, B4UDecide, set up to encourage teenagers in a non-judgmental way to make informed decisions about relationships and sex, is hopelessly out of date and gives a contact number that is no longer in use. It was established, it must be said, in a blaze of publicity, but then that just sums up the attitude of official Ireland: if an announcement has been made then the problem has been solved.

These reports are of great value in that they establish what is typical and normal but more importantly what is atypical and problematic. While they raise challenges for the creation of effective government policies at the individual, family, and community level, it is by no means clear that there is a willingness to respond.

With Covid, life has not gotten any easier for this age group. The natural expansion of networks post-high school has not taken place, and other coping strategies and rites of passage have either been cancelled or strictly curtailed. These include socializing, access to community activities, birthday parties, organized sport, and cultural activities.

Once again, it appears to hit women harder, with evidence of a greater prevalence of low mood or depressive symptoms among females. This is all coinciding with a shortage of psychologists in vital services, and experts within the health service predicting a “tsunami of mental health problems” in the aftermath of the pandemic. A tsunami that we are ill coped to deal with.

So next time you see a group of young people hanging out or having fun, cut them some slack as these are not the best days of their lives.

*This column first appeared in the January 5 edition of the weekly Irish Voice newspaper, sister publication to IrishCentral. Michael O'Dowd is brothers with Niall O'Dowd, founder of the Irish Voice and IrishCentral.