Ireland’s Covid Christmas 2021 is lockdown in all but name

"Let’s hope for the best during this Christmas week 2021, but a nagging voice in the back of my head says that we have heard all this before." 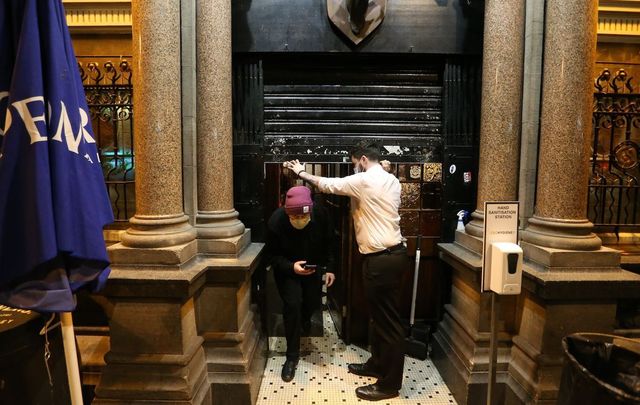 Twelve months ago, Christmas 2020, saw the rollout of the first vaccine and a promise by business leaders here in Dublin of better days ahead for those firms left reeling by nine months of Covid restrictions. All that had to be done was to display resilience and overcome the immediate Covid challenges.

The reality was somewhat different, and 2021 was a very challenging time for business with many surviving thanks only to government support and an expectation of better times ahead.

However, with the increasing uncertainty over the impact of the Omicron variant, and the new restrictions imposed over the festive season the mood is slowly turning, once again, to gloom and pessimism.

Hospitality is the industry most badly affected by the current wave of the pandemic. It has been described as the sector that has been the worst hit, the hardest hit, and the longest hit. It is a key component of the Irish economy worth up to €7.6 billion annually and employing an estimated 180,000 people.

Even before the latest announcements, public behavior had changed with reservations in bars, restaurants, and hotels plummeting after the government’s National Public Health Emergency Team (Nphet) said that canceling social plans in the run-up to Christmas would be a responsible decision and that people should limit their social contacts.

Along with widespread cancellations of work parties, people had just stopped going out with city and town centers eerily quiet for December nights. One restaurant in Donegal for example, on Thursday of last week, had no customers for the first time in 21 years.

For hospitality, it had become a lockdown in all but name, but now with the new regulations announced last week, closing pubs and restaurants from 8 p.m. it has effectively become a curfew.

Previous derogations for Covid passports and outdoor dining are shelved. Shellshocked business owners with Christmas stocks already bought in are in despair with significant layoffs expected this coming week.

Equally badly hit has been the retail sector. Non-essential shops have had to endure the longest lockdown across Europe earlier this year and now further curtailment in customers with a government recommendation of a return to home working. In Dublin City center footfall is down by 30 percent on 2019 levels as people continue to steer clear of the capital.

Additionally, retailers have had to deal with increased cost of trade, severe weather disruption, lack of tourists, and having to contend with the blockade of city streets over two days recently which was caused by a truckers dispute. The timing of these events was disastrous. Dublin Town, an organization that represents retailers, stated that a third of their annual turnover occurs in the six weeks up to Christmas.

These are exceptional challenges with a not-so-bright future for brick and mortar stores as Covid has accelerated the shift to online shopping heralding changing consumer behaviors and attitudes.

Some businesses are responding to this. Ireland had over 5,500 new e-commerce sites setting up during 2020, the latest figures available. Impressive when set against the total for the U.K. for the same period which was 85,000.

Yet no respite is forecast. Storm clouds are gathering for retailers in 2022 with inflation in Ireland predicted to peak at six percent by mid-year. This grim forecast follows latest official figures showing the annual rate of inflation hit a 20-year high in November, with consumer prices up 5.3 percent year-on-year.

Rising product costs and consumers worried about finances post-pandemic all point to a perfect storm with retailers having to absorb additional pain in the short to medium term. But there will be no relief for consumers, with the industry group Retail Excellence warning that there will be higher prices in shops from next spring on.

Retail and hospitality are not the only sectors facing into the coming year with trepidation. It’s reported that employer organizations have been called in by the government and briefed to expect a lockdown in the middle of January.

And it’s not just Covid that threatens the Irish economy. Rising fuel and electricity costs are also having an effect.

This week, Premier Periclase Ltd, which employs 94 people in Co. Louth, sought the protection of the courts due to difficulties caused by the rise of gas and energy prices which have doubled between 2020 and 2021. The company owes Bord Gais €2.5 million and electricity supplier Energia €900,000. They won’t be the only firm that will buckle under these inflationary pressures.

Companies will also have to deal with supply chain problems, access to staff, and of course Brexit which once again has hit the headlines with the resignation last week of the British cabinet minister who was negotiating with the EU.

The sticking plaster that has held it all together has been Irish government financial support to employers and employees. The pandemic has not yet been characterized by widespread company failure owing to the unprecedented level of this direct fiscal support including wage subsidies, tax and payment deferrals, grants, and access to loans. Some 80 percent of small to mid-sized businesses have received at least one type of support over the last 12 months.

This has been hugely expensive on state coffers with estimates now that it could cost up to €1 billion a week to support business in the fight against Omicron. At some stage, there will be a day of reckoning.

With such widespread and generous payments, it is little wonder that there has been abuse. The fast-track pandemic unemployment payments have been exploited with unscrupulous individuals and organized gangs claiming money when they were not qualified.

In one case, a member of the notorious international fraud organization Black Axe claimed the payment while languishing in jail. Elaborate email scams were carried out which led to people unwittingly giving personal information that was then used to make claims.

Payments to business have also come under scrutiny. Almost €50 million was recovered by the Revenue Commissioners from companies that had incorrectly been paid wage subsidies. The holding group for Mercedes Ireland came in for widespread criticism when it was revealed that they paid dividends to their shareholders of almost €1.8 million having received a similar amount, legally, in Covid support.

The government has promised to close loopholes, though over 20 months into the crisis it’s a case of bolting horses and stable doors.

But for some looking at the business environment, it’s a case of a half-full glass. IBEC, the body that represents Irish industry, has stated that after Covid and inflation washes through in early to mid-2022 the outlook will be much sunnier.  They forecast that despite ongoing competitiveness pressures, growth will run at a rate of six percent, with unemployment falling rapidly to pre-Covid norms and strong tax returns.

Let’s hope for the best during this Christmas week 2021, but a nagging voice in the back of my head says that we have heard all this before.

*This column first appeared in the December 22 edition of the weekly Irish Voice newspaper. Michael O'Dowd is brother to Niall O'Dowd, founder of the Irish Voice and IrishCentral.