"Pro-choice women are called to refuse to attend work on March 8 as part of direct action to make the Irish government finally pay attention." 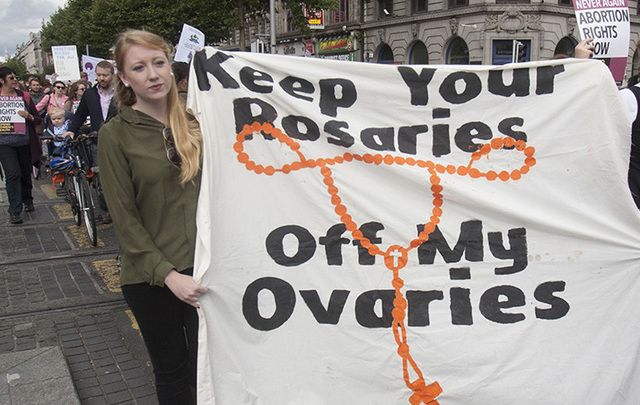 Pro-choice women in Ireland are demanding a referendum on Ireland's abortion laws. RollngNews

For those of us who decided that there was no point in making outrageously unachievable New Year’s resolutions, January of 2017 was already doomed. The year has already presented us with the worst month imaginable, so I’m glad I set my expectations low.

While some friends of mine embarked on nonsensical missions of “dry January” -- otherwise known as a means to elevate self-worth in relation to your less functional companions -- I proceeded to burn my hard-earned money on food and alcohol in the same fashion in which I spent 2016.

While others began taking up healthy hobbies such as exercise and meditation, I burrowed into several lengthy Netflix binges in order to escape the harsh, brutal reality that is our misfortunate world.

Treating myself to burgers, champagne and an emotional 10 hours watching Parenthood may seem ridiculous -- and that’s because it is -- but can we be blamed for needing a little self-indulgence?

How do we find comfort and hope in a world where we are presented with a president and political climate that feels an awful lot like a giant leap backwards, an undoing of previous generations of work, and a giant slap in the face?

Only a few days ago, on January 21, millions of women across the globe stood in protest of Donald Trump. The following day, American women in particular celebrated the triumphant anniversary of Roe v. Wade. And a mere 24 hours later, on the 23rd, the man that was elected to allegedly make America great again reinstated an abortion restriction from the 1980s.

So, by “again,” we can take it that he is literally operating retroactively, restoring archaic laws that took decades to undo.

This policy was first established in 1984. By reinstating this harmful and life-threatening global gag rule, U.S. funding is now prevented from going to foreign aid groups that even discuss abortion.

Surrounded by men, Trump signed off on an executive order that will prevent funding for the likes of Planned Parenthood, pivotal organizations that are key for American women’s physical and mental health.

According to a report released on Monday by the Center for Reproductive rights, if Roe v. Wade is overturned, there are only 17 states that could continue to offer abortion services. That means more than 37 million women in 33 states stand to lose their right bodily autonomy.

Throughout my first few years living in New York, I lost count of how many women I had to explain the abortion laws of Ireland to. How many women were stunned by the power of religion and constitutional law on our little island that sent an average of 12 women a day to the U.K. for access to abortion -- the lack of which the UN considers a violation of women’s human rights.

Now, women my age in America will have to face the panic, fear, and anxiety that comes with those rights being revoked, and are gaining a new and unwelcome understanding of an Irish woman’s situation. In Ireland it is a criminal offense to have an abortion, and women face up to 14 years in prison if they do. What has, since 1984 been an accessible right here, is still a crime punishable by imprisonment back home, and now America is regressing too.

The sea of pink hats that have taken over the media in the wake of Trump’s inauguration are the only thing providing a lot of us with any hope at all, and the protests are scheduled to continue -- including Shia LaBeouf’s four year protest which will undoubtedly provide a welcome distraction from the White House burning to the ground at the hands of Madonna.

NEW POST // After Four Million Attend a #WomensMarch on Seven Continents, What Do We Do Next? -- https://t.co/PfEhQXsXYp #WomensRights pic.twitter.com/IylrkItlRM

In more sensible and uplifting news, Irish women will be donning their protest-pink again on March 8, as an ad-hoc independent group of artists, activists, academics and alike have declared a strike. Pro-choice women are called to refuse to attend work on March 8 as part of direct action to make the Irish government finally pay attention.

The strike calls on all Irish women to book a day off work as annual leave and to take to the streets wearing all black in solidarity. For women who are not currently working, the strike asks them to withdraw from any form of emotional or domestic labor, giving examples such as housework or caring duties -- any role which is traditionally and disproportionately performed by women.

A statement released by organizers Strike 4 Repeal says, “We are an ad-hoc, non-affiliated group of activists, academics, artists and trade unionists preparing a nationwide Strike for Repeal on the 8th of March 2017. Our demand is that the Irish government call a referendum to repeal the 8th Amendment by the 8th of March. If not, Ireland will strike.”

Judging by the millions of men, women, and children who turned up to show their support for women, and for each other on Saturday, January 21, my guess is that there will be a strong, thunderous crowd in Ireland on March 8 making their voices heard.

In the same way that the London protests showed solidarity by lining up in the streets with suitcases to represent the thousands of women who fly, sail, and drive to the U.K. every day, women in Ireland are now called to strike and leave work, to show solidarity to those women who don’t have a choice.

Time to shine up your best black boots and get marching. It looks like that’s what we’ll be doing for the next four years in Ireland, and the U.S., so let’s do it together.

Wondering *how* to strike on March 8th? Here are some guidelines! #strike4repeal pic.twitter.com/TEWI9Ass9S