Sinead O’Connor’s public experience of mental illness is a glimpse of what millions of people around the world also feel and go through, often in secret. 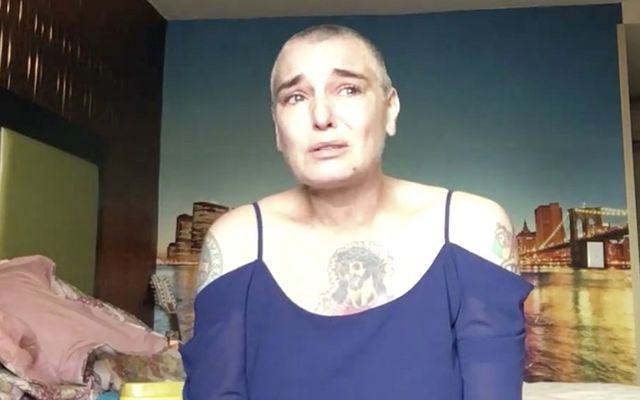 I've always enjoyed Sinead O'Connor's music. My two favorite songs are: "This Is a Rebel Song" and "Haunted," a duet she recorded with Shane MacGowan. Both are pure magic. Her performance with Roger Waters on the song "Mother" and her recording of the classic "I Don’t Know How to Love Him" follows closely behind as favorites of mine. She is a brilliant singer and songwriter.

Sinead has been very open about her struggle with mental illness. In 2007 she told "The Oprah Winfrey Show" she had been diagnosed with bipolar disorder in 2003.

This weekend I watched a video she posted to her Facebook page on Friday and it not only concerned me, it also my broke my heart. The video is difficult to watch. She clearly was in a very bad place when she recorded the video and I felt terrible that she was alone. She said she was recording the video from a Travel Lodge in New Jersey, the same state I live in.

I was worried about Sinead as I went to sleep Saturday night. I wished she wasn’t alone and I wished she had a good support system. When I woke up on Sunday I still felt helpless as I placed a call to the South Hackensack Police Department in New Jersey asking if they would check on her. I was thankful when an officer told me they were, in fact, aware of the video and they were “monitoring the situation.”

Read More: Sinead O'Connor's mental illness should not be the latest celebrity scandal

Sinead has four children and last year she lost custody of her 13-year-old son in Ireland. This clearly has caused her a tremendous amount of pain and loss. She said she recorded the video to show people what it’s like to live with a mental illness:

“I’m making this video because I’m one of millions. I'm fighting to stay alive every day. I have a good heart even if I've been an asshole. I'm begging for somebody who loves me to come and get me. This is no way for people to be living and I'm one of millions. Why are we alone? We can't take care of ourselves. We're not like everybody else."

Sinead is right ­­– she is one of millions suffering from a mental illness.

People who struggle with a mental illness, especially an untreated mental illness, often push others away. It is not easy to live with and look after a loved one with a mental illness. I've been there, as I wrote about last week for IrishCentral, and I know it's a challenge. You will get exhausted. It can be a living hell. They can hurt you with their words. They can frustrate and wear you out. If they are not medicated or they go off their medication, it's that much more difficult. And if they self-medicate it will only get worse from there.

They still need our help.

We have to remember it’s hell for the person who has mental illness and that they didn't ask for it. If they had cancer or a broken leg wouldn't we still care for them? They desperately need our love, support, and compassion as family members, as a community and as a nation.

In the United States, it's not easy to have someone admitted to a hospital for treatment if they refuse to go. Many parents have been forced to lie and say their children were a threat to them or themselves in order to get them the proper treatment. In America, once in the hospital, because of the HIPAA Privacy Rule, parents may not receive necessary information regarding their child's (age 18 and older) condition if they refuse to sign a release. Parents may take their child home with them after they are released, and they may not have the necessary information regarding their condition, what medication they've been given or any other pertinent information relating to their condition. They may not even be told when their child’s next follow-up appointment is.

If someone is in a crisis like it appeared Sinead was, they may be taken to a hospital for a short term stay and then released. It can be maddening trying to get help for someone in America and the system continues to fail many families.

Too often we only hear about mental illness when a tragedy strikes.

Virginia State Sen. Creigh Deeds survived being stabbed multiple times by his 24-year-old son, in 2013. His son, Gus, suffered from bipolar disorder and had been turned away from a mental health center for lack of an available psychiatric bed. Gus returned home and stabbed his father with a knife and then shot himself.

Sinead begged, “I’m begging for two years for somebody who loves me to please come get me. If you have a family member it doesn’t matter if you’ve already abandoned them, go get them. Be good and be tender to them. I’m doing the best in the world like everybody else.”

As difficult as the video is to watch, seeing Sinead in that condition is a glimpse of what many people with mental illness in America and Ireland go through. It’s also a reminder of how important it is to have a support system in place and how unfortunate others are who do not.

Kathleen Maloney is currently working on a book, "Twice Lost," about her husband’s struggles with bipolar disorder II and how finding her roots in Ireland after his death helped her to heal.  Learn more on her website.