You'd be forgiven for thinking "Whiskey on a Sunday" is an Irish tune - but it's actually not! 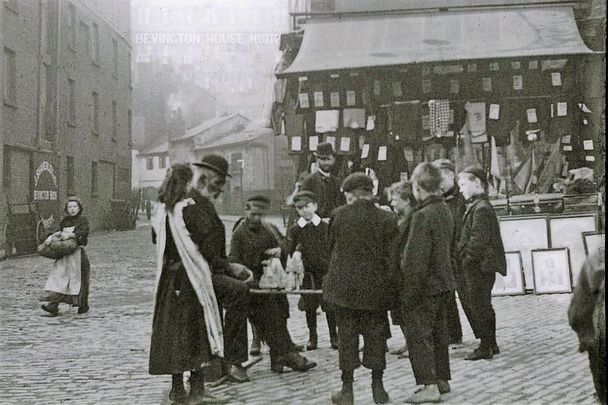 From a lantern slide circa 1900. "Seth Davy", a black street entertainer from Liverpool, immortalized in the song "Whiskey on a Sunday." Public Domain

Whiskey on a Sunday is a favourite song in the Irish Folk scene but, it has no connection to Ireland!

The song was written by Glyn Hughes in Britain during the late 1950s. Hughes was born in Liverpool in 1932 and died tragically young in his hometown 40 years later. He was a well-known folk singer in the North of England during the British folk revival of the 50s and 60s.

The song is often called Whiskey on a Sunday, but its correct title is The Ballad of Old Seth Davy.

Seth Davy was a popular street entertainer in Liverpool in the 1890s. He was a sailor from Jamaica but became a fixed character on the streets of Merseyside where he entertained people, especially young children, with his three dancing dolls which he crafted himself.

The famous dancing dolls were attached to the end of a plank of wood which Seth would tap with his hand to make them dance while he crooned songs from his Caribbean homeland.

Seth Davy's stage was the street outside Bevington Bush Hotel on the north side of Liverpool city. The song he sung most often was Massa is a Stingy Man. The lines from that song would later be used by Huges when he was writing his tribute to Seth Davy - 'Sing come day go day, god send Sunday, we'll drink buttermilk all the week, and whiskey on Sunday.'

There are two versions of The Ballad of Seth Davy. There is the original one written by Glyn Hughes and there is an Irish one replacing the Liverpool placenames with Dublin ones.

When you hear the song performed in Ireland you will notice the lyrics are altered such as Bevington Bush replaced with Beggars Bush.

It is not known who or when the lyrics were altered to suit Irish ears but the song has been recorded by many artists in Ireland such as The Dubliners. In 1968 Danny Doyle reached the No.1 spot in the Irish music charts with the song and stayed there for ten weeks!

The Ballad of Old Seth Davy ends on a rather sad note as we are informed he died in 1902. His famous dancing dolls were thrown in a jowler bin (Liverpool slang for a bin which was situated in alleys in the back of street houses) while the plank they danced on was used to patch up someone's door.

Although Seth Davy has long since departed this world and the creator of the famous song has too passed on, the memory of the 19th-century Jamaican street entertainer will live on in song - whichever version of it that is sung!

The Ballad of Old Seth Davy - by Glyn Hughes

He sat at the corner of Bevington Bush,  Astride an old packing case, And the dolls at the end of the plank went dancing,  As he crooned with a smile on his face.

CHORUS: La, la, la, la, come day go day, wish in me heart for Sunday, drinking buttermilk all the week, and its whiskey on a Sunday.

His tired old hands drummed the wooden beam, and the puppets they danced the gear, a far better show that you ever would see, at the Privvy or New Brighton Pier.

In 1902 old Seth Davy died, His song it was heard no more, the three dancing dolls in a jowler bin ended, the plank went to mend a back door.

But on some stormy nights down Scotty Road way, With the wind blowing in from the sea, you can still hear the song of old Seth Davy, As he croon with his dancing dolls three.

Check out one of the most famous covers of Whiskey on a Sunday by The Dubliners here: