What’s so bad about ethnic fraud?

People have played "identity games" for centuries, some for more complex reasons than others. 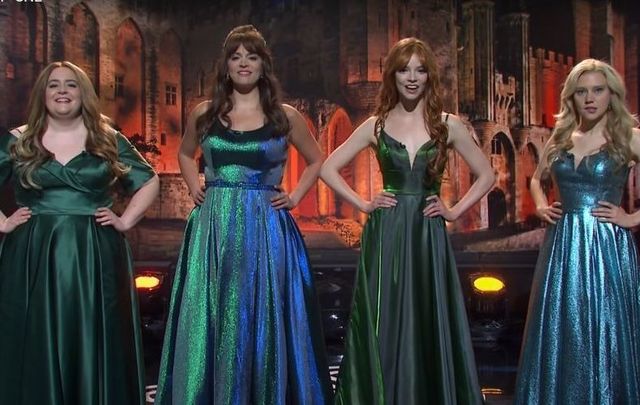 If you happened to be in Oklahoma last weekend, you could have stopped by a Tulsa "Celtic Rising" fundraiser at VFW Post 577.

The "family-friendly event" was held, as a social media publicity post put it, "to support Veterans of Foreign Wars" and featured "live Celtic music, Irish dancing, bagpipers, a demonstration of live armored combat...a visit by King James V and his Royal Court...a reading of famous Irish and Scottish poems, a whiskey tasting curated by an expert, and a historical demonstration of Viking culture."

It does require a broad definition of things to represent the Celts in general -- and the Irish in particular -- this way.

The fact that one of the participating AOH divisions is named after “Bobby Sands MP” only makes things more interesting.

Then again, the famed Northern Ireland hunger striker and his supporters did know a thing or two about fighting “foreign wars.”

It’s a little like what Saturday Night Live was mocking a few weeks back with their Celtic Woman bit.

“The Lion King for Karens,” they called it.

If you go in for that sort of mockery.

A new concern along these lines was the subject of a fascinating and hilarious, absurd and gripping, must-read New York Times Magazine article about ethnic fraud.

“To an escalating degree over my adult life, I have eschewed my lived experience as a white Jewish child in suburban Kansas City,” a history professor recently posted on social media, the article notes.

The prof had “for years identified, and published, as a black and Latina scholar.”

“I have thought about ending these lies,” she continued, “but my cowardice was always more powerful than my ethics.”

Translation? I said I was black and Latina. I’m not.

This brings to mind the famous case of another academic, Rachel Dolezal, who famously “identified” as black, when she was not, and was the focus of a barrage of criticism.

The whole point of claiming this identity, critics charged, is to have lived the adversity that goes with it.

Of course, there are many identity games people have played for centuries, for far more complex reasons. Later this year, Irish actress Ruth Negga will play an African American who secretly lives as a white woman in the Netflix movie Passing, based on the celebrated novel by Nella Larson.

We’ve all met folks somewhere in the middle. The angry Trump supporter who rages against welfare because “my Irish ancestors were slaves, too.” But, you know, they got over it.

Or the mystical hipster who orates on the “storytelling tradition of my Irish ancestors.”  Before rocking to more Celtic Woman, presumably.

The recent Times story was about Andrea Smith, a scholar whose entire career was based on her Cherokee roots. Even though she had none.

Yet, no one really knows what to do about it.

One observer tried, posting the whole messy saga online, “the first of many times (Smith) would be ‘outed’ over questions about her identity.”

The title? “When Does Ethnic Fraud Matter?”

Does that mean there are times when it’s okay?

Then again, should we really be surprised by this?

The broad field of ethnic studies -- which includes Irish newspapers and websites, by the way -- exists based on the premise that people of a certain background have a special perspective on important topics.

Entire careers can be built on it. So there is a strong incentive to, um, stretch the ethnic truth.

Especially when the alternative -- even with all the privilege that comes with it -- is just plain old “white.”

And so, if gender and family roles are merely “social constructs,” not fixed but fluid, why not ethnicity also?

Maybe “fraud” is just another form of freedom?

Either way, it’ll be some time before all of this, um, passes.

*This column first appeared in the June 9 edition of the weekly Irish Voice newspaper, sister publication to IrishCentral.