Celtic Woman gets the SNL treatment

"Witness Irish culture the way it was meant to be enjoyed... in Ohio," SNL's parody of a Celtic Woman commercial said. 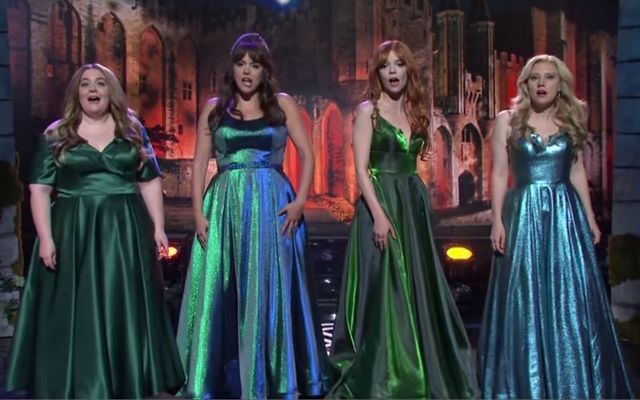 "Witness Irish culture the way it was meant to be enjoyed... in Ohio," the mock commercial said.

"These flat-iron maidens bring you on the sexual eye contact journey of a lifetime," the commercial continues.

The commercial advertises "eight deep-cut Gaelic battle songs", some "loosely authentic originals", and a "random assortment" of non-Irish songs that "the audience just kind of wants to hear".

"If you like Riverdance but wish that they could move their arms, you'll love us," says one of the performers.

The four performers sing a high-pitched, Irish-inspired version of Lynyrd Skynyrd's "Sweet Home Alabama" for one of their non-Irish songs, while their "loosely authentic original" simply comprises of directions to a local castle.

The three-minute skit also poked fun at the type of audience members who flock to Celtic Woman concerts.

"If I had to describe it in one word, I would say Ireland," one SNL actor says while dressed as a cardigan-wearing fan after a Celtic woman concert.

"It was genuinely the most fun I've had in my life. I don't know what that says about me, but it's true," said another fan.

Other fans include a man who thought he was attending a Boston Celtics game and a man who appeared to be more interested in how the women looked than how they performed.