Joe Biden needs to follow the advice of famous author Robert Frost and "be more Irish than Harvard". 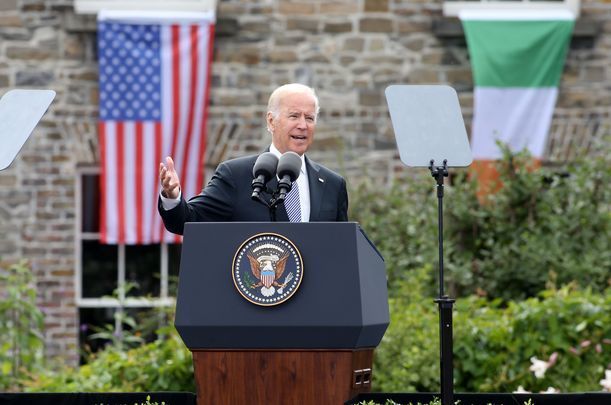 It was more than three decades ago that Biden first ran for the White House. It was kind of a different world.  Communism and nuclear annihilation were still a thing.

And now, here we are.

Either way, you wanted it, Joe. You got it. Biden will deliver his inauguration speech on January 20.

At this point, we have no choice but to be grateful if Biden gets out any words at all because that means our new (old) president was not bound, gagged, and kidnapped by a marauding band of protesters out of Mad Max’s Thunderdome.

Assuming such a hellscape does not unfold -- again! -- it would make sense for Biden to look to one of his Irish American idols -- John F. Kennedy.

But none of this “ask not what your country can do for you” business.  Right now, I’ll take a pass on asking folks to do something for their country. Stuff like that got us into this mess.

No, if Biden is going to look back to 1960, he should ponder the poet Robert Frost’s famous advice to JFK.

“Be more Irish than Harvard,” the author of “The Road Not Taken” said.

I’ve never quite understood what Frost meant.  Now is a great time to try and figure it out, since both liberals and conservatives need to try something new, given how crappy the last four years have gone.

As weird as it might sound, the rage on display in Washington last week is actually the result of a certain American kind of optimism.  A kind, I suspect, is doled out in heaping doses at places like Harvard.

Such a high level of anger suggests there once must have been great hope, only to be met by what is perceived as some grand betrayal. The only way to regain that great hope is through rage.

Even Frost’s most famous poem suggests a simple decision at a fork in the road can “make all the difference.”

And so, not surprisingly, many of the same attributes can be found among Trump's more energetic enemies. To hate him so much, to love Biden or Kamala Harris so much, suggests there is some kind of hope that these folks can actually perform miracles.

Do you think that’s a good thing to expect in the next four years?

Now that I have made wildly generalized statements about America, allow me to move on to the Irish.

As a decidedly older culture, you see a certain world-weariness among certain Irish.

But before my friends from Cork or Kerry get all culturally superior, it should be noted that Ireland has developed this admirable cultural trait with a population notably tinier and more, um, homogeneous, than America’s.

Anyway, it could be that a hybrid model does the trick here, a certain kind of Irish American. In the age of Sean Hannity, mere roots in the old sod won’t do.

I’m thinking of the old Irish machine politician. Can you imagine someone from Tammany Hall storming the U.S. Capitol?

Not really. Because for all of their naughty corruption and thievery, they understood that it is a touch naive -- too hopeful, too Harvard -- to see this politics business as life or death.

Yes, it sometimes is. There are people cruelly denied the essential stuff of life.

But such structural problems require structural solutions. Spurts of rage can draw attention to crucial matters. But the boring work of government has to take time to (inadequately) address the issue.

And that’s when things work best!

Another poet once lamented about times when the center cannot hold, when the best lack all conviction, and the worst are full of passionate intensity.

The poem only works -- is only Irish -- when you realize that those times are all times.

If we get that from Joe Biden, it will make all the difference.