For this Jew born in Brooklyn old fashion saloons, mainly Irish, are a tonic and a treat. 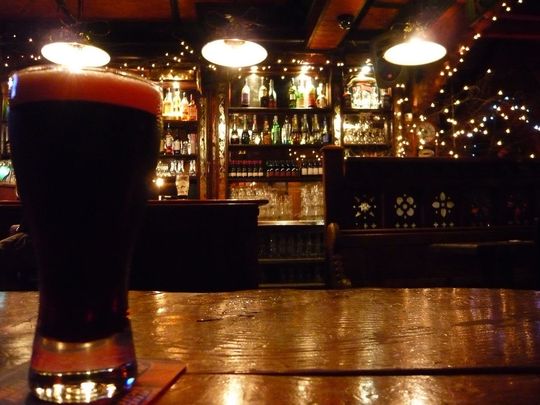 From the characters who choose to drink there to the caring owners and staff who make the atmosphere so welcoming, there's nothing like an old American saloon and they're dying out.

My pal Tom, born in Ireland,  runs one of my favorite saloons, the Duck Inn in Westchester County, New York. A real character I’m honored to call my brother.

He taught me that St. Paddy’s day is the high holy day. Google him the entire saloon is decorated with ducks,  his obsession.

The Duck is a blue-collar, working man's saloon that attracts some eccentric genuinely weird screwed-up characters and alkies.

An oasis for salt of the earth folk in a community of exceptional wealth where way too many people have more money than joy or happiness.

A poster of white privilege and many households that are families in name only.

One of the regulars frequents The Duck after work.  He mows lawns for the school district and plows snow wintertime. Lovely chap who distinguished himself among the regulars by spurning peanut bar snacks in favor of kibble and dog biscuits.

I once told Tom that I fell in love with The Duck and he should have a cover charge because the regulars are so entertaining and therapeutic.

No matter how lousy I might feel sometimes, when I walked into the joint, a few hours drinking with his eclectic meshuggah (aka nutsy crazy) clientele made me feel like a million bucks when I walked out.

Always ever so grateful that all my troubles are inconsequential... I’m ok and nowhere near as lost as some of them are.

The LT is another joint in ritzy Westchester County that was a great saloon for me for several years that is no longer. While it’s still in business it’s not a saloon anymore. Saloon lovers might describe it these days as a fern bar.

Antiseptically clean designer decorated place that serves high-quality cuisine, wine, spirits, and beer. The food there is not prepared by a cook, a chef prepares the cuisine.

Sad to say it’s bereft of any soul, spirit of camaraderie, or what the Germans call gemütlichkeit. It’s a sterile place without a personality.

The previous owner, PC, was adept at running a saloon with a strong personality, starting with his that imbued all who worked there.

The bartenders, waitstaff, and cook all exuded it. They showed concern and cared about you as a person, not a customer.

PC and his crew were guys and gals were fun people whose company I enjoyed.

Speaking of saloons, if you haven't read Pete Hamill’s gem “A Drinking Life” it’s a must-read.

For as long as I can remember saloons have held a strong attraction for me.

It’s the pull of the exotic for me - not the drinking as much as the social hall atmosphere as I imagine the pubs in Ireland are.

Recently the Northern Irish government became concerned that senior citizens were becoming shut-ins not visiting their pub haunts in fear of getting ticketed on their way home for driving under the influence. Further study revealed that some senior citizens were mentally deteriorating for lack of socialization.

The authorities knew full well it’s the camaraderie and social town hall nature of pubs which is the purpose and meaning of pubs in Ireland. Booze is the icing on the cake.

The powers that be were well aware of the seniors in question.

Many were living alone on modest pensions and could ill afford enough pints to get loaded. More likely they’d have a nice cuppa and a bite to eat.

So alien to my experience as a Jew born in Brooklyn.

My tribe’s adult members of the 1950s and '60s were either first-generation Americans or emigres from the pogroms of Tsarist or Communist Russia and Eastern Europe.

Their priority was camouflaging themselves as Jews in public. Their strategy was assimilation as ‘real’  Americans no different than anyone else.

Their tactics were plastic surgery and name change.

Plastic surgery created an outward appearance that blends and functions as camouflage.

Exchanging the name born with to one that sounds completely American.

Jews are born with two names; their Hebrew name and in the local language of their birth.

Many emigre Jews had three names; the two they were born with and a new completely anglicized one.

Or they kept their original names but gave their children born in the God-blessed USA the traditional Hebrew name and a name so American it was unrecognizable as anything other than the real McCoy.

Boris Thomashefsky was born in Kiev. Boris emigrated to the lower East Side of New York, never changed his name, and became a superstar of Yiddish theater, the great Tomashefsky.

The coda I grew up with was: keep your nose clean and attract no attention to yourself being a Jew. This was self-preservation safety in a country with no shortage of anti-semite bigotry that sadly continues to this day.

Making a spectacle of yourself drunk in public was disgraceful because it gives bigots reason to hate us even more.

Our alcoholics got loaded in the privacy of their homes, never in a bar or any public venue.

Saloons were forbidden fruit, so of course, I would explore them and fall in love with the atmosphere.

Along with people watching which is first-rate entertainment, these are all to be found in first-rate saloons.

McSorleys Ale House, the oldest continually operating saloon was my gold standard of saloons in my youth studying at Baruch College.

McSorleys was located nearly midway to meet my pals attending NYU, The New School, and School of Visual Arts.

Patrons there were perfect for someone who believes people are the best entertainment- a mixture of Damon Runyon-type local characters, college kids, and tourists.

The place had antique urinals so gargantuan you could walk into. Some overly inebriated men mistook them for showers, walked in a tried to take one to sober up.

Before the women’s movement brought McSorleys into the modern era this archaic saloon was for men only.

No distractions allowed to interfere with the business at hand.

When they finally relented to join the 20th century they allowed women in but did not provide a ladies necessary.

So some of the ne’er do wells and reprobates would join the ladies who heeded the call of nature.

One evening the stools at the bar were all taken.

When one opened up I asked the gent next to me if he’d like to have the stool.

He stuck out his hand, and said the following:

“Thanks no, my name’s Jim Cohn, I’m not a Jew, I’m in my drinking position since this joint opened this morning and if I sit down I’ll be drunk”.