The Biden Administration's decision to end sweeping sweeping asylum limits at the US border from May onward has created problems for border-region Democrats. 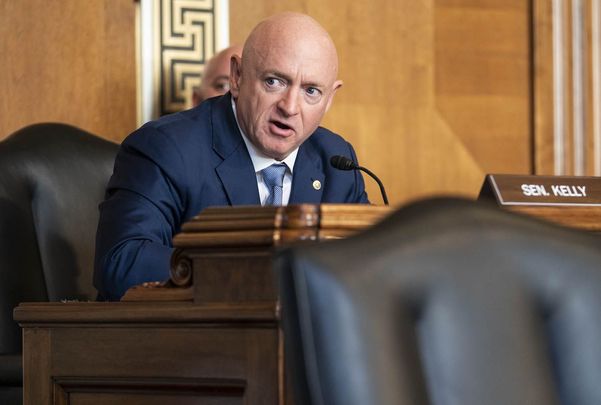 Senator Mark Kelly: “This is a crisis…because of a lack of planning from the administration.” Getty

There is worry in the land, once again, about “the border.”

“The Biden administration’s decision to end sweeping asylum limits at the border this May… creates thorny political challenges for border-region Democrats who face the likely prospect of an increase in migrants,” the AP reported this week.

Even Irish American Arizona Senator Mark Kelly said, “This is a crisis…because of a lack of planning from the administration.”  And he’s a Democrat!

Which is fair enough. There’s no reason to pretend immigration is neat and easy. The Irish know that – or should – better than anyone.

A great book will one day be written about the many (sure, alleged) crimes of George Bratsenis.

The short version of which, according to The New York Times, is a “Tarantino-esque odyssey (that) spans at least three states and Canada and includes the killing of a drug courier known as the Turk, ties to organized crime and a bizarre failed jailbreak bid.”

Now, Bratsenis has been “implicated in a murder-for-hire case… that many in New Jersey’s political class think could grow into the state’s next big public corruption scandal.”

Bratsenis’ colorful life includes serving as what the Times called “muscle” for an Irish American named “Larry Hogan, a retired Stamford police lieutenant and longtime target of law enforcement scrutiny over his suspected ties to the drug trade and organized crime.”

Back when Hogan was on the job, there were multiple allegations, in the Hartford Courant, Connecticut Magazine, as well as the Cool Justice Report, of ties to the Gambino crime family and gun-running to Northern Ireland.

Would the Gambinos work with IRA guys with names like Hogan? For years they did just fine with a band of Irishmen called the Westies.

We’ll see how the Bratsenis’ case shakes out.  But it’s more than a little ironic to hear so much concern about today’s immigrants when the children of Ellis Island are still walking on the wild side.

Also last week, celebrity chef David Ruggerio fessed up to Vanity Fair that he was “living two lives,” which included cracking skulls for the Italian American mob. His mentors included Egidio “Ernie Boy” Onorato, who reportedly once whacked a federal informant with the distinctly non-Italian name of Anthony Finn.

Then there’s another long, fascinating read, in this month’s Philadelphia magazine, about John Dougherty.

“Johnny Doc,” as he is known, is “head of the Local 98 electricians union and arguably the most powerful person in Philadelphia,” writes David Murrell.

Doc “was set to stand trial for corruption” last year on “charges, unveiled two and a half years before in a 116-count indictment, (with charges) so abundant and varied that they had to be split into two trials.”

Doc’s union made headlines – in 2017, not 1917 – for pondering an endorsement based on, among other things, “one candidate's Irish heritage,” as a published report put it.

The “electricians union … is leaning toward Jack O'Neill in the crowded Democratic primary for the city's next district attorney,” wrote Ryan Briggs, before quoting “a source close to the Democratic City Committee.”

Perhaps it’s also an Irish thing that Johnny Doc does not seem all that worried.

“The possibility that (Doc) might be about to lose his own independence seemed far from his mind…he had all the delirious confidence of a heavyweight champ entering the ring. He waved to the media scrum before him and flashed a wide smile, lips covering his teeth. He cracked jokes in his nasal South Philly accent.”

But neither should we forget the distinctly Irish contribution to the American underworld, using respectable positions to do disreputable things. Allegedly.