More and more these days, we seem to be united by exactly one thing – hate.  Okay, and maybe some rage and fury, too. 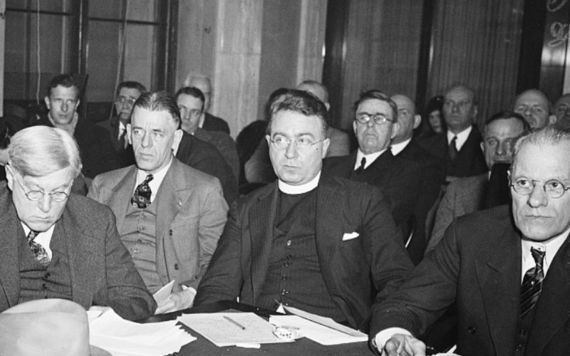 Irish-American priest Fr. Edward Coughlin was a vocal supporter of Nazi Germany and Fascist Italy in the 1930s. Picryl

Remember the good old days? Back when, if you were Irish Catholic, you only had to duck your head in shame at very famous Hibernians who’d made a name for themselves by spreading fear and loathing.

You know the roster: Father Coughlin, Joe McCarthy, any number of ruddy faces of Fox News.

Well, times are so crazy these days that folks are digging up more obscure skeletons in our collective Irish closets.

Recent headlines about anti-Semitism have inspired people to share discoveries of various more obscure – and quite Irish – anti-Semites from the not-too-distant past.

First, there was Charles Gallagher's very disturbing book about the “Nazis of Copley” Square in Boston.  They stockpiled arms, spoke approvingly of Nazis, and if you search long enough on Google you can find a black-and-white photo of stately Chestnut Street, with a giant swastika flag hung out for all to see.

Now there’s a revival of interest in the ravings of Denis Fahey, a Tipperary-born priest who inspired the aforementioned Charles Coughlin in the 1930s

Fahey’s “writings…are back in print, and his claim that communism is a plot to create "a world-state in which the Jewish race will be supreme’ and ‘have control of the wealth of the nations’ is finding a new audience, this time on well-trafficked websites,” Paul Moses writes in the latest issue of Commonweal magazine.  (I’m an occasional contributor there, as well.)

Moses is the author of an excellent book about the tense relationship between New York’s Irish and Italian communities.  Now, he’s given us a stark look at a downright incendiary moment in melting pot history.

“Coughlin introduced Fahey's writings to his vast American audience as he tried to explain away his own rationalizations for the Nazi Kristallnacht pogrom against German Jews” in November 1938, Moses writes, adding, “After an uproar led the New York radio station WMCA to insist on reviewing his scripts before broadcast, Coughlin announced the following Sunday that ‘since I am forced to defend myself, not for myself, but for the cause I uphold, let me introduce into court as my witness the scholarly Professor Denis Fahey.’ Coughlin declared that the Dublin priest had provided the detailed ‘proof’ for his claims about Jews and communism.”

And if that’s not enough, Fahey’s anti-Semitic writings “have been published in recent years by a company…in Richmond, New Hampshire, a traditionalist group that church authorities have determined should no longer be considered Catholic.”

Which is of little comfort.  More and more these days, we seem to be united by exactly one thing – hate.  Okay, and maybe some rage and fury, too.

If nothing else, fathers Coughlin and Fahey – and Kanye West, and Mexican-American “white supremacist” Nick Fuentes – remind us that we should always be very careful when we see the Irish, or immigrants in general, or anyone else, as lovable underdogs.

It’s why I endlessly cringe whenever I talk to anyone about immigration.

There’s one side that says immigrants are ruining America.  Which is dumb and stupid.

But does that mean that what’s going on right now at the U.S.-Mexico border is, like, good?

And that everyone who strolls into the U.S. is going to be some kind of saint?

And don’t get me started about yesterday’s immigrants.

Folks like Father Coughlin are rightfully condemned. Along with his thousands of Irish Catholic followers.

And did Mussolini have lots of Italian American followers?  You bet.  And was there a pro-Hitler German American Bund in many big cities?  Yup.

Lots of these folks, as the years went on, became cops and teachers and lawyers.

It does beg an uncomfortable question.

Maybe we should have built a wall a long time ago.

Or maybe there’s no wall high enough for dumb and stupid.