What Mr. Brokenshire conveniently ignores as he attempts to convince Americans that the issue of Brexit can be dispelled with GPS and license plate readers is that Brexit has its origins in a British primal scream against E.U. immigration policy. 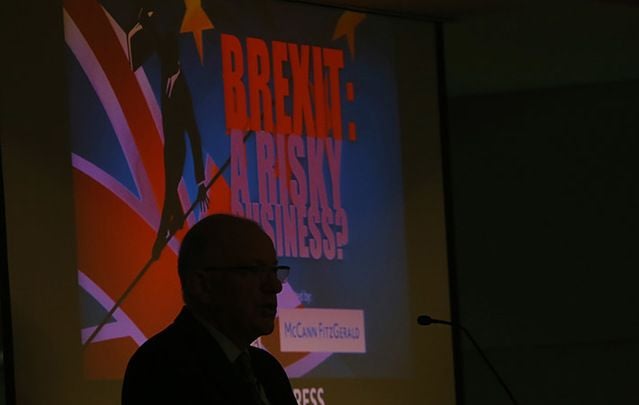 The Pulitzer Prize winning Nobel Laureate Saul Bellow once observed that "A great deal of intelligence can be invested in ignorance when the need for illusion is deep." Vindication of Bellow's observation can be found in Northern Ireland Secretary James Brokenshire's recent interview with IrishCentral and his denial that Brexit will entail a hard border in Ireland. Yet, despite Mr. Brokenshire's best efforts his illusion dissipates with the first critical examination.

Mr. Brokenshire bowdlerizes the Brexit impact to Ireland as "largely about the movement of goods and what customs arrangements are put into place....there are ways in which technology might be able to play a part in respect of consignments, movements of goods, etc.". However, what Mr. Brokenshire conveniently ignores as he attempts to convince Americans that the issue of Brexit can be dispelled with GPS and license plate readers is that Brexit has its origins in a British primal scream against E.U. immigration policy.

While Mr. Brokenshire was reciting the now standard litany of Brexit border oxymoronic clichés to a U.S. audience ("a frictionless seamless border", "a seamless invisible border", etc.) his government's Immigration Minister Brandon Lewis was adamantly stating that the freedom of movement between the UK and Europe will end when the country leaves the European Union in March 2019. Minister Lewis’ statement "we're very clear that free movement ends. It's part of the four key principles of the European Union. When we leave, it ends" is indeed crystal clear, except apparently to Mr. Brokenshire who is investing heavily in ignorance.  Ending EU free movement in the UK has to correlate to enforcement at the UK’s only land border with the EU: Ireland.  Why then does the Northern Ireland Secretary then denigrate the real concerns of a post-Brexit Irish border as "largely about the movement of goods"?  Is it because that he knows that technology provides no convenient answer to immigration control unless we microchip every visitor arriving in the EU Republic of Ireland?

It was reported in the Irish Echo that after thinking he had effectively hand waved the Brexit Border issue, Secretary Brokenshire then pivoted to gushing on Northern Ireland “being open for business” (while devolved government at Stormont is closed ) and gushed on Northern Ireland being home to the popular series “Game of Thrones”.  I could not help but think there was something very Freudian in Mr. Brokenshire escaping the problems of the kingdom he serves to retreat into the fantasy world of George R.R. Martin's Seven Kingdoms.  It was also highly ironic.  In Game of Thrones, a prominent theme is that the kingdoms have a huge structure known as “The Wall” that runs along a three hundred mile border that is designed to keep the self-described “Free Folk” (AKA Wildlings) out of the kingdom and is patrolled by “the Night’s Watch”.  Unless the British government starts replacing the banal spin of “not wishing to see a hard border” with concrete action, it will be inevitable that Northern Ireland will play host to a real version of “The Wall” running along its 310 mile border patrolled by the Black Watch to block the free movement of people.

The people of the isle of Ireland deserve more than “hopes” and “wishes” concerning the post Brexit border.  Six months after Prime Minster Theresa May revealed her “Plan for Britain”, we are still waiting for a detailed “Plan for Northern Ireland”.  It is time to for the Northern Ireland Secretary to stop investing in ignorance and illusory returns and start investing in the Good Friday Agreement, which is predicated on the free movement of the people of the isle of Ireland, and the priceless dividends of peace.