The children have flown the coop to college, ushering in a new normal. Mike Farragher explains what his life is like in his newly quiet house. 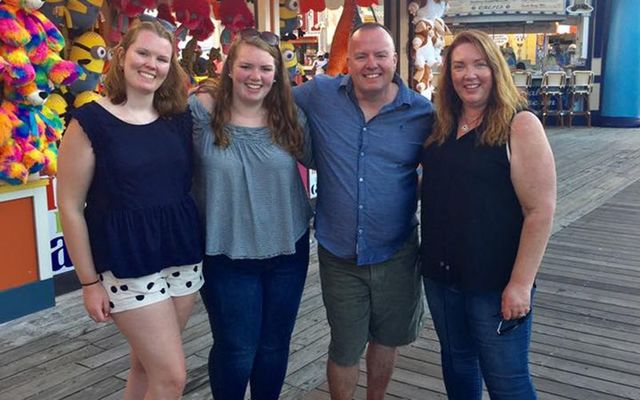 The children have flown the coop to college, ushering in a new normal for Mike Farragher and his wife.  Here, the Irish Voice music writer explains what his life is like in his newly quiet house.

I looked at the receipt again. This is impossible! These figures can’t be right!

I remember when I first got the Costco membership in 2000 because they were the hands-down cheapest place around for baby formula and diapers. Over the years, I’ve built my own wing in this place as I fed my family of four, never getting out of there for less than $400 and a cart stuffed with value priced cartons of grapes and pillowcase-sized bags of potato chips.

The lower Costco bill is just one of the many downshifts I’ve had to get used to in my new reality as my youngest daughter flew the coop for college in September, leaving my wife and me alone in this empty nest.

Mike Farragher and his wife and daughter, saying goodbye at college.

“I bet the house is quiet now” is the comment I get the most and yes, it is. For years, I prayed for a peaceful space in which to write and now that I have it, I miss the noise.

Yes, there has been a flood of productivity since the summer. I wrote a book in record time, a play, nine pages of a movie script, and I am halfway done recording an audio book. Yet the silence is at times so deafening that it’s hard to concentrate.

Irish guilt has also taken on a new flavor in this life phase. While I’m up here writing this, my wife is downstairs, un-stimulated save for the iPad that never seems to leave her lap nowadays.

For years I could go unnoticed when I snuck upstairs to get creative because there was always someone who needed my wife’s help picking out an outfit or a ride to dance practice. Without those distractions, my presence is missed and I now feel bad about removing myself from her side.

One thing we are never apart for: we are finished with dinner and are on the couch like clockwork at 6:30 for Lester Holt and the "NBC Nightly News." As if the news of the day wasn’t depressing enough, the realization that the commercials for blue pills and AARP are now targeting us make us downright despondent!

All of the clichés are true; your day lifts when the kids call or FaceTime you. You tend to keep the doors closed to their rooms because it’s sometimes too painful to view all of the personal artifacts that conjure up one memory of another – the canvas that won first place at the high school art show in Maura’s room, or the Billy Joel and Paul McCartney concert posters on Annie’s walls commemorating the shows you saw together. There’s a dull, sludgy ache at the bottom tip of your heart that seems to be the new normal now.

All the Farragher clan together at home.

Technology definitely makes things a little less lonesome and worrisome. “I could care less if you don’t like it – as long as I’m paying the bills, you’ll both keep the Find My Friends feature turned on at all times on your phone so I know where you are,” I replied in an assertive tone reminiscent of my mother when the girls accused me of spying on them with technology. Damn straight I am!

Speaking of my mother, Michael Chabon once wrote that “every woman has the heart of a policeman,” and we all know an Irish mother has that and the interrogator’s skills to match.

I cannot thank God enough for allowing me to grow up in an age where all of this smart technology didn’t exist. My mother had the nose of a bloodhound back then, routinely and effortlessly sniffing out the open contraband smuggled into my room. I shudder to think how she would have used this tracking technology today to amplify her detective skills!

While my youngest hits the gym to ward off the “freshman 15” weight gain, my wife and I have also tried to keep the waistline in check as our dance card fills with dinner dates. The parents in our carpools over the years are now empty-nesters themselves, and it has been interesting to watch how other couples are coping.

One mom reports falling into a depression that lasts for days after her children return to college after a weekend home. The husband turns his head away from her and toward me, rolling his eyes as she prattles on about her misery. There are some other couples in our purview struggling to find common ground now that they don’t have the kids they have in common anymore.

I look back on the life my wife and I created and I am grateful that we pursued interests both together and separately over the years in such a way that has allowed us to grow up with one another instead of a marriage that’s about “keeping it together for the sake of the kids” as some of our acquaintances seemed to have done.

I also look back in gratitude at the sacrifices my Irish parents made over the years. The continuous loop of overtime shifts on the New Jersey Turnpike and the aprons full of grubby dollar diner tips that made it possible for a dimwitted son (or “the learned eejit” as I am now called) to bypass the college loan slaughterhouse and get a head start saving for the onslaught of college bills that are now coming through the door.

I had the pleasure of strolling around my daughter’s college campus with them a few weeks ago, and we all walked in silent celebration over the fact that an immigrant’s dream of a college education, uncertain and improbable in my youth, is the new normal of our family today.

My youngest made her way home not long ago and I was sent to Costco for yogurts and water bottles for her tiny dorm fridge. I passed two skids of adult diaper boxes; one was the Depends brand and the other was the Kirkland generic.

“I’m putting you through college so I never sit in a Kirkland adult diaper,” I texted.

“Only the best for you, Dad!” came the reply, punctuated by a smiley face.

Will she follow through when I’m older? That “depends!”

* Mike Farragher’s collection of humorous essays can be found at www.thisisyourbrainonshamrocks.com.

Read more: How my orphaned Irish father rediscovered his family