Sinn Fein internal elections will be real battles from now on

Future leaders of the political party may find that the republican party politics that shaped the party are no longer a good fit. 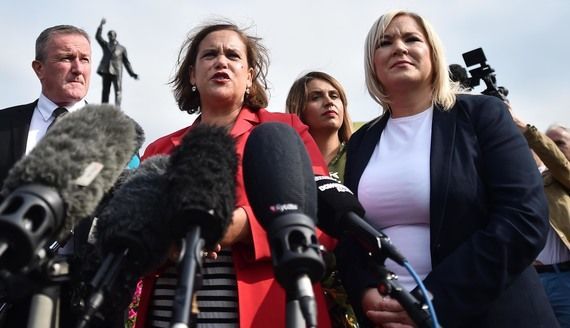 Future leaders of the political party may find that the republican party politics that shaped the party are no longer a good fit.

Strict, military-like discipline has characterized Sinn Fein since the modern version of the party first emerged in 1970. Ever controversial to the outside world, the culture of fear, silence, and blind obedience it bred stifled genuine political debate and ensured the maintenance of a rigid top-down hierarchy. More positively, it also helped ensure the success of the peace process and propelled the party to the forefront of Irish politics after 1998.

On the back of a remarkable (and rapid) post-conflict transformation, it appears now that Sinn Fein is beginning to open itself to the way other parties choose leaders and institute policy: open debate and free elections.

MLA and former Minister for Education John O’Dowd recently announced his intention to challenge party Vice President and Leader of Northern Ireland Michelle O’Neill for her position as Vice President at the party’s next Ard Fheis in November.

It is a significant break from tradition. Senior-level leaders are not normally elected in the usual sense in Sinn Fein. Rather, they are selected by a small cadre of party mandarins who then send them before delegates to seek approval in an "election." But these elections are not contests, and they more closely resemble coronations than they do real displays of democracy.

The upcoming campaign for Vice President will be the first genuine contest for a senior leadership position since Gerry Adams first won the presidency in 1983.

O’Dowd has not yet specified which issues he plans to run on, so it is difficult to predict how the campaign will unfold. Still, it could have long-term implications for the party because he is not just challenging O’Neill or even setting the stage for a future challenger to target President Mary Lou McDonald. O’Dowd is taking aim at the Old Guard that has held this party in its grip since the early 1980s.

Led by Gerry Adams and Martin McGuinness, the Old Guard first assumed power in the late 1970s and immediately embarked on a massive structural overhaul of the IRA that some experts contend saved it from imminent defeat at the hands of the British security forces.

The reorganization of the IRA consolidated the new leadership's hold on the movement, freeing it to focus on elections and engineer Sinn Fein’s gradual transition into parliamentary politics in the 1980s.

Once secure at the nexus of the gun and the ballot box, it abandoned paramilitarism completely and effected the republican movement’s reconciliation with the Northern Irish state. What followed was Sinn Fein’s transformation into a modern, broad-based progressive party that earned it respect and admiration in sections of Ireland once considered unreachable.

When they finally chose to leave the stage, McGuinness and Adams were replaced by O’Neill and McDonald, respectively. Although the ascendance of younger women with no known paramilitary links was heralded as a sign of the political maturity of Sinn Fein, observers always suspected that they would ultimately answer to the Old Guard—especially on matters of principle.

This was borne out in July 2018 when, after McDonald suggested that pursuing a referendum on Irish unity in the midst of Brexit would be irresponsible, she backtracked, stating a few days later that a unity referendum remained Sinn Fein's primary political objective.

Pundits interpreted this episode as an egregious display of the Old Guard's unrelenting influence on party policy, as well as its reluctance to allow the new leadership to stray too far from traditional republican doctrine and forge a more pragmatic path forward for Sinn Fein.

But O’Dowd’s leadership bid signifies to the grassroots that the Old Guard’s word is no longer gospel in the republican movement and that they are free to challenge their leaders if they feel their performance is inadequate.

Even if he loses, the campaign and the election itself will establish a new precedent within Sinn Fein that will inspire the next generation of activists and leaders to make genuine leadership contests a regular feature of party activity.

Perhaps most importantly, the inevitable, future transition to a group of leaders chosen through direct election could radically alter the party’s direction. That future leadership would trace its source of power not to Gerry Adams or his allies, but to the wider republican base. This electorate—steeped in the language of 21st-century progressive politics and a generation (or more) removed from the violence that birthed Provisional Sinn Fein—may find that the doctrinaire republican politics that once shaped the party’s agenda are no longer fit for the present day.

Read more: Elderly blind man from Northern Ireland thrown off flight after accused of being drunk