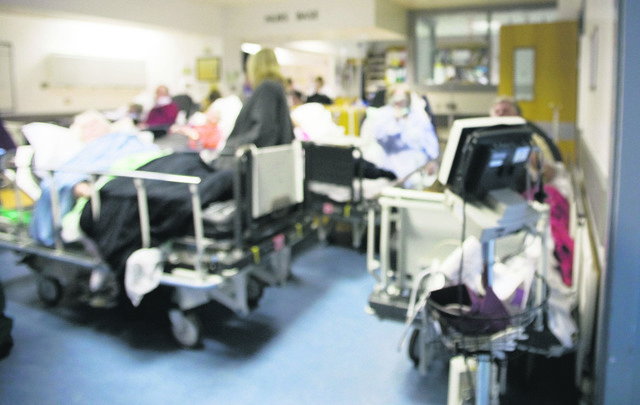 When it comes to broken political promises, there have not been many to rival the 2007 pledge by the Fine Gael party that they would tackle the scandal of patients lying on trolleys in Irish public hospitals.

Fine Gael have been in power for seven of the intervening 11 years and, if anything, the system is far more broken that it was back then.

If you want to find out how broken Ireland’s public health care system is, all you have to do is join a family member on a harrowing visit to any Emergency Department in any of our main cities.

It is hard to know exactly when the unacceptable became the norm, but after witnessing what a 93-year old family member had to endure at first hand last week I am already in dread over what’s in store for our elderly and most vulnerable when the harsh winter conditions kick in.

It was truly dispiriting to see an elderly man who worked hard for 45 years being left to lie for 48 hours in a brightly lit corridor with not a hope of privacy or confidentiality.

This is high summer, and the Galway Races were in full swing last week, but it felt like a war zone to see the despair etched on the faces of the elderly and the injured as they were hauled in only to have to wait hour upon hour to be examined.

For me, the despair really hit home at around 3am. I had been by my relative’s side as he lay on a trolley since about 9pm, after a fall in his living room had led to him being rushed to University Hospital Galway (UHG) in an ambulance.

The emergency crew who arrived at the scene were superb. They transferred him to the hospital within minutes where, presumably, somebody must have decided that there was no immediate threat to his life.

Presumably… because it took 14 hours of lying in that lit up and very public corridor before he was thoroughly examined by a doctor.

It felt so important to have a family member by his side, to provide him with an occasional glass of water, to look out for him, or just to ask what the heck was going on in that overcrowded corridor.

All around me, other relatives were going through the same ordeal. We shared each other’s agonies and frustrations. I was left for three hours without a chair as I paced up and down, feeling like a burden on the nurses who seemed unable to cope with so many patients.

I counted 18 trolleys occupied by patients in the corridor at any one time. Those who made it into a cubicle, with the relative privacy of a curtain, were left to count their blessings as we watched the clock drift slowly into the early hours.

What is it about the Irish that makes us so compliant, so unwilling to complain? We can be great at sharing our troubles and showing solidarity with each other, but so bad at standing up for our rights when it’s clear that things are wrong.

It took me until 2.50am to pluck up the courage to ask a nurse what was happening. I had already decided to call in sick for work, but I wanted to know if he would be seen by a doctor at all tonight.

After all, I was lucky; my home was only ten minutes away.

Others, who had traveled in from a wide hinterland, were not so lucky. A person who lives two or three hours away from a public hospital is hardly likely to leave a relative lying in a corridor in the dead of night, but I figured I might be able to sneak away for a few hours.

In recent years, Emergency Departments have been shut down in smaller hospitals in provincial towns such as Ennis and Roscommon. The result is that already overburdened EDs in major cities such as Cork, Limerick and Galway do not seem to be able to cope with the strain.

Resources are limited, beds are not available, more people are traveling further for emergency care, and now it’s just “normal” to leave them lying on trolleys for two or even three days at a time.

The number of nurses working in Irish hospitals has declined by 2,500 since 2007, with many now to be found working in the UK, Australia, or Canada, after being trained to a high level of expertise here in Ireland.

Sorry, the nurse told me, she did not have a clue.

Perhaps he would be seen by a doctor before dawn, but perhaps not. There were nine people ahead of him in the queue and it wasn’t looking good.  So, she took my phone number and I decided to head for home. Three hours in a bed, a little sleep, and a shower, and I would have more energy for the coming day.

I returned at 7am to find him lying on a trolley just a few meters up the corridor from where I’d left him. Still no sign of a doctor and he had not slept under the constant bright light, but at least he was in a hospital and relatively comfortable after the shock of the fall.

He had no privacy in the middle of the corridor and it felt like some kind of a little victory when he was finally wheeled into a cubicle just after 8am.

Fourteen hours after his admission, he finally got to see a doctor. She was courteous, professional, and treated him with dignity and respect. It would be another five hours before he saw another doctor and someone came by to check up on the medicines he had been taking at home.

The second doctor was very helpful, organizing X-rays and a scan to verify there had been no lasting damage from the fall.

Little did I expect, however, that my elderly relative would go on to spend 48 hours in that ED, sharing a confined, bright space with young revelers and people with mental health issues in an atmosphere of constant light and noise.

Relatives of other patients helped me kill the time by swapping stories or sharing newspapers, but it was hard to believe that elderly Irish patients had to endure such hardship at such a vulnerable time in their lives.

Out of frustration, I sent out a tweet outlining how tiring and frustrating it was to have to spend 48 hours in the ED. There was distress and anguish etched on faces all around me and I was soon inundated with replies.

Doctors expressed their frustration that the system seems to be so broken all across the country and one woman told me that her elderly father died on a trolley in a corridor in ED, 36 hours after being admitted to her local hospital.

“If you treated an animal in the way the HSE (Health Service Executive) is treating patients you’d be up in court and rightly so,” she tweeted in frustration, four months on from her father’s death in a public hospital.

Others reminded me of a famous slogan from Enda Kenny, then leader of Fine Gael, ahead of the 2007 General Election.

Enda Kenny, then leader of Fine Gael, featured on a 2007 General Election poster which read, “I’ll end the scandal of patients on trolleys."

“I’ll end the scandal of patients on trolleys,” said the Fine Gael election poster which appeared on billboards and newspaper pages all over Ireland.

The irony is not lost on people that the Fine Gael party have now been in power, with the support of smaller parties or independents, since 2011 and the waiting times in the Emergency Departments of Irish hospitals seem to be longer than ever.

The Irish Nurses and Midwives Organisation (INMO) began collecting “trolleywatch” figures 12 years ago and they make for grim reading. They send people around our public hospitals early each morning to monitor the number of patients lying on trolleys.

Last week they revealed that there were more than 600 patients on trolleys at Cork University Hospital in the month of July, leading to huge concerns over what patients might have to face over the coming winter months.

There were more than 7,000 people on trolleys in public hospitals across Ireland last month, the most overcrowded July since records began and an increase of 11% on the corresponding figure for the same month last year.

The INMO have expressed concerns over the impact overcrowding may have on the safety of nurses and midwives as they carry out their work.

“Overcrowding is now a constant feature of our hospital system, even in summer,” said INMO General Secretary Phil Ni  Sheaghdha. “Low salaries for nurses and midwives mean that vacancies simply aren’t being taken up and health service capacity can’t grow.

“The hazardous working conditions for staff look set to worsen. The HSE is sleepwalking into yet another winter crisis.”

According to the INMO, there are at least 216 nurses needed in Emergency Departments across Ireland. The Irish economy might be booming again, but last week it felt as though Ireland had little regard for its most vulnerable citizens.

This is no country to get sick in right now.

* Ciaran Tierney is a journalist, blogger, and digital storyteller, based in Galway, Ireland. Find him on Facebook here.