IrishCentral contributor CJ Clancy takes a look at the life of Roy Sullivan, the Irish-American man who was struck by lightning a World Record seven times. 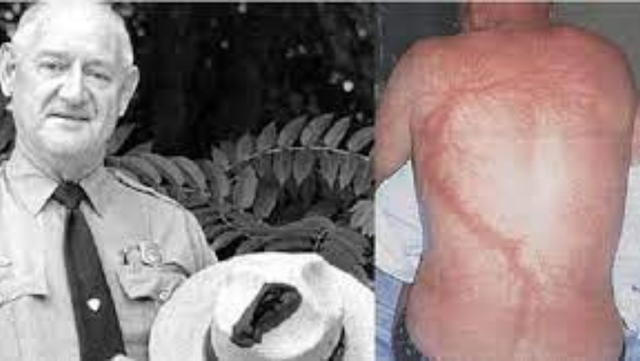 Roy Sullivan was born in Greene county, Virginia on February 7, 1912. He grew up in the blue ridge mountains and was one of eleven children. Roy, began working as a park ranger at Shenandoah national park in 1936.

In April 1942, Sullivan took shelter in a newly constructed fire lookout tower. At the time of the incident, the tower had no Lighting rod and the building was struck eight times. Inside the tower, fire was jumping all over the place. Sullivan fled the building and was struck within a few feet of scampering out the door. The lighting burned a half inch strip across his leg, hit his toe, and burned a hole in his shoe.

In July 1969, Sullivan was driving his truck on a mountainous road when a nearby tree was struck by lightning and deflected into the open window of his truck, striking Sullivan. The strike burned off his eyebrows, eyelashes and set his hair on fire. He was also left unconscious, with the truck rolling precariously to a halt near the edge of a nearby cliff. Normally the metal body of a vehicle offers protection by acting as a Faraday cage.

In July 1970, Sullivan was out in his front yard, when lighting struck a nearby transformer. It jumped from the transformer, striking Sullivans left shoulder, searing it like lump of steak.

In the spring of 1972, Sullivan was at work inside the station at Shenandoah national park, when lighting struck again, setting his hair on fire. Sullivan dashed for the restroom to put the flames out, but his head wouldn't fit under the tap, and had to use a wet towel instead.

On August 7, 1973, Sullivan was patroling the park, when he spotted a storm cloud. He drove away in the opposite direction like a bat out of hell. When he was satisfied that he was at a safe distance, he hopped outside the truck and was struck a bolt of lightning. The lighting moved down his left arm and left leg, knocking off his shoe. It crossed over to his right leg just beneath the knee. Sullivan crawled back into his truck to retrieve a can of water to douse over his hair which was on fire.

On June 5, 1976, Sullivan was strolling along outside, when he tripped, injuring his ankle. He noticed storm clouds, rose to his feet, and attempted to flee the area. He was struck again resulting in his hair catching fire.

On June 25, 1977, Sullivan was fishing from a local pond one morning, when he was struck a seventh time. The lighting hit the top of his head setting his hair on fire. The lighting traveled down, burning his chestand& stomach. Sullivan fled to the sanctuary of his car. When he reached the car, a hungry bear appeared, strolled over to his fishing line to steal his trout. Sullivan had to jump out of his car to scare the bear away, with his singed hair, still smouldering on his head.

All seven lighting strikes were documented by Shenandoah national park, superintendent R Taylor Hoskins. Sullivan also claimed he was struck by lightning as a child while helping his father cut wheat. The lighting struck the scythe without causing injury. Nobody else was present when it occurred, so it couldn't be verified.

Despite a Guinness world record and minor fame, Sullivan suffered socially as a result of the lighting strikes. People were petrified of being anywhere near him out of fear of being struck themselves. At one stage, his wife was out hanging clothes in their backyard and when Sullivan popped out to give her a hand, she was struck by lightning.