A look at President Nixon's visit to Ireland, 50 years ago this weekend

Irish author and historian John Mulqueen looks at the political landscape that surrounded President Nixon's visit to Ireland in October 1970. 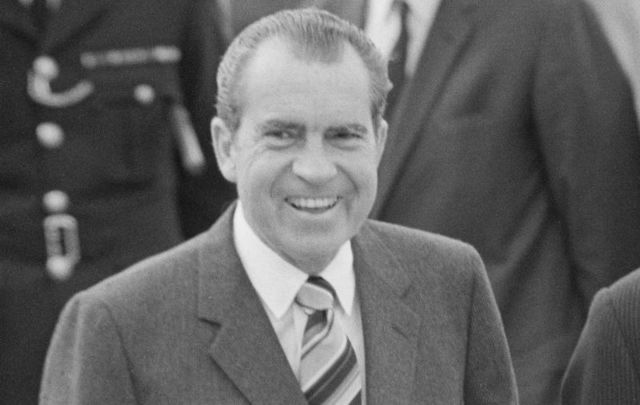 President Nixon visited Ireland on October 3 - 5, 1970. It was a very different Ireland than the one President Kennedy had encountered in 1963.

*Editor's Note: This column was submitted to IrishCentral by John Mulqueen, who authored "'An Alien Ideology' - Cold War Perceptions of the Irish Republican Left." The below looks at President Nixon's visit to Ireland, October 3-5 1970.

Ireland changed dramatically in the years between John F Kennedy’s ‘homecoming’ in 1963 and Richard Nixon’s visit in October 1970. Students protested in the streets, the Northern Troubles unfolded, and the iconic civil rights leader, Bernadette Devlin MP, upset conservative Irish Americans. Kennedy, in the memorable phrase of a US diplomat, had ‘left a country hoarse from cheering’.'

Nixon, too, visited Ireland to draw attention to his Irish roots, but he enjoyed a less than overwhelming welcome, despite the official ‘blarney.'

In Shannon airport, the Taoiseach, Jack Lynch, greeted the president in the language ‘of his forefathers’: ‘Céad míle fáilte’ (hundred thousand welcomes). In his reply, Nixon said he never had the opportunity of driving through the Irish countryside to see where "they say my great-great-great-great-grandparents" came from. He later paid his respects to his ancestors at a Quaker graveyard in Co Kildare, while his wife, Pat (Ryan), visited relatives in Co Mayo.

The Nixons stayed with a wealthy friend for two nights in a Georgian country house, where the president discussed the Vietnam peace negotiations with his chief negotiator at the Paris talks. However, he did not discuss geo-political issues in detail with Lynch during his two-day Irish stop, the final stage of a series of meetings with Cold War allies in Europe.

Nixon’s fears of the global threat posed by the Soviet Union and its allies were fuelled by widespread opposition in the West to America’s war in Vietnam. For its part, the anti-war lobby saw the US as the aggressor in south-east Asia. Demonstrators burned the president’s effigy outside the American embassy in Dublin, a prominent member of the ‘demo fringe’ threw an egg at him, and a young follower of the Chinese dictator, Chairman Mao, blocked his motorcade in Limerick. The effigy burners, (freshly-laid) missile thrower, and Maoists, were hardly representative of Irish public opinion in 1970, but such radicals received disproportionate media attention. And these developments dismayed the American ambassador, John Moore.

Moore had warned the Nixon Administration – keenly interested in left-wing student activity across the globe – that these demonstrators ‘fed on the irritants which have crept into Irish feelings for the US as the old family ties between the two countries weaken’. Moore’s brother worked for Nixon in the White House; fifty years before, his father championed Éamon de Valera, the elderly Irish president, when he toured the US during the Irish War of Independence.

Following the ambush of student civil rights marchers at Burntollet Bridge in January 1969, the embassy informed Washington that the Northern Ireland civil rights issue could radicalise students in the South. The struggle of African Americans in the 1960s inspired the founders of the Civil Rights Association in the North – they adopted the American movement’s anthem ‘We Shall Overcome’ – but marchers were attacked by the police in October 1968 when they dared to enter the centre of Derry.

When these shocking scenes appeared on television screens around the world, and Northern Ireland’s security minister claimed he was confronted with an IRA/communist conspiracy, the US consul in Belfast dismissed these wild claims. Most civil rights marchers in the North were not extremists, Neil McManus told the State Department, and could be satisfied with meaningful reforms. Following the May 1968 events in Paris, the possibility of student unrest had occupied minds in the US embassy.

Since the issues in the South were mundane, such as campus facilities, the embassy predicted that any disturbances would not lead to anything like the violence seen in Paris or Berkeley. Student protests in Dublin were peaceful, as it turned out, and relatively minor. However, events took a more serious turn in the summer of 1970.

In Dublin, in late July, a US Navy sailor was shot in the arm and leg, and staggered down the street ‘leaving a trail of blood’ behind him. An ‘Irish-Indo-Chinese Solidarity Front’ claimed it acted against ‘American murderers of unarmed Vietnamese peasants.' A few days later, unknown assailants slightly wounded a sailor from the same ship, the USS Plymouth Rock, in another shooting incident. These two shootings of  US military personnel – unprecedented in Ireland – made front-page news.

However, earlier in the year, in January, the republican movement (Sinn Féin and its military wing, the IRA) split into Official and Provisional wings. This proved to be a more revolutionary development, against the backdrop of the emerging Troubles, than any action on the part of ‘the demo fringe’. The republicans who walked out of the Sinn Féin ard fheis accused the leadership of trying to turn the organisation into ‘another political party seeking votes at all costs’ under the direction of Moscow-led communists. These republicans vowed to uphold Sinn Féin’s ‘principled’ position on parliamentary abstentionism – refusing to recognise the legitimacy of the ‘partitionist’ parliaments in Leinster House and Stormont – and declared their allegiance to a new IRA ‘Provisional Council’. They accused the IRA’s leadership of starving it of weapons in recent years to a point where it could not defend Belfast Catholics in August 1969. Seán Mac Stíofáin defined the Provisional IRA’s mission: to remove the British presence in the North by ‘force of arms.'

The embassy informed Washington that the republican movement had been the target of a ‘concerted communist take-over effort’ on the part of leading left-wing figures in the leadership. Communists such as Roy Johnston targeted the republican movement, the embassy believed, because a lingering affection for the IRA among the Irish public could be exploited. Moore pointed out here that the embassy was following the Nixon Administration’s policy of monitoring ‘extremist’ activity.

The Official IRA, with Cathal Goulding as its chief of staff, found itself at the centre of the politically disastrous events in Belfast that became known as the ‘Falls Curfew.' The imposition of a curfew in the Lower Falls, in early July 1970, and the ensuing gun battle, proved to be a landmark moment in the Troubles, creating widespread nationalist hostility towards the British army. Four civilians, with no direct involvement in the disturbances, were killed, and the army carried out house-to-house arms searches of the area, employing exceptional brutality in the process.

The Nixon Administration continued Washington’s policy of ‘non-intervention’ in Irish affairs. Until the mid-1980s, the US refused to use its ‘special relationship’ with Britain, its key Cold War ally, to influence London’s approach on Northern Ireland.

But the now-powerful Irish lobby in Washington had leverage with another president with Irish roots, Ronald Reagan, who departed from this longstanding policy. Reagan persuaded the British prime minister, Margaret Thatcher, to give a fair hearing to proposals for a new Anglo-Irish approach to the crisis. This led to a tortuous process resulting in the Belfast Agreement of 1998, thus ending violent conflict in Northern Ireland.

*John Mulqueen is the author of ‘An Alien Ideology’: Cold War Perceptions of the Irish Republican Left (Liverpool University Press, 2019). You can follow him on Twitter @JohnMulqueen12.