Celebrating Austin Currie and the start of the Northern Irish non-violent civil rights movement which all started on June 20 with a sit-in over housing. 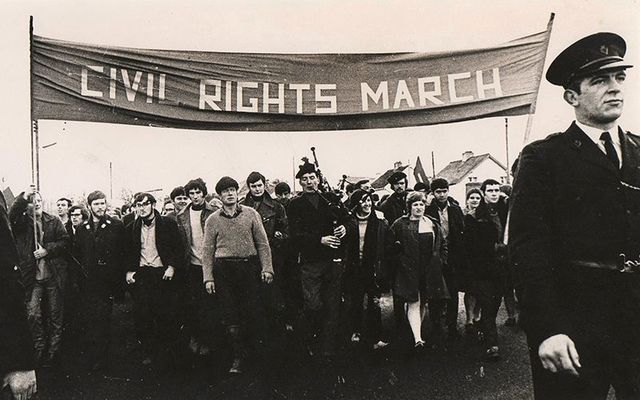 Celebrating Austin Currie and the start of the Northern Irish non-violent civil rights movement which all started on June 20 with a sit-in over housing.

This year is the 50th anniversary of the non-violent civil rights movement in Northern Ireland. Its start was sparked by the Dungannon Rural Council’s management of public housing in Caledon, Co. Tyrone. On June 20, 1968, Austin Currie, the East Tyrone Nationalist Member of Parliament (MP) at Stormont, “squatted” in a house, the Council awarded to a single, childless 19-year-old employed by a Unionist politician. She was Protestant.  Days earlier, a Catholic family of five was evicted from the house next door, and it was awarded to a Protestant and his only child. As Currie put it, after the Council’s decisions, “all hell broke loose.”

Realizing justice would not be achieved through ordinary channels, Currie opted for civil disobedience. With the support of the Nationalist Party, he staged a sit-in at the house awarded to the 19-year-old.

Currie and two local men smashed a back window to enter and barricaded themselves inside. They remained for a few hours before the Royal Ulster Constabulary (RUC) forcibly removed them. Their protest was viewed as a success because it was reported on BBC News London. It was the first time a major media outlet covered housing discrimination in Northern Ireland.

Currie was prosecuted, and the trial judge dismissed the case. But the dismissal was reversed by the High Court on appeal. Currie’s second prosecution resulted in a conviction and a five pound fine.

This was followed by the formation of the non-sectarian Northern Ireland Civil Rights Association (NICRA) in 1967. NICRA urged Stormont to enact laws to prohibit discrimination in public employment and housing, redraw electoral districts to reflect the number rather than the identity of voters (i.e., end gerrymandered districts), and institute a “one man-one vote” system. NICRA also called for the Special Powers Act to be repealed and the Ulster Special Constabulary (B Specials) to be disbanded.

NICRA’s demands focused on modest constitutional reforms, rejecting provocative objectives such as independence or a united Ireland. Michael Farrell, a member of the NICRA Executive and an activist in the Peoples Democracy group of university students, described NICRA’s goals as simply seeking “a fair deal within Northern Ireland.”

Unsurprisingly, NICRA modeled itself on the U.S. civil rights movement headed by Dr. Martin Luther King, Jr. Since the Reconstruction era, government power, and authority in the U.S. South was controlled through enforcement of punitive Jim Crow laws. Since Northern Ireland was created by partition in 1922, power and authority was controlled by administering the government as “a Protestant state for a Protestant people.”

Both civil rights movements were aimed at achieving full equality of citizenship for those denied it. In his famous “Letter from a Birmingham Jail,” Dr. King explained the justification for civil disobedience. He wrote: “I submit that an individual who breaks a law that conscience tells him is unjust, and who willingly accepts the penalty of imprisonment in order to rouse the conscience of the community over its injustices, is, in reality, expressing the very highest respect for the law.” His strategy of bringing about social change through acts of civil disobedience and non-violent protest inspired NICRA members, who sang the U.S. civil rights anthem - “We Shall Overcome” - while marching.

After the sit-in, Currie urged another demonstration of protest against the Council’s housing decisions. NICRA responded by organizing the first Northern Ireland civil rights march two months later. The march from the Co. Tyrone towns of Coalisland to Dungannon was incident free. That was not the case during the marches that followed.

In October, the government banned a march protesting discriminatory allocation of public housing in Derry. When marchers defied the order, baton-wielding members of the RUC viciously attacked and beat them to the ground. Over the next ten months, government violence and oppression scarred every march.

The Cameron Commission, the first of many commissions established by the government during the Troubles, was set-up to report on the “immediate causes and nature of the violence and civil disturbances in Northern Ireland on and since 5th October 1968.” The Commission’s 1969 report, in general, vindicated marchers and criticized the police.

Although the exact starting date of the Troubles is debatable, some consider it to be the civil rights movement era. What is not debated is that Northern Ireland had profoundly changed by the end of this era. The British Army was patrolling Northern Ireland’s streets, and the IRA had re-emerged as defender of the minority community. The massive support for a non-violent civil rights movement eroded. Support was replaced with a hopeless feeling “that the Northern State was unreformable.”  And, seeds of enmity were planted that yielded three decades of conflict and 3665 deaths.

Because the government treated the modest demands for constitutional reform by peaceful protesters as an existential threat to its survival, Northern Ireland’s civil rights movement was extinguished. It was killed by government violence and oppression, accompanied by corrupt indifference. How tragic!

Read more: Leading unionist says a united Ireland must be planned for in the future