Why is rape a largely unpunished crime in Ireland? Here’s the answer

Only 15% of rapes are reported and then the full burden of evidence and heavy cost of mental health falls on the rape survivors who are, often, publicly shamed. 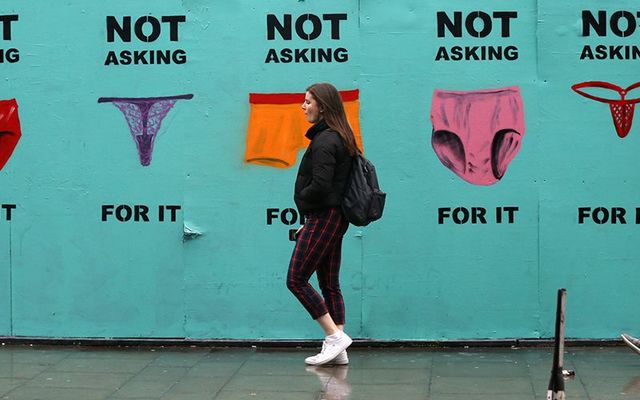 A mural in Dublin by graphic designer Emma Blake, also known as Estr, inspired by the Cork rape trial in which the victim's throng was used as evidence. RollingNews

Only 15% of rapes are reported and then the full burden of evidence and heavy cost of mental health falls on the rape survivors who are, often, publicly shamed.

When Lindsay Armstrong was 16, she was raped by a 14-year-old boy. At her trial, she was brutally cross-examined.

She was asked to hold her underwear up for the courthouse. “Would it be fair to describe those pants as flimsy?” asked the defense lawyer. “I don’t think what kind of pants I wear has anything to do with…”

The defense lawyer cut her off. “Hold them up again. What’s it called? A thong?” Lindsay reluctantly held up her underwear once more. “What does it say on the front?” he asked.

Lindsay went silent. She was a teenage girl, being forced to hold up her underwear for the court, asked if she would describe them as see-through and flimsy, now being asked to give even more detail. “Little devil.”

The boy was found guilty. Three weeks later, Lindsay locked herself in her room, put ‘Bohemian Rhapsody’ by Queen on, and killed herself. When it comes to a rape case trial, even when the female complainant wins, she loses.

Lindsay was publicly shamed in the courtroom, and the shame was too much. She took her own life in the summer of 2002.

Unfortunately, it came to light last week that a very similar event took place in the Irish courts in Cork. Whilst defending a 27-year-old man accused of raping a 17-year-old girl, the accused’s senior counsel urged the court “to look at the way she was dressed; she was wearing a thong with a lace front.”

Lindsay’s parents had previously spoken of their fear that the same fate could befall a young rape victim in the future and were “appalled” to hear that something so similar had happened in Ireland.

Her father remarked how the defense lawyer “basically called [Lindsay] a tart who deserved to be raped, that's how she felt at the end of the day."

Her mother said that is was “the embarrassment and humiliation of standing in the court and being forced to hold up her underwear that she was wearing at the time” that led Lindsay to commit suicide.

Upon hearing of this incident in Cork, Ruth Coppinger brandished a pair of underwear in the Dáil. "It might seem embarrassing to show a pair of thongs here… how do you think a rape victim feels at the incongruous setting of her underwear being shown in a court?" (see her full speech below)

In the case of the 27-year-old man accused of raping a 17-year-old in Cork, he was cleared of all charges. The threshold for proving guilt ‘beyond reasonable doubt’ is incredibly high, and the burden of evidence is on the victim. Sometimes there is not enough physical evidence, which means that many rapists will walk free; the conviction rates for rape are pitifully low.

Indeed, conviction rates for rape are far lower than for any other crime; only 5.7% of reported rapes in the UK last year resulted in a conviction.

Other times, there will be physical evidence, such as the bruising and internal bleeding on the complainant, and that will still not be enough.

Because of this burden of proof, many women will not even report a rape in the first case. When they do report it, often it will not make it to court. When the allegation does make it to court, very rarely does it result in a conviction, yet all too often it results in public humiliation for the claimant.

Only around 15% of rapes are ever reported; silence pervades. The actions of these defense lawyers make the incredibly tough decision to report sexual assault even more difficult. It’s time we outlaw this voyeuristic exhibition in the courts and acknowledge that a certain style of underwear doesn’t equal consent.

Read more: “You did not win” - Irish rape survivor speaks out