Penn Rhodeen's "Peacerunner: The True Story of How an Ex-Congressman Helped End the Centuries of War in Ireland" is a must-read for the incoming Irish American US President. 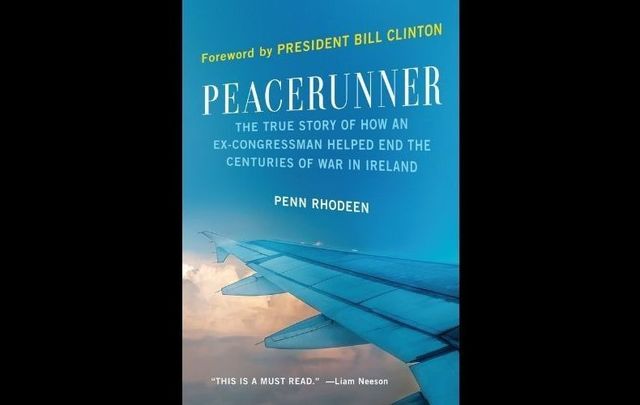 In late December, just a month before his upcoming inauguration, the New York Times asked 22 distinguished writers what books Joe Biden should read.

The recommended books were certainly worthwhile, but there was a striking absence in the list directed to our new, proudly Irish-American, president: Not one of the books had anything to do with Ireland.

Naturally, IrishCentral stands ready to rectify that omission by suggesting that the 23rd book for Joe’s nightstand should be "Peacerunner: The True Story of How an Ex-Congressman Helped End the Centuries of War in Ireland."

The author, also the writer of this article, isn’t close to the pantheon of writers the Times consulted, but there are good reasons why Peacerunner is the right book for Joe Biden now. Ten good reasons follow.

It’s an important and uplifting story of an Irish, Northern-Irish, British and American accomplishment of world-historical significance.  By the 1960s, the history of warfare between the British and the Irish, which started in 1169, had become distilled to a bloody conflict in Northern Ireland called The Troubles. Horrific bombings and shootings became a staple of news, pictures and video throughout Europe and North America. Many tried to end it, but nothing worked. Peacerunner shows how peace was finally reached.

It’s about what politics well practiced can accomplish when nothing else can.  War often comes from failed politics.  Politicians start them and it’s other politicians who have the skill, connections and know-how to end them.

It’s about American foreign policy at its best.  In Northern Ireland, the Americans sought the views of all sides and listened with care and respect. They didn’t tell them what they should do but promised to help them reach the right agreement for Northern Ireland and to support their agreement. Those promises were kept.

4: A story of bravery

It’s a story of how a skillful, brave and determined politician, operating without currently holding office and without any official assignment - but with a lot of help from his friends - can help change the world. Bruce Morrison,  the ex-Congressman of the book’s subtitle,  got involved in working for peace in Northern Ireland when he was able to pick himself up after suffering a brutal, career-destroying political defeat.  He learned what to do and who could help. He was willing to go anywhere and speak with anyone, even if they were on terrorist watch lists. He and an amazing array of Irish-American, Northern Irish, Irish and British activists and politicians, ambassadors, foreign policy experts, journalists and others never gave up and found the way to peace.

It’s about the importance of leaders’ willingness to approach terrible old problems in new ways.  When Bill Clinton was offered a fresh perspective on how the United States could help end the violence in Northern Ireland - a perspective that many in the Irish-American political establishment, not to mention our longstanding ally Great Britain, vehemently opposed - he considered it with an open mind, ultimately embraced it and made it his own.

The preface was written by Bill Clinton Here’s what he wrote in grateful tribute to his law school classmate Bruce Morrison: “Thanks in no small measure to Bruce’s dogged commitment to peace and his willingness to devote years of his life to working with so many others to achieve it, what began as a hope became a central focus of my administration and one of my proudest achievements as president.”

Congressman John Lewis wrote that “Peacerunner is a riveting account of the nonviolent tactics used to bring peace to Northern Ireland…the highest use of political service is an inspiration to us all.”

8: Liam Neeson dubbed it a must-read

Liam Neeson, who was born and raised in Northern Ireland, wrote that the “gripping and wonderful” Peacerunner story is “personal for me.” He called it “a must-read.”

It’s a story of how a land of unending conflict and terrible violence got built back better. It often seems as if readers prefer bad news stories, the more awful the better. But in times when pandemic rages throughout our land and a failed president incites terrorists and barbarians to invade our Capitol building, the cherished symbol of our democracy, there’s a lot to be said for learning how good and brave people, acting with skill, principle and inspiration, brought peace and democratic possibility to a long-troubled land.

It’s a fast-moving, enjoyable to read narrative that clocks in at under 300 pages. A busy president can enjoy it a few pages at a time.