US President-elect Joe Biden called upon President Trump to immediately demand a stop to the violence that has erupted today in the US Capitol in Washington, DC. 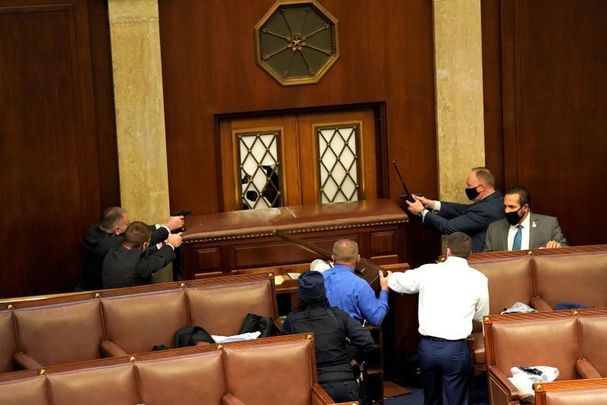 January 6, 2021: Law enforcement officers point their guns at a door that was vandalized in the House Chamber during a joint session of Congress in Washington, DC. Getty Images

President-elect Joe Biden has responded to the riots that erupted at the US Capitol today as Congress attempted to certify the 2020 US presidential election while President Trump, at the nearby 'Save America Rally,' again baselessly claimed that the election was rigged.

Less than ten minutes after Biden's live address, a recorded video was shared on President Trump's Twitter in which Trump again, falsely, claimed the election was stolen.

"This was a fraudulent election, but we can't play into the hands of these people. We have to have peace. So go home, we love you, you're very special."

On the day that Congress was set to certify the results of the 2020 US Presidential election, pro-Trump rioters stormed the US Capitol forcing Washington, DC into an at least 12-hour lockdown from 6 pm EST.

The typically ceremonial process of Congress certifying the US presidential election was marked with unprecedented scenes as pro-Trump rioters, having dispersed from a nearby 'Save America Rally,' breached security and invaded the Capitol building.

Shortly before the Congressional proceedings convened, President Trump, speaking at the rally, again baselessly claimed that the recent presidential election was rigged and vowed not to concede.

After thanking the crowd and describing it as an "honor" to have their support, Trump said: “All of us here today do not want to see our election victory stolen by emboldened radical left Democrats, which is what they’re doing, and stolen by the fake news media, that’s what they’ve done and what they’re doing.

“We will never give up, we will never concede, it doesn’t happen. You don’t concede when there’s theft involved.

“Our country has had enough, we will not take it anymore.”

“This was not a close election,” Trump said, which comes in direct contradiction to what Senator Majority Leader Mitch McConnell said during today’s Congressional proceedings in response to Republican Senator Ted Cruz's objection to the certification of the election results.

McConnell said: “The voters, the courts, and the states have all spoken. They’ve all spoken. If we overrule them, it would damage our republic forever. This election, actually, was not unusually close.”

He added: "Our country has been under siege for a long time."

Pro-Trump rioters storm the US Capitol

Around 1 pm EST, rioters tore down fencing at the Capitol building:

BREAKING: Trump supporters have breached the Capitol building, tearing down 4 layers of security fencing and are attempting to occupy the building — fighting federal police who are overrun

This is the craziest thing I’ve ever seen in my life. Thousands, police can’t stop them pic.twitter.com/VVdTUwV5YN

Jim Newell, a senior politics writer at Slate, shared this video of rioters breaking glass at the Capitol Building:

At 2:44 pm EST, Matt Fuller, a reporter with HuffPost, said on Twitter that shots were being fired into the Chamber:

They’re shooting into the chamber. pic.twitter.com/l9owW7BAVt

At 2:47 pm EST, Igor Bobic, a politics reporter with HuffPost, shared a photo of a protester who had made his way to the dais inside the Chamber and yelled “Trump won that election”

They’re in the chamber. One is up on the dais yelling “Trump won that election!” This is insane pic.twitter.com/p6CXhBDSFT

Bobic followed up with footage of rioters with both Trump flags and US flags scaling the scaffolding outside of the building:

Several people got on to a scaffolding outside Senate, took it to second floor, which looked like the area where McConnell’s office is located, and started banging on windows pic.twitter.com/IIZ21nkzFT

Prior to Biden's live address, President Trump had only offered two tweets in response to the unprecedented scenes that were unfolding:

Please support our Capitol Police and Law Enforcement. They are truly on the side of our Country. Stay peaceful!

I am asking for everyone at the U.S. Capitol to remain peaceful. No violence! Remember, WE are the Party of Law & Order – respect the Law and our great men and women in Blue. Thank you!

The pair of tweets came less than 20 minutes after Trump slammed Vice President Pence for not having “the courage to do what should have been done to protect our Country and our Constitution:”

Mike Pence didn’t have the courage to do what should have been done to protect our Country and our Constitution, giving States a chance to certify a corrected set of facts, not the fraudulent or inaccurate ones which they were asked to previously certify. USA demands the truth!