With Superbowl LIV set to take place this Sunday, we took a look at one San Francisco 49ers player that Irish fans should be cheering for. 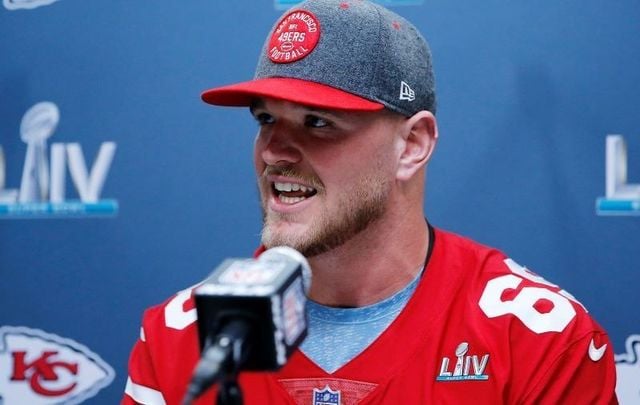 Mike McGlinchey has gone from playing Notre Dame's Fighting Irish to the San Francisco 49ers, who are set to face off with the Kansas City Chief's at this year's Super Bowl.

Everyone knows Notre Dame has a glorious football legacy, and that they are called the Fighting Irish.  But things get a little hazy when you ask people if they can name, you know, an actual Irish American who’s played for the Fighting Irish.

Mike McGlinchey of the San Francisco 49ers once played that role.

McGlinchey grew up in a gigantic extended Irish American clan in Philadelphia, including several relatives named Ryan and Loughery, who also played Division One college and even pro football. They include McGlinchey’s cousin Matt Ryan, the All Pro starting quarterback for the Atlanta Falcons who attended the same Philly high school as Mike.

“We were just an insane football family,” McGlinchey once told the Notre Dame fan website ndinsider.com. “I remember at my grandmother’s wake, we were all playing a tackle football game in our suits outside. I think that’s how she would have wanted it, but that kind of gives you a perspective of who we are.”

McGlinchey is one of six children. And one of about two dozen or so kids who looked up to grandfather Sam Loughery, who left high school to sign up with the Navy just before Pearl Harbor.

When it came time for Mike -- gigantic himself at 6 feet, 8 inches and 300 or so pounds -- to pick a college football program, he went with the Irish of Notre Dame. He seemed to have made a good choice. He was selected in the first round by the San Francisco 49ers. 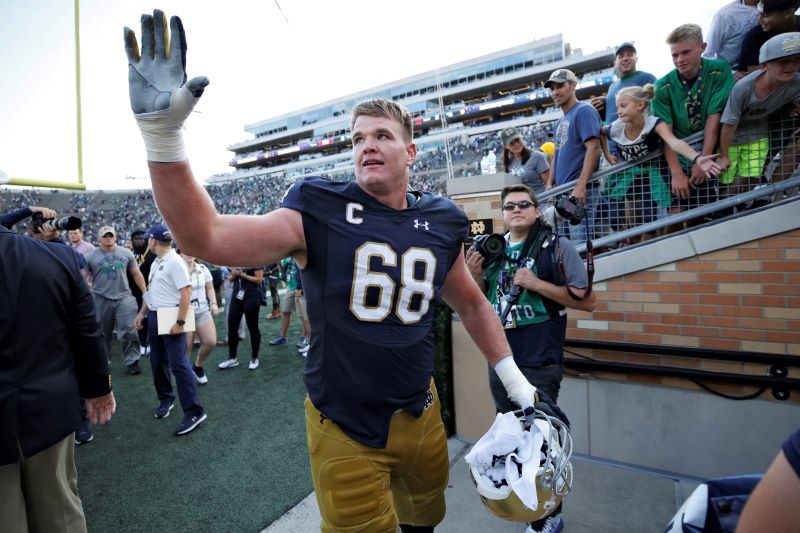 Mike McGlinchey during his Fighting Irish days in 2017. (Getty Images)

That is also turning out to be not only a good choice but also quite an Irish one.
Things didn’t start out great for McGlinchey and the 49ers. In his first year with the club in 2018, the 49ers won only four games against 12 losses. It didn’t help that staring Niners quarterback Jimmy Garoppolo spent much of the year injured.
Boy how things can change in a year.

McGlinchey, an offensive tackle whose job it is to protect the quarterback, is spending this week in Miami, getting ready to take on the Kansas City Chiefs in Super Bowl LIV. It should be a good game, with the Chiefs’ high-powered offense (led by explosive quarterback Patrick Mahomes) going up against the Niners’ tough defense.

The oddsmakers have the Chiefs as one-point favorites (a very good bet, in this humble columnist’s opinion), but if your instinct is to root for the Irish, go for the Niners -- and not just because of McGlinchey.

The 49ers squad is presided over by both a coach and general manager with sturdy Irish roots. General manager John Lynch grew up outside of Chicago, before playing for legendary NFL coach (and fellow Irish American) Bill Walsh at Stanford.

Lynch was also a baseball star in college and even played briefly in the Florida Marlins’ organization. But he went on to play pro football, becoming a nine-time Pro Bowler.

This week’s Super Bowl is a homecoming of sorts for Lynch.  He won Super Bowl XXXVII in 2002 with the Tampa Bay Buccaneers.

Meanwhile, the head coach of the 49ers is another Irish American, Kyle Shanahan, whose NFL pedigree is about as good as it gets. His father was former NFL head coach Mike Shanahan, who won two consecutive Super Bowls in the late 1990s with the Denver Broncos.

Like Lynch, Mike Shanahan grew up outside of Chicago, though when his son Kyle was born, the family was living in Minneapolis where Mike had gotten a coaching job with the University of Minnesota.

On Super Bowl Sunday, Mike and Kyle will be looking to become the first father-son duo to both win NFL titles. Standing in their way, though, is Patrick Mahomes, the supremely talented quarterback who may well inherit the title (finally) surrendered by Irish American New England Patriots’ quarterback Tom Brady as best player in the game.

Which is really the most important thing about this Super Bowl, right? That someone not married to a supermodel is going to win it.

Who are you rooting for during this year's Super Bowl? Let us know in the comments!