“Turn your TV off. Don’t put any money on either of them. When they do fight, we will all lose.” 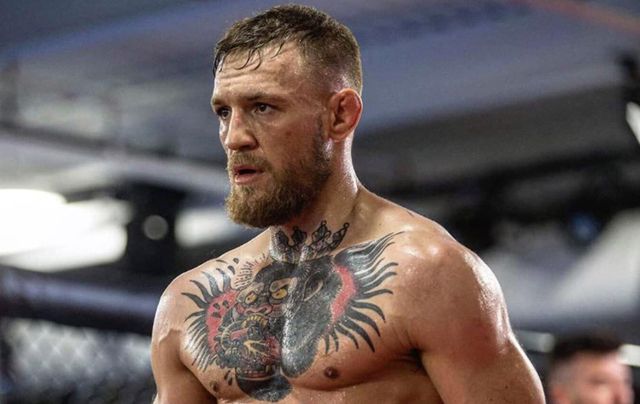 Auditioning for the part of lovable rogue, Conor McGregor has overacted and landed in the briar patch that we reserve for tin-plated folks like Pharma Bro Martin Shkreli instead.

We came to see him box but instead he is taking us to a circus. It’s needless, it’s senseless and it’s utterly indefensible.

You don’t seem to understand American society Conor, so here’s a handy list of real life issues no sane person should ever touch simply to offend an opponent before a boxing match: Racism, Sexuality, and Violence against Women.

During their “world tour,” with press conferences held in four cities, McGregor and Mayweather were both guilty of spouting racist, homophobic and pointless derogatory language, but this weekend a photo appeared online of the Dublin fighter that made reference to Mayweather’s history of domestic violence went too far.

In the photo McGregor is wearing the jersey of Orlando Magic NBA player C.J. Watson, the man who was alleged to have been sleeping with Mayweather's girlfriend in 2010. This alleged relationship sparked the boxer into assaulting the mother of his three children, Josie Harris. Mayweather has a long history of domestic violence. Since 2002 Mayweather has been accused of violence against women with alarming frequency. The photo was removed from McGregor's Instagram account but continues to be shared by the public.

I mention this because it is real life, despite what some tell you, not a $1 billion boxing match.

The pain that comes from the experience of racism is life-altering; there is no one alive who has a reason not to know that now.

But referring to violence against women to score a cheap point against a sporting opponent isn’t just insensitive, it’s repulsive. No one can make excuses for someone who does a thing like that.

Quit while you’re ahead isn’t advice that’s generally given to boxers, but it’s time someone said it to Conor McGregor – and frankly, to Floyd Mayweather too.

Can there be any question that their verbal jousts are backfiring spectacularly, needlessly damaging their reputations, their brand and this please-let’s-get-it-over-with fight?

We get it, both of these brawlers want to give their “biggest fight in history” – which some are already calling fixed – some drama. But there are myriad ways to do that without looking like an utter plum.

Mayweather hasn’t exactly covered himself with glory either, let’s recall. Reaching for Ye Olde Cuss Book of 1740 to call McGregor the F-word was indefensible.

Mayweather hasn't exactly covered himself in glory in the last few weeks either!

You think you’re tough, Floyd? Think you had a hardscrabble upbringing? I wonder if you would have lasted five minutes as only gay boy in any rural village in Ireland or the United States? You want to know what heroism looks like? Try standing up to your entire community when it coldly marks you out for expulsion. Try it when you’re just 14 or 15 years old, when you have no one to take your side, no family to support you and nowhere to go. Then maybe talk to me about what toughness looks like?

Many people see in McGregor a new type of Irishman. One who is unapologetically confrontational, cocky, confident, and full of himself. They like this new kind of swagger and think it’s time that we stopped tugging our forelocks.

They like this new storyline precisely because it’s not Irish. Irish history teaches you about getting devastated, stripped of your land, your language, your livelihood, and even your life.

And then getting back up.

We are not now – and have never been – the people who crow and exult over the defeated. We are not the people who lord it over others because the baying crowd behind us has our backs. So what do you think you’re doing, Conor?

Tugging your forelock and mumbling into your sleeve has lasted as long as it has for us because it’s SMART. The best thing that can happen to us is to be underestimated. All those Paddy the Irishman jokes about the dumb Irish that you heard growing up weren’t an expression of contempt, they were an expression of fear. What if they’re not who we say they are, see?

Look, I don’t care if McGregor is racist or not. Frankly, it’s beside the point. He clearly has made comments that are racially offensive and he has damaged himself and his country by doing so.

So when he steps into the ring next month he’s going to be cloaked in centuries of racial discord. He didn’t have to put that cloak on, he volunteered to wear it. It’s the dumbest decision I have ever seen in sports. He might as well have put a giant target on his own back.

The thing that really disgusts people about this fight fap is the timing. Who asked McGregor and Mayweather to get into their FU emblazoned DeLorean's and take us all back to a time before Archie Bunker?

The worst thing I can say is that I want this fight to be over and these two out of the headlines. American society is deeply divided and anxious and uncertain of its direction or its future. It has enough to contend with without these two misreading the national mood and fanning the flames of an already long, hot summer.

Turn your TV off. Don’t put any money on either of them. When they do fight, we will all lose.