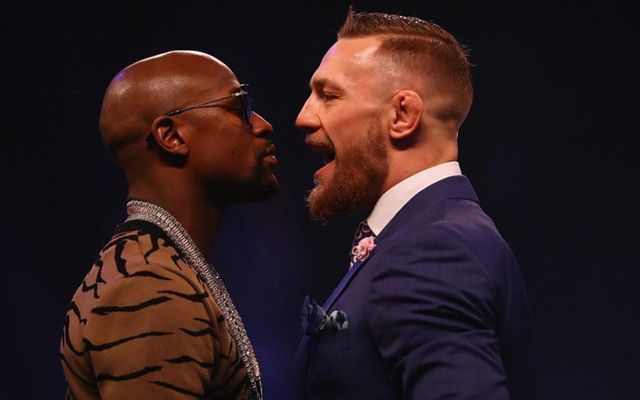 Floyd Mayweather and Conor McGregor square off at London. YouTube

Floyd Mayweather hurled anti-gay and anti-women slurs directed at Irish opponent Conor McGregor in the final press conference at the Wembley Arena, in London, while promoting their August 26 fight in Las Vegas.

Mayweather called McGregor a “p***y”, a “ho” and a “fa***t” in an expletive loaded tirade against the Dublin MMA star.

“Why don’t you shut the f*** up” McGregor replied to loud cheers as the two men continued to taunt each other.

After widespread criticism of Mayweather’s outburst Mayweather's rep rushed to his defense "The reason Floyd called Conor the F word is because Conor called Floyd a monkey. Floyd has nothing against gays or lesbians at all... Floyd has them on his staff. Floyd has nothing but the utmost respect for gays and lesbians."

Even though McGregor has been criticized for anti-Black slurs Mayweather has a history of racially tinged remarks as well.

Both McGregor and Mayweather are running out of material.

He called former opponent Manny Pacquiao a Filipino a “little yellow chump” and a “midget”.

The entire quote was "As soon as we come off vacation, we're going to cook that little yellow chump. We ain't worried about that. So they ain't gotta worry about me fighting the midget. Once I kick the midget ass, I don't want you all to jump on my d***. So you all better get on the bandwagon now... Once I stomp the midget, I'll make that mother f****er make me a sushi roll and cook me some rice."

Mayweather is also a woman beater. Seven times he has been cited or arrested for committing violence on women. When he found texts from another man on his ex-wife's phone he went to her place and attacked her.

.@JoyTaylorTalks: You're picking between two evils -- Mayweather thinks of women as less than human, while McGregor dances on racial lines. pic.twitter.com/hcGBJ9sEvI

He punched her repeatedly, pulled her off a couch by her hair and twisted her arm. Her son was able to call the police which, she says, saved her from being killed.

The level of vitriol has greatly increased over the three press a=events leading to speculation that the lead up to the fight, already the most hyped in recent history will become even more nasty and vicious as the ring date approaches.