In Dublin, remembering the magic of Thanksgiving at home

Living in Ireland over the Thanksgiving holidays makes you take account of what you are doing with your life. 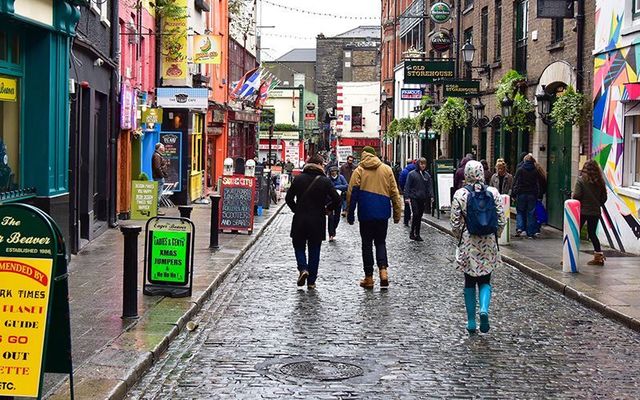 Temple Bar, Dublin: Living in Ireland over the Thanksgiving holidays makes you take account of what you are doing with your life. iStock

Thanksgiving in Ireland is the time you start to reassess whether you want to make Dublin your permanent home.

The phrase has been playing over and over again in my mind, like a guitar lick you just can’t get out of your head.

For some reason, when you live away from home, holidays and birthdays seem to be the days on which you really take account of what you are doing with your life.

And this week, around the American holiday of Thanksgiving (the one day in the year that we all traditionally spend with our families), is no different than the other holidays.

It’s like you want to answer the inevitable question that’s constantly playing in the back of your mind: what is it that's keeping me so far from my family and my home?

I turned 25 a month ago. I’m a quarter of a century-old; closing in on thirty. And what do I have to show for myself?

Many of my friends are foreign correspondents working in dangerous locations around the world, or have made noted documentaries that have helped people in need all over the world; they have good, solid jobs with purpose, and even, mortgages.

I have a stockpile of debt and a few part-time jobs. A lot of good friends and wonderful memories, but a lot of debt from basic living expenses.

I grew up in the Bronx. The good old Woodlawn section of the Bronx. When I was young, every time we drove into the city Manhattan’s inimitable skyline would play on my heartstrings and told me if I could make it there, I could make it anywhere.

In a way, I made it there. Well, I was at least well on my way towards making it there, working on several different documentary projects with a lot of heart. I never took a job that didn’t live up to my personal standard of integrity.

And then I came to Ireland. I had experience. Work ethic. Moxy, even. And after a year and a half, I still haven’t made it here.

My journalistic career has veered and sputtered, like a car that insists on dying, no matter what the driver does, since I’ve arrived. The silver lining is that I’ve made many, many lovely friends: infinitely interesting souls who have welcomed my sister and me with open arms and taught us all about Ireland, Irish culture, and how to live richly on a tight budget.

Is Thanksgiving the time to leave Ireland behind?

Most days, my sister and I are like stereotypical members of a Sean O’Casey-made family, falling into the category of, “they were poor but they were happy.”

But every so often, especially on holidays like Thanksgiving, those three words slice through all the others, and dig deep: cut and run.

That’s the phrase G.W. Bush used to use when his opponents called for a withdrawal from Iraq.

Although I never agreed with much of anything former President Bush had to say, I wonder if that ethos, that foolish pride, is part of what’s keeping me from going home. Why don’t I just darned well quit? As my brother often jokingly says, “quit while you’re far behind.”

This will be the second Thanksgiving I’ll spend with my sister in Ireland, in a country where the holiday technically doesn’t exist.

Last year, we celebrated by watching a film in the movie theater and exchanging the traditional turkey and stuffing dinner for spaghetti and meatballs at a restaurant along the Liffey.

This year, we’re not doing much of anything to celebrate. She is working a 9 to 5 job, and I am working a night-shift as a caterer, so by the time she gets home from work, I’ll already be in the city serving up mini samosas and sausage rolls.

I Skyped with my mom recently, and she told me all about my nephews, how they were growing, how they love to hug “Grammy” and “PopPop.”

Hugging. What a beautiful thing indeed.

It sounds very silly, but I can’t help but wish to hold my beautiful babies, even just for a few moments. I want to kiss their heads and tell them everything’s going to be alright, even if they’re not worried that it won’t be. I want to play with their soft little curls while they sleep on my lap, and be awed by how much they’re learning. I want to tell them I’m proud of them.

When my sister asks her boys “Where do aunty Mary and Baba live?” the boys automatically respond, “On Skype!”

I miss them, every single day. They just don’t know, because I’m 3,000 miles away. Now I have a small taste of what all of my undocumented Irish friends in New York feel. Sure, it's our choice to live abroad, but everybody gets homesick sometimes.

At least, I can get on a plane and visit my home when I save up the price of a ticket; the sad reality for my undocumented friends is that even if they can afford it, they can't leave the US, for fear of receiving a 10-year ban on re-entry.

I can't even imagine how homesick they must be after 8 years or 9 years when I'm this bad after two Thanksgivings.

Just last night, after my mother spent the day mashing and whisking in preparation for today's big feast, she sent me an email. She wrote, “Love you my Darlin...just ate some of the carrots and parsnips I prepared for tomorrow and was thinking about you and Baba.” It was a bittersweet message, as it made me realize all that my sister and I would be missing.

At some point today, I know at least ten of our immediate family members will sit around the long wooden table in our kitchen, enjoy a feast of mash and meat, share stories, and laugh about all of the silly things our nephews will say.

Is New York my proper home instead of Dublin?

So, what lies ahead? ‘Sticking it out’ for a few months longer in Ireland. Trying to find more freelance work, more hours at this and that odd job. Or, returning to New York City.

Grand Central Station. The smell of toasted bagels and burnt pretzels. People buzzing quickly through jam-packed city streets. The dirty, stinky, frightening, altogether lovely, beautiful enigma that is the New York City subway system. The kind of coffee that tastes like it’s from the bottom of a pot that has been boiling all day – not the fancy, foamy, European kind. That new york city skyline, which has changed in my life as much as I have. All that is familiar and comforting to me.

What would I leave behind? Some of the loveliest, most inspiring people who I feel privileged to call my friends. Learning to find my way from Dame Street to Cork Street. From Rialto to Rathmines. The town of Newcastle West, Co. Limerick and everybody in it. The way the afternoon sun makes sparkly diamond-shapes all along the Liffey. That fancy, foamy, European kind of coffee. Chocolate bars from Lidl. Camping in the rain. Getting to know and love family members you had previously only known by name. All that is new and fresh and exciting.

I’m not a quitter, I never have been.

But I’m getting older. I want a steady job, with a paycheck that will afford me the ability to be financially independent. I want to find my feet. That elusive room of one’s own. And I’m thinking Ireland isn’t the place where I‘ll find solid ground to build upon.

One of my favorite prayers is one you’d often see on the back of mass cards at funerals, a beautiful prayer for strength: ‘Lord grant me the courage to change the things I can, the serenity to accept that which I cannot change, and the wisdom to know the difference.’

I’ve instinctively found myself repeating those words these past few months, as I've never been more unsure of what tomorrow might bring.

Maybe it’s time. If I go home with my tail between my legs, in more debt than out after my year and a half abroad, at least I’ll be able to give hugs to my family members and dear friends whenever I want to. Surely, that’s worth more than anything else.

This week at least, most of my family members live in my heart, and my sister and live here in Dublin (and, of course, on Skype).