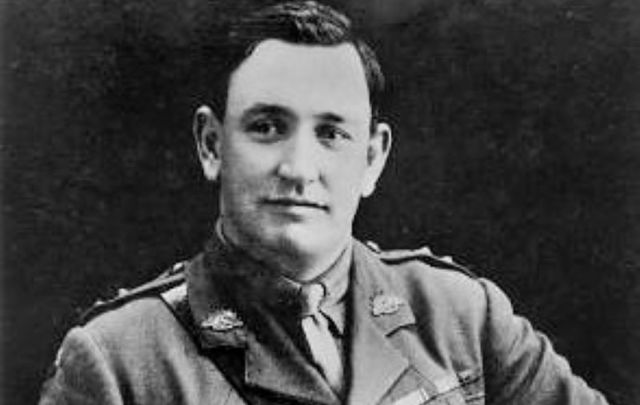 A one-man army and a recipient of the French Croix de Guerre in 1917 and the Australian Victoria Cross on St Patrick's day 1920. Known as the "super VC" for an attack so daring even the enemy patted him on the back afterward.

Lawrence Dominic McCarthy was born to Florence and Anne (nee Sherry) in York, Western Australia on the 21st of January 1892.

Both of McCarthy's Irish parents died when he was young leaving him orphaned. He was brought up in Clontarf Catholic Orphanage in Perth until he was apprenticed as a farmhand at thirteen years of age. McCarthy attributed the hardships he endured in Clontarf Orphanage to his successful career as a soldier.

Reports of Clontarf paint a picture of a brutal dog-eat-dog merciless environment and sadly but not surprisingly, accusations of sexual abuse emerged against the institution decades later.

McCarthy was initially rejected by the Australian army due to his loss of three fingers from a previous sawmill accident. He was later accepted after proving he had won a number of shooting competitions and enlisted on the 16th of October 1916 - the same day as the Battle of Yser where Col Alphonse Jacques somehow managed to hold the town of Dixmude while suffering heavy losses against the advancing German army.

McCarthy was posted to the 16th battalion with the rank private where he received the nickname "Fats" for his large build. He saw action in Gallipoli, the Battle of Pozières, the battle of Mouquet Farm, and the Hundred Days offensive that ended the First World War.

After McCarthy's time in Gallipoli from April-December 1915, he was promoted to sergeant.

By June 1916, McCarthy was fighting in France at Pozières and Mouquet in August. McCarthy was promoted to company sergeant major in March 1917 and received a commission as second lieutenant the following month. Shortly after receiving his commission, he was badly wounded at Bullecourt and hospitalized for three months in England.

In November 1917, McCarthy received the French Croix de Guerre and received another promotion to lieutenant. He returned to his battalion in time for the beginning of the Hundred days offensive in August 1918.

On 23 of August 1918, McCarthy performed what was described by (The official history of Australia in the war of 1914-1918) as "The most effective piece of individual fighting in the history of the Australian imperial force, next to Albert Jackas military cross winning feats at Pozières."

Near madam wood, east of Vermandovilliers, France, the battalion was heavily opposed by well posted by German machine gunners. McCarthy, realizing the situation, dashed across the open ground with two men to the nearest post, where, having outdistanced his companions, he put the gun out of action, then continued fighting his way down the trench. Later, having been joined by one of his men, together they bombed their way along the trench until contact was established with the adjoining unit.

During this action, McCarthy killed 20 of the enemy, took 50 prisoners, and captured 5 machine guns and 500 yards of the German front.

The battalion historian wrote following McCarthy's feat," the prisoners closed in on him from all sides and patted him on the back!"

McCarthy was awarded the victory cross and it became known as the super VC by the battalion and the London media.

After the First World War ended on November 21, 1918. McCarthy returned to his wife (Florence Neville) who he married the previous January. They had one son "Lawrence" that was killed in action fighting the Japanese in 1945 on the 20th of May 1945.

Lawrence Dominic McCarthy died at the repatriation general hospital in Melbourne on the 25th of May 1975 and received full military honors.