Larry Kirwan looks back at the ups and downs of Black 47's iconic 25-year career that was born out of a late-night saloon conversation. 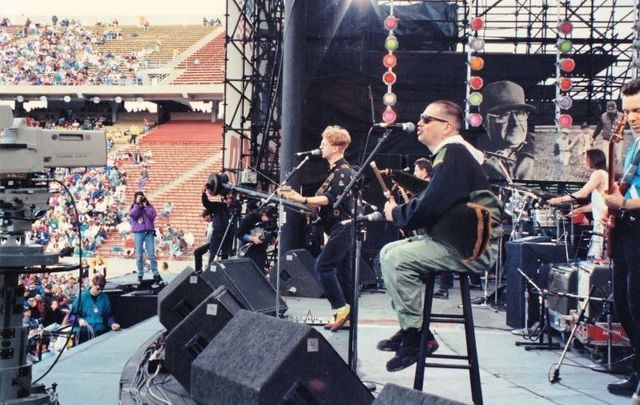 Black 47 on stage at Farm Aid. Courtesy of Larry Kirwan

Larry Kirwan concludes his chronicles "of a band who started out rockin’ Bainbridge Avenue in The Bronx and ended up adding to the universal message of faith, hope, and freedom."

Editor's Note: In previous weeks, Larry Kirwan and IrishCentral looked back album by album on the history of Black 47 and their rise to fame. Below is the nineteenth and final installment of the series. The previous installment in the series, "Larry Kirwan discusses 'Rise Up,' a compilation of Black 47's 'political' songs," can be read here.

The following was written by Larry Kirwan on August 14th, 2020:

Black 47 began with a late-night saloon conversation between Chris Byrne and myself about music. By the dawn, we’d formed a band, and soon thereafter began playing in the Irish pubs around Bainbridge Avenue in the Bronx. Within a couple of months, we were in the studio recording songs like the somewhat prophetic Too Late To Turn Back, and a year later we were opening for The Pogues at Brixton Academy for their Christmas show.

To say the journey from that initial conversation was dizzying would be an understatement. Over the next 25 years, we did around 2,500 gigs through a tragic shooting, a near-fatal van crash, the death of our soundman/recording engineer Johnny Byrne, and all manner of personal ups and downs. We also appeared on every major TV show, were written up by most media outlets, and recorded 16 CDs; luckily I took notes soon after finishing each CD. Over the last couple of years, I revisited those notes and commented on them in a series of articles for IrishCentral. Some of the notes were prescient, others hilarious and embarrassing in their ambition, but all were written in the flush of the moment and truthful.

Read More: And so it goes…"Last Call" for Black 47

Chris Byrne said to me on Black 47’s final night at BB King’s, “We were the band with no plan.” And he was right – to a large extent. We didn’t have any great notions of “making it” or of even being part of show-business. But through the fog of alcohol in our first conversation, I do remember our intention of being original and political. And with those ambitions, we headed to The Bronx and the reality of playing to pubs full of nannies and construction workers who didn’t give a fiddler’s for any such highfalutin concepts.

What was Black 47’s music like? To this day I still can’t describe it except to say we didn’t sound like anyone else. Part of that was because we didn’t rehearse. New songs were worked out on stage in front of unforgiving audiences. You needed a lot of attitude to pull off something like that and Black 47 was never short of ‘tude. As new members were integrated, they had to figure out their own parts in the arrangements. In the studio, I’d sometimes help polish these parts but onstage it was every man – and occasionally woman – for themselves. Add to this the fact that we never played the same set twice in 2,500 gigs and you’ll get the idea of organized musical abandon, but never chaos.

There was no dress or conduct code for Black 47, just a requirement that you put 120% into the music from the first song to the last encore. We took our moods onstage and worked them out through the music – no false smiles or phony introductions. The intensity could be sometimes off-putting for the uninitiated, but what did you expect from musicians most of whom had cut their teeth in CBGB ‘s and Max’s Kansas City. And yet we forged an incredible bond with our audience.

Many came for the political songs like James Connolly, Time To Go, Black 47, Bobby Sands MP that tended to be explosive without advocating violence. Others came for the party, for when Black 47 came to town it was a communal celebration with songs like Funky Ceili, Rockin’ The Bronx, Salsa O’Keefe, et al.

The political songs were there to make people think. There was an understandable folk hatred of Britain in Irish America. The forebears of many in our audience had left during An Gorta Mór. Our songs helped to channel and refine that hatred into political thought and action. In that, we were part of an overall movement that led to the Good Friday Peace Agreement. We also caused a change in social attitudes with songs like Danny Boy that cast the iconic Daniel as a kick-ass Gay Irish construction worker, much to the chagrin of Irish promoters back in 1993 and for many years after. Our influences included Reggae, Funk, Latin-Jazz, and our bass player and road manager for a long time were African-American so there was no doubt where our sympathies lay. One of our popular songs was about Paul Robeson (the greatest American), and his face adorned our stage banner for many years.

Darker days were to come. In 2003, we came out strongly against the invasion of Iraq and began writing songs about the conflict. For the next four years, we were the only band who insisted on singing about the war every night. We lost many gigs and friends through that but what could you do? We were Black 47! To us, it was the height of patriotism to resist your government when you know it’s wrong – not just toe the line like Rock ‘n’ Roll puppets. Eventually, the country came around to our point of view and audiences began dancing to Downtown Baghdad Blues, not walking out during its first notes.

The highlights – there were so many – meeting Johnny Cash, Joe Strummer championing us and declaring “Black 47 is the only band that matters,” co-producing Fire of Freedom with Rick Ocasek and learning so much from his artistry, but mostly being privileged to play with band members like Chris Byrne, Thomas Hamlin, Geoffrey Blythe, Fred Parcells, David Conrad, Kevin Jenkins, Andrew Goodsight, Joseph Mulvanerty, Joseph “Bearclaw Burcaw,” and Andrew Sharp. I often trumpet our improvisational chops but take a listen to the musical sophistication of Big Fellah (Michael Collins), a song that incorporates influences from The Lament of Art O’Leary through opera, punk, classical, jazz, you name it. Oddly enough this song was featured for three minutes in the FX show Sons of Anarchy. You never know where you end up when you’re original.

And how can you forget the road managers and technical crew who shared everything with us - Johnny Byrne, Tom Gartland, Nico Wormworth, Jon Carter, John Murray, P2, Joey “Knobs” Juntunen, Cathal Moore, and George Kornienko. And but a small collection of those who stuck with us through thick and thin - Tom Schneider, Monsignor Steve Duggan, Pete Ganbarg, Vin Scelsa, Elliot Roberts, Brian McCabe, Paul Hill, Staten Island Tom Marlow, and our dear Phyllis Kronhaus.

But most of all, thanks to the legion of fans and friends from all over the world who supported us on our unlikely journey. And finally, a thank you to Fran Mulraney and Kerry O’Shea who encouraged me to tell this story of a band who started out rockin’ Bainbridge Avenue in The Bronx and ended up adding to the universal message of faith, hope, and freedom.

Larry Kirwan was the leader of Black 47 for 25 years. He is also a playwright, novelist, and a columnist for The Irish Echo. He is the host of Celtic Crush on SiriusXM Satellite Radio and was President of Irish American Writers & Artists for five years. He can be reached at blk47@aol.com and Black 47's website.