"Rise Up" was the final album Black 47 released before they disbanded in 2014. 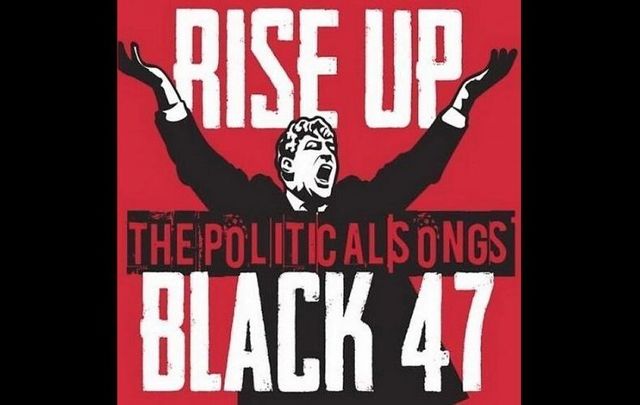 Rise Up, a compilation of their "political" songs, was the last album released by Black 47. Black 47

Larry Kirwan says "Some songs held us back, others pushed us forward; whatever, they all capture a moment."

Editor's Note: In the coming weeks, Larry Kirwan and IrishCentral will look back album by album on the history of Black 47 and their rise to fame. Below is the eighteenth installment of the series.

The previous installment in the series, "And so it goes…"Last Call" for Black 47," can be read here.

When Chris Byrne and I decided to form Black 47 in late 1989, our rationale was simple. Bob Marley was dead, The Clash had broken up - there was an opening for a political band. We hadn’t even had a rehearsal nor did we have songs, but we did have gigs since Chris’s band Beyond The Pale broke up that night with a month’s schedule to fill. Each of those gigs required us to play four sets – so survival on Bainbridge Avenue was the first thing on our minds. We figured that we only needed three sets since no one who heard the first would likely be still there when we played the fourth. Still, within six months, we were an all-original band. If you wanted to hear covers of The Pogues, The Waterboys, or Christy Moore – the Big 3 on the Irish Pub scene back then - go somewhere else!

It was a bad time in the North of Ireland – the struggle had been going on for 20 years with no sign of resolution. So our first songs were about Irish politics, current and historical. We were also interested in Irish immigration and the problems of the undocumented (I’d been one) and, of course, Irish America itself. We did many benefits and were involved in various issues, including support for the LGBTQ community through ILGO. Our Danny Boy song about a Gay Irish construction worker caused much concern within the conservative Irish American community but the track got FM airplay and led many young people to question their traditional beliefs.

It seemed to be one controversy after another especially during the Giuliani years; then came the invasion of Iraq which we vehemently opposed. The next three years were a battle as the “patriots” protested our stand but eventually, people began dancing to Downtown Baghdad Blues rather than storming out. Then came the Bankers and Gangster years of the Great Recession, and so on and so forth and so fifth as John Lennon might have said.

As Black 47 headed towards disbandment in 2014, I decided to do a compilation album of political songs. We had about 50, depending on what you call “political.” I didn’t want to do a greatest hits, so many favorites were omitted, whole years, eras and albums untouched; still, what a trip – from Belfast to Baghdad, Wexford to Washington DC, Béal na Bláth to Salt Lake City. Some songs held us back, others pushed us forward; whatever, they all capture a moment. Rise up!

The below was written by Larry Kirwan on September 27, 2014:

With almost 50 songs to chose from it’s been a hell of a job getting the list down to a manageable 15. After re-mastering the songs with producer Stewart Lerman I recorded a few words about each and then transcribed them. So, herewith…