"One hell of a compilation" - Larry Kirwan's Celtic Invasion

Larry Kirwan discusses how his Celtic Invasion compilation album was born out of a music market that was hitting new lows. 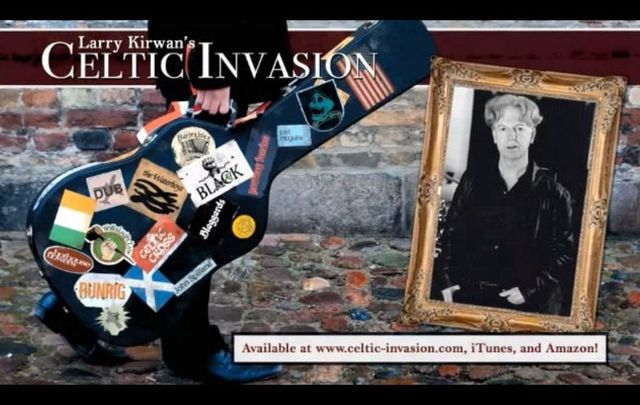 Larry Kirwan discusses how he brought together some of his favorite acts in 2013 when the music industry was hitting new lows.

Editor's Note: In the coming weeks, Larry Kirwan and IrishCentral will look back album by album on the history of Black 47 and their rise to fame. Below is the seventeenth installment of the series about the group's album "A Funky Ceili," released in 2011.

The previous installment in the series, "Drive on and Rock on with Black 47's 'A Funky Céilí'," can be read here.

Below is a note from Larry Kirwan, written June 2020:

I still really like Celtic Invasion – both it's content and pacing.  All the performers were very familiar to me, either through sharing stages with them or by playing them frequently on Celtic Crush/SiriusXM. In most cases I didn’t use their “emphasis” tracks, I looked for songs I personally liked. In general, I picked up-tempo songs to give a party atmosphere.

I had intended to do a second compilation that would deal more with the moody and meditative side but, alas, the best-laid plans of mice and men. Whatever, this is a portrait of a time when the music business was changing.

From an artist’s perspective, particularly financially, the business is now for the most part on the ropes.  But each of these songs still stands up, artists will find a way to survive and continue to make meaningful music.

The below was written by Larry Kirwan in March 2013:

The music “biz” is hitting new lows – and that’s saying something. Where once fat men in cheap suits up on 57th Street ripped you off with a smile, now faceless young dot.com warriors “lease” your songs and pay minute fractions of a cent when one is played. Still, you can sit around lamenting that you didn’t major in computer programming rather than Stratocasters, or you can find other ways of getting paid for making music.

While having a drink with Jon Birgé of Valley-Entertainment, we hit upon an alternative: get a great song from each of a dozen fine acts and put out a compilation CD? Ideally, the artists should be from the same field but have a different artistic sensibility. Since I seem to know every Irish-American band along with their maiden aunts, my gig was to choose the material – Jon to market the CD.

We set a couple of ground rules: bands would get a small advance and a royalty on each CD sold. The bands could also buy the CDs at wholesale cost and mark up accordingly.  Thus each band would be paid a royalty for every CD the eleven other bands sold, along with a first-class introduction to eleven other fan bases. In other words, the more you sell the more you make; the more anyone else sells, the more you make too! And if one song were to take off, then all twelve acts would be in the gravy.

The trick was to enlist the most interesting bands, and choose songs that would not only gel together but appeal to a wide audience. Hosting Celtic Crush on SiriusXM for almost eight years has given me some insight into the latter. I pride myself on finding great songs that have been overlooked in our teeming musical meat market.

It doesn’t take a degree in rocket science. You just have to wade through an ocean of refined mediocrity to find a track that both sparks your interest and contains that ineffable something that will move a mass audience.

Thus I chose a number of overlooked local classics like “You’re So Beautiful” by Pat McGuire, “McLean Avenue” by Shilelagh Law, “22” by Celtic Cross, “Weekend Irish” by Barleyjuice, and “Sullivan’s Lake” by Garrahan’s Ghost.

To bring in a wider Celtic influence I included two Scottish gems: “Clash of the Ash” by Runrig, the best band you never heard of, and “Wacko King Hako” by Peatbog Faeries who put grooves under bagpipes that have to be heard to be believed.

I needed a couple of names for marquee value: Mike Scott gave me a brilliant unreleased version of a Waterboys classic, as did Hothouse Flowers. I tossed in the zany “Uncle Jim” by Black 47, which tells of Fr. Jim Hughes quixotic mission to East Belfast to convert the Rev. Ian Paisley. The CD is called Celtic Invasion and also contains “The Irish Rover” by Blaggards, the kings of Houston, and “Buile Mo Chroí” by John Spillane, the bard of Cork City.

Officially released last week, Celtic Invasion has been picking up radio play all over the country and selling like cold pints in August. You can get a free download of my “intimate” thoughts on each band at www.celtic-invasion and if such ravings pique your fancy you can purchase the music in digital or CD form – no “leasing” necessary!

Will this idea succeed? I haven’t a clue, but it’s one hell of a compilation that crackles from first beat to last and will shake the dust from the ceiling at any gathering – St. Patrick’s Day or otherwise.  It’s already a success – Your Man Up In Pearl River says it’s the hottest thing since fried bread - and if it breaks even financially then we’ll round up another dozen acts and give them the same opportunity to beat the dot.com leasers!

And if it fails, well we tried to make a difference, and at the very worst I might still have a career ahead of me as a fat cat in a cheap suit up on 57th Street.

The following was published on Valley Entertainment:

"Larry Kirwan has been carrying the flag for Celtic rock music since the founding of Black 47 in 1989. The expatriate Irishman lives in New York City where he has been hosting Celtic Crush on SiriusXM since 2005. Kirwan, also a respected writer, has published three books and writes a column for The Irish Echo - the USA's most widely read Irish-American newspaper.

"Larry Kirwan's Celtic Invasion features a dozen of his favorite bands and most requested rock tracks from his SiriusXM show Celtic Crush. The album includes legends like The Waterboys, Runrig, and Black 47 (just to name a few) with popular U.S. touring groups Blaggards, Barleyjuice, Garrahan's Ghost, and Shilelagh Law.

"Don't forget to check out Larry's Introduction! Hear his deeper thoughts (and quite a few stories) about all the bands featured on "Celtic Invasion". You can listen to this 25-minute introduction here:

"This is an album with a mission: to bring together some of the best Celtic rock that Larry Kirwan has heard, and it succeeds magnificently. It features some great eclecticism within that focus, and the variety adds to the appeal." — Michael Thompson, Denver Celtic Music Examiner

"...you've got a fresh Celtic compilation that will impress all of your party guests this St. Patrick's Day Season" — Liz Noonan, Irish Echo

"Rock fans will eat this collection up and others will, if they open their mind to it, find fun they would have normally missed. Nice to find a CD that makes you open your eyes and reconsider your preconceived notions." — Irish American News

"It is hard to single out which is better. Every band excels through its own style. And this is a compilation of the creme de la creme of Celtic rock. It’s like riding the kaleidoscope of sounds where everything sparks up and it is hard single out one color from the other." — Baxter Labatos, The Celtic Music Fan