IrishCentral Contributor CJ Clancy looks at the life of Irish man John Francis Peggotty, a bushranger famous for robbing people while riding on an ostrich in South Australia. 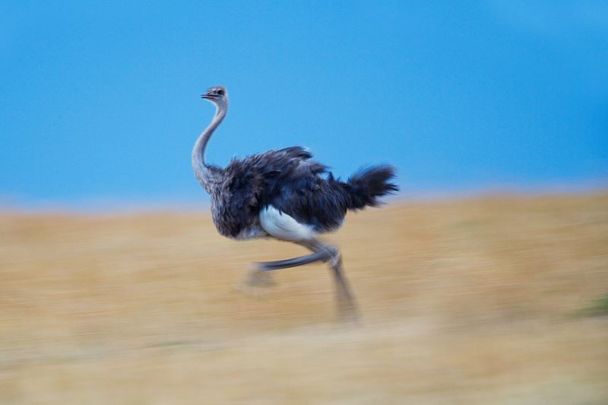 John Francis Peggotty was born three months premature in Co Limerick in 1864. It's believed he never grew much taller than a seven-year-old child as a result of his premature birth.

In 1882, Peggotty moved to South Africa, where he learned to handle and ride ostriches. Ostrich racing was a popular sport in South Africa at the time and Peggotty had the ideal height and physique for it.

After spending a number of years in South Africa, Peggotty wound up in London, where he survived by pickpocketing and burglary. He used to break into houses by climbing down chimneys and stealing what he wished.

Eventually, Peggotty's luck ran out and he was caught, receiving a hefty fifteen-year jail sentence that was reduced to five.

On his release, Peggotty set sail for Australia to work for an uncle in New South Wales. After working for a short spell with his uncle, he moved to Adelaide where he formed a gang made up of young street urchins.

After several years of stealing and hustling, a small number of the gang were busted by Adelaide police, who estimated the gang was responsible for stealing £30,000 worth of gold and jewelry. Peggotty, unlike the rest of the gang, had already endured prison and disappeared.

In 1898, a lone John McLaughlin was walking along the Murray River when he encountered a semiclad Peggotty, brandishing two pistols and covered in jewelry and gold chains, sitting proudly on top of an ostrich.

McLaughlin was forced to hand over money, a gold watch, and half a bottle of brandy at gunpoint. When McLaughlin reported the incident to the police, he wasn't believed. Who could blame them!

Peggotty continued with his brazen hold-ups across the Coorong, including two where Peggotty killed the victims in separate robberies. At this stage, police were taking the reports of the ostrich robberies seriously. When they found ostrich tracks at the proximity of each murder scene, the police had only one suspect.

On the 10th of January, 1899, four police officers on horseback spotted what they initially thought was a child perched on an ostrich at the eastern side of the Coorong. As they edged closer, they saw the rider had a thick, scruffy black beard. Sergeant Cooper ordered his men to close in and apprehend the fugitive.

On spotting, the police hastily approach him and Peggotty pulled out his pistol and fired in the direction of the officers. A gunfight ensued. Peggotty fled the scene on ostrich with the police giving chase. As soon as Peggotty reached soft sand, the horses were unable to keep up with the ostrich, resulting in Peggotty escaping unscathed.

On the 17th of September, 1899, Peggotty spotted a fisherman and set about carrying out another hold-up. Initially, the fisherman, Henry Carmichael, dismissed Peggotty as a young foolish delinquent. When he realised the seriousness of the situation, Carmichael whipped out a riffle, prompting Peggotty to flee in terror. Carmichael took aim and fired, hitting the ostrich from a considerable distance, killing it instantly. Carmichael took aim again and fired a second shot, striking a dazed Peggotty.

A wounded Peggotty crawled to nearby undergrowth leaving a trail of blood. His body was never found and he was never seen or heard from again. It's believed the remains of John Francis Peggotty lay undiscovered in a location somewhere in New South Wales along with the estimated £30,000 worth of jewelry he was wearing on the day he shot.

Posted by Birdman of the Coorong on Tuesday, April 1, 2014