Isn’t it time we stop blaming women when they’re attacked?

For all the visibility of recent campaigns like #metoo, #ibeliever her and #whyididntreport, the disappointing truth is that it seems the conversation hasn’t moved on. 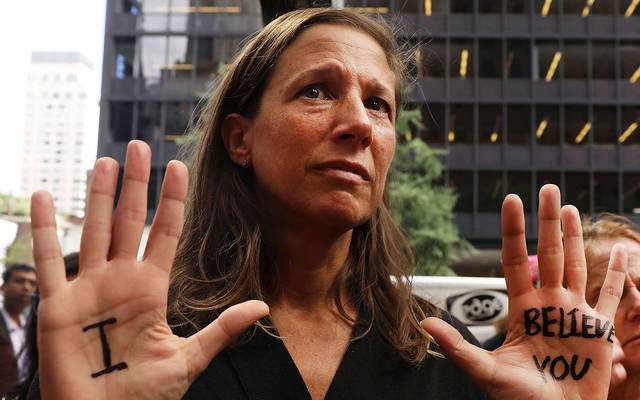 Dozens of protesters against the confirmation of Republican Supreme court nominee Judge Brett Kavanaugh gather outside of Democratic Senator Chuck Schumer's office on the afternoon that the nation is watching Professor Christine Blasey Ford testify against Kavanaugh on September 27, 2018, in New York. Spencer Platt/Getty Images

For all the visibility of recent campaigns like #metoo, #ibeliever her and #whyididntreport, the disappointing truth is that it seems the conversation hasn’t moved on.

This week the Irish Examiner revealed that three female college students in Cork have reported they were raped in separate incidents since the start of the university term.

In a subsequent discussion around the story on Newstalk’s Lunchtime Live show, presenter Ciara Kelly read out a tweet from a (female) listener. It contained the lines,

“Have these girls no shame? Dress appropriately and then nothing will happen to them."

Ciara, barely containing her anger as she read out the text, had some stern words for the anonymous texter.

"'Have you no shame?' That’s what your response is? Shame on you for sending that text…You may be a woman, but you’re no supporter of other women.”

She's absolutely right. And, really, the texter's comment seems all the worse because it was sent by a woman. Where is the solidarity? The understanding that any person (men too) can be attacked? And that the burden of blame is not with them? What a woman was wearing when someone decided to assault her had no bearing on the events.

In light of the three girls being raped in Cork, one @LunchtimeLiveNT listener texted in to say "Dress appropriately and then nothing will happen to them". @ciarakellydoc shares her thoughts on the text. #NTFM pic.twitter.com/6dsCBRE2e6

“Rape is a violent crime, and a power crime and anyone who says otherwise is lucky enough, maybe, not to have experienced it.”

It is never the victim's fault, yet we seem to persist in this, "Ah, yes but what was she doing there?" apportioning of blame.

Along with this casual dishing out of guilt and shame, the broader conversation around assault seems to center on women making themselves safe or avoiding danger. It seems it's up to us to bend and restrict ourselves, to keep ourselves safe.

Campaigns warn women to stay alert, not to walk alone after dark, to keep an eye on their friends on a night out. Even in this more enlightened age that we claim to live in. Is this the best we can do?

When do we turn the focus on the perpetrators? Okay, yes, it would be beneficial if women did take some precautions, because, quite simply, we do live in a messed up world. You shouldn't have to walk home with your keys wedged between your fingers, as a makeshift defense, or take a martial arts class so you feel less afraid when on your own.

But women can take those steps for themselves if it helps them feel stronger. We as a society still have to face the bigger issue. It is still is worth asking: when will we focus on the perpetrators, not the victims? Teaching our young people - boys in particular - about consent, respect, boundaries and dealing with emotions is essential.

It is not an easy issue to solve - humans have long brought violence upon each other - but if we are to have any hope of making the world safer and more equal, It’s time to change the conversation. Women, and men, should demand it.

What did you make of the texter's comment? Let us know in the comments section, below.

* This article was originally published in our sister publication Irish Tatler.