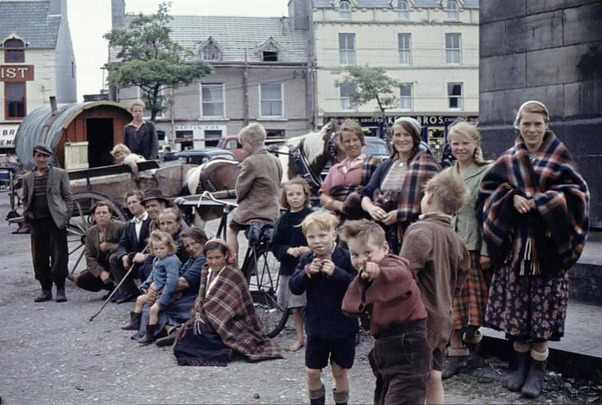 Are you like me, dying for autumn and winter 2020 to come and go, and longing for spring 2021 and a new beginning? Here's a new book to look forward to in spring 2021.

During the lockdown, I enjoyed consulting Irish Traveller Manor Donohue’s Facebook site. I discovered him through Andy Hamilton’s posts. Hamilton is a writer and one of Ireland’s top journalists, reporting rural Ireland in excellent penmanship.

Manor Donohue lineage is of pure Irish Traveller royalty; the grandson of John Donohue - the great-grandson of John ‘Jonty’ Donohue and his wife Sarah and grand-nephew of the famous Traveller Right’s activist Joe Donohue. On his Facebook page, in the evening, Manor often asks a rhetoric question; do ye want me to tell ye a little story? His audience is for the most part Irish Travellers, writers, and Irish musicians, some of them in the star category.

I grew up without television with all the advantages and disadvantages that brings. One advantage was listening to my father’s stories. Most of his stories were ghost stories; mid-story they were so scary I would seek shelter under his big armchair. However, I would never have asked him to stop!

Those stories were a legacy of a father who was 61 when I was born. He gave me a glimpse into Offaly folklore that went much further back than my friends’ parents. The stories often featured black dogs with red eyes seen before the appearance of a stranger with a concealed but distinctly hoofed foot…Or the appearance of a mysterious woman dressed in white, sitting on a garden wall, combing her long straight dark hair.

Gathering around the virtual campfire with Manor, reminded me of those storytelling days of my youth. However, I quickly realized that Manor’s stories are of the less scary type, and comprise exquisitely, imaginative tales of spirits and fairies, of the cycles of nature along with real-life stories of his family and ancestors. Here’s a short one that parallels my current restlessness.

Just imagine you are around the campfire, with Irish Travellers[1], (“an lucht siúil”; “the walking people”) and let yourself be transported by Manor’s own words, as he describes his great-grandfather Jonty’s impatience for spring:

“My great-aunt, Nan Donohue[2] was the sister of my grandfather, John.

Nan was born on a cold, wet November day in 1919. At the time of her birth, Nan and the rest of her brothers and sisters (along with their mother, Sarah) were camped in a tent outside of Granard, a small village deep in the Irish midlands. Nan’s father, John ‘Jonty’ Donohue - was serving in the army at the time.

When Jonty[3] returned from the army - they moved into a house in Edgeworthstown, which is a little over 10KM from Granard, (both in County Longford). The family would spend the winter in the house and then take to the road again, which was usually on St Patrick’s Day. My great-grandfather Jonty would say to his family, “I wish to god it was the seventeenth of March, St Paddy’s Day, when the stones turn in the water.” Back then, people believed that the stones turned in the water on that day - and cold went out with the turning of the stones, and warmth would start to join the air. Jonty would also say, “I wish i could go and get some money for the family - I hope St Paddy’s Day hurrys to us.” A few days before St Paddy’s Day, he would have his chimney equipment ready and would be excited at the prospect of working again ».

Many Irish Travellers still follow the same rhythm as Manor’s great grandfather, going back the road mid-March after spending life indoors during winter.

Like Jonty, many of us have recently been excited at the prospect of rejoining the workforce or, for people who unfortunately lost their jobs during COVID, by the prospect of finding new employment. The over settled life of lockdown, and life as we now know it, makes many of us yearn to shake off the restrictions of a COVID regime. However, like the Travellers of yore, we know we just have to hunker down for the time that’s in it. In spring, “when the cold goes out with the turning of the stones”, COVID might also be on the way out, and hopefully by then we will have the protection of a vaccine.

I’ve read books about Irish Travellers and also recently saw a beautiful photograph collection “The Secret Lives of Irish Travellers Revealed in Intimate Portraits”, by Joseph Philippe Bevillard, shot over the last decade. What I haven’t yet seen is a book with photos from an Irish Travellers’ personal archives, with the accompanying text exclusively written by an Irish Traveller, in their own lilting language, transliterated from their dialect ‘Shelta’ also known as ‘the Cant’ which some believe existed as far back as the 13th century and was the language of the ancient Bards of Ireland. Its rhythm hovers behind the English words Irish Travellers speak making for a special cultural lyricism and language.

Chance would have it that Manor has just contacted me to let me know me that when IrishCentral published an article in January 2020 quoting a piece he wrote on heritage, it gave him the confidence to scribe and document his family’s stories further, and he is now embarking on a book project.

For Manor heritage is “a story in many ways - it begins with the original storyteller - and passed along to the person who currently tells it. If we stop telling the story, then it’s forgotten, forever.”

The best of Irish luck to Manor Donohue, a proud Irish Traveller and modern-day Bard, as you pick up your pen to perpetuate your own heritage. It seems as if the project of Manor's book, in some way hailed from the encouraging pages of IrishCentral, and also in anticipation of spring 2021 and those many new and wonderful roads to travel…

[1] In the 2016 census, it was estimated that there were approximately 30,987 Travellers in the Republic and 3,905 in Northern Ireland – Irish Travellers achieved recognised ethnic status in 2017.

[2] Nan Donohue’s story was told by Sharon Gmelch in the book “Nan: The Life of an Irish Travelling Woman” https://www.goodreads.com/book/show/952360.Nan