The women were accused of demonic possession of a teenage girl's body mind and spirit. 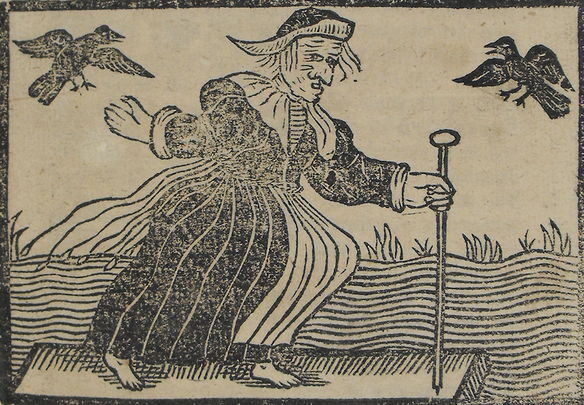 Documents reveal a situation, described as something from "The Exoricist", where demonic possession took over and women who were marginalized, poor, and perceived to have some kind of sway were accused.

An Irish witch trial that occurred 300 years ago is the focus of the book “Witchcraft and Magic in Ireland, 1586-1946". A University of Ulster lecturer, Dr. Andrew Sneddon, researched Ireland’s witching history for his recently published book in 2011. According to his research, he found evidence of three trials in Ireland involving eleven accused individuals.

The most prominent trial dates back to March 1711, when eight women appeared in a Carrickfergus court on trial for witchcraft. The women were accused of demonic possession of a teenage girl's body mind and spirit. They were later found guilty and were put in stocks where the public threw stones and rotten fruit at them before they were jailed for a year.

The incident occurred in Islandmagee, a peninsula off the east coast of County Antrim.  Sneddon suggests the intensity of the witch trial was down to the local residents' strong Scots-Presbyterian heritage.

"There was a lot of belief in Protestant settler islands and mainland Ireland, even if there weren't many trials," he says. "There was one trial in Youghal, Co Cork, in 1661 among an English settler community.

"They brought their ideas with them to Ireland. Witch-hunting in Scotland was one of the worst in Europe, far worse than England. Some 3,800 people were prosecuted there, and more than three-quarters were put to death by strangling and burning. But in England, and so by extension in Ireland, they had common law, so those convicted were only hanged."

The case itself was widely documented, which allowed the professor to use primary sources, including witness statements, newspaper articles, pamphlets, letters, and even legal documents.

The case began in 1710 when Mary Dunbar (18) arrived on the peninsula from Belfast. She came to stay in the home of a cousin, Mrs. James Haltridge, who had just died, apparently as a result of witchcraft.

According to the trial records, Dunbar claimed to have seen eight phantom women.

“Spectral evidence was used in the case, where the demoniac [possessed person] claims to have seen and, most likely, been attacked by the witches causing his or her possession in spectral form," Sneddon explains.

"As a form of evidence, this was becoming less and less convincing in England, but that was one of the main proofs against the eight women in 1711. The only person who would have seen this spectral possession is Mary Dunbar, and being a stranger in the area, she'd never have seen these women before. So she claimed anyway."

Read more: On trial for witchcraft – Irish women of sorcery or power?

The character of the eight women was an important factor in their conviction, Sneedon says.

"If you had a reputation, or someone in your family did, and then some kind of misfortune occurred, or, in the case of Mary Dunbar, you were accused of bewitching someone, then it was taken more seriously. Some of these women had that reputation.

"In fact, they were marginal and poor, and I think some of them had previously claimed to have some witchcraft power. There was a stereotype at the time of a wizened old woman -- like we have now of the witch -- and these women, looks-wise, fitted that description."

Based on his research, Sneddon thinks Mary Dunbar made the entire thing up.

"Like a lot of demoniacs in England and Scotland, I think Mary Dunbar learned and followed a script," he suggests.

"There had been witch hunts and trials in Salem, Massachusetts, in 1692, and in Scotland in 1696, where an 11-year-old girl, Christian Shaw, claimed to have been possessed. That resulted in seven people being put to death.

"These demoniacs all have the same symptoms. I think Mary Dunbar learned the part of a demoniac from accounts about Salem or Scotland, or someone told her about it. Remember, this was a time when people were pouring in from Scotland.

"Do I think some symptoms were psychosomatic once she got into the part?" he asks. "Maybe. Ironically, she's doing the same kind of things that the witches she's accusing are castigated for, but because it's not her fault, there's no moral responsibility. It's someone else who is doing it to her, so she can break the type of behavioral constraints placed upon her as a female at the time.

"Basically, she can get away with murder."

There is no historical record of what happened to Mary Dunbar or the eight women, as the public records office was burned down during the Irish Civil War between 1922-1923.

Change the way you shop Irish products with this unique marketplace