Frank O’Keefe has seen a lot in his 20-plus years as a member of New York City’s Sanitation Department -- massive blizzards, hurricanes, even 9/11. 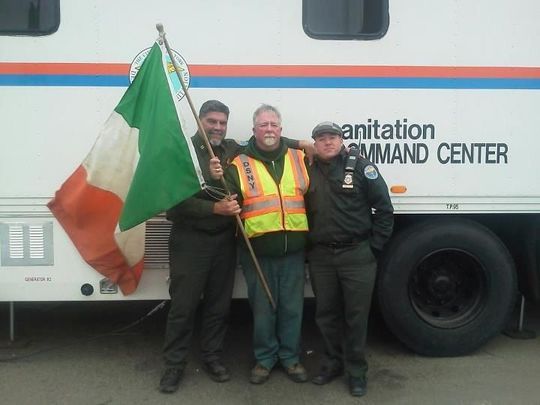 Frank O’Keefe has seen a lot in his 20-plus years as a member of New York City’s Sanitation Department -- massive blizzards, hurricanes, even 9/11.

Nothing prepared him for what he saw when he reported for work in the Rockaways after Hurricane Sandy.

“Any pictures you’ve seen do not do it justice,” said O’Keefe, whose parents were born in Kerry.
“It’s like nothing I’ve ever seen.”

O’Keefe, a Sanitation Department superintendent, was dispatched to the Rockaways after the storm. He, along with countless other members of the department, immediately began cleaning up ravaged, heavily-Irish communities such as the Rockaways, Breezy Point and Broad Channel.

The Sanitation Department, known as “New York’s Strongest,” has transformed Jacob Riis Park into a massive trash storage facility. Many of the workers and supervisors cleaning up Queens have not had a day off since the storm hit.

Not long after the clean up got underway, O’Keefe noticed something.  Many key leaders of the department’s Queens clean-up effort are Irish Americans, active in the department’s Emerald Society and Pipe and Drums Band.

The top supervisor on the operation, for example, is Deputy Chief Jim McGovern.  Deputy chiefs Danny O’Leary (an Emerald Society vice president) Roger Leahy (a pipe major) and Keith Woods, as well as Assistant Chief Joe Hickey (a piper with the band) are also key players.

Sanitation workers on the streets in the Rockaways include Jimmy McGoorty as well as Ed Shevlin, who is well known in Irish circles for his fluency with the Irish language.

Shevlin has studied Irish in Galway, after wining a grant from the Fulbright Commission, and is working toward a bachelor’s degree in Irish studies. He has said he plans to earn a master’s degree and eventually teach college.

Does having all of these Irish Americans help the clean up operation?

“Absolutely,” says O’Keefe. “You have everybody’s cell phone numbers.  It’s easy to get in touch with people.  You know where everybody is.  And maybe there’s even a bit more camaraderie.”

Given all the pain and suffering caused by Sandy, it’s been easy to forget the tremendous job done by all of New York’s Sanitation workers, and what they’ve done to help bring some kind of sense of normalcy back to New York.

Sandy, in short, gave New Yorkers a chance to sing the praises of New York’s unsung heroes.  (Full disclosure -- my own father retired from “The Strongest” back in the late 1980s.)

Among those working to clean up the Rockaways were many sanitation workers who themselves suffered property damage, lost homes or had family members displaced.

“Coming to work was almost therapeutic for them,” said O’Keefe.  “It took the focus temporarily off of their personal issues.”

Whatever their background, sanitation workers tasked with cleaning up what Sandy left behind faced unprecedented challenges.

“Never ever in the history of the department have we had a clean up like this,” noted O’Keefe, who grew up in the Woodlawn section of the Bronx.

“People had to get together and use their experience and the knowledge they acquired over the years.”

O’Keefe added, “There’s still a lot of work to do, but given what it looked like two weeks ago it’s almost a miracle.”

And while residents have been hit hard by power outages, homelessness and looting, O’Keefe has been blown away by the strength of Queens residents.

“The people here are incredibly resilient.  They have loved us and they’ve really responded to our contribution here,” he said.

The Irish American sanitation workers and residents have actually started looking ahead to the first Saturday in March.  That is the traditional date of the Rockaways annual St. Patrick’s Day parade.

“They want to have it,” O’Keefe said of local Irish residents.  “I think that’s going to be their big comeback.”

And will the Sanitation’s Pipe and Drums band be there?

“Absolutely,” O’Keefe vowed.  “We march in it every year.”