Abie’s Irish Rose was a controversy in its own way.  It was wildly popular with audiences.  Elite critics hated it. 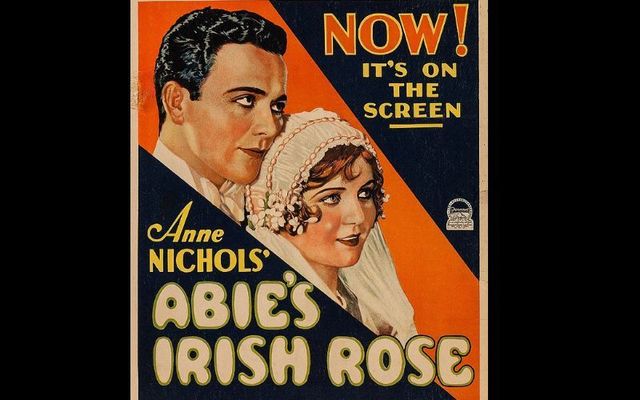 A poster from the 1928 film "Abie's Irish Rose". Public Domain

It was just one of those weird coincidences.

Last month, veteran stage and screen actor David Birney died at the age of 83. Birney was known for roles in TV shows like St. Elsewhere as well as a bunch of Broadway hits, including a late 1960s run of the Irish classic by JM Synge, Playboy of the Western World.

But for TV viewers of a certain age, Birney might best be remembered for the role he played – and the controversy surrounding – on a sitcom called Bridget Loves Bernie.

And the controversy had nothing to do with the priceless fact that a guy named Birney played a guy named Bernie.

By most measures, Bridget Loves Bernie was a hit.

“CBS gave it a plum time slot between All in the Family and The Mary Tyler Moore Show on Saturday night,” The New York Times noted, and “it consistently finished among the top 10 programs in prime time.”

But, as hard as it might be for some folks to imagine these days (wink, wink), there was once a time when people were very sensitive about religion and ethnicity.

In short, there was a cancel culture war over Bridget Loves Bernie.

“The program treats intermarriage, one of the gravest problems facing Jews today, not only as an existent phenomenon but one that should be totally accepted,” Rabbi Balfour Brickner, director of the Commission on Interfaith Activities, was quoted as saying in 1973.

The Hollywood Reporter noted that “Jewish groups back then launched a full-scale protest to get the series off the air,” and that “Baxter even reported getting bomb threats, and the series, though in the top 10 in the ratings, was not renewed.”

Remember all this the next time you hear someone ranting and raving about how people are too sensitive “these days,” and how older immigrant groups were so much better at “taking a joke.”

Anyway, the coincidence in all this is that the Broadway star Birney, a Cleveland native “who was Irish American,” as the Times noted in his obituary, died the same month that another Irish-Jewish story, a Broadway classic, celebrated the 100th anniversary of its debut.

“Abie’s Irish Rose, which mark(ed) its 100th anniversary on May 23, was a phenomenon like few others in stage history,” the Times noted.

And TV. Including a certain David Birney-Meredith Baxter Irish-Jewish sitcom.

Abie’s Irish Rose was a controversy in its own way.  It was wildly popular with audiences.  Elite critics hated it.

Famed wit Robert Benchley spoke for many snobs when he said of Abie’s Irish Rose, “People laugh at this every night, which explains why a democracy can never be a success.”

Given what awaited Europe in the 1930s, that turns out to be a rather unfunny comment.

Given the problems we face today, with populism and elitism and, oh yeah, democracy, too, it seems we all might want to take a deep breath.

None of which is to say that Abie’s Irish Rose or Bridget Loves Birney should be treated like great literature.

Irish Repertory Theatre artistic director Charlotte Moore tactfully told the Times that Abie is “not something we would be inclined to put on.”

But that’s okay because so many other folks just keep putting their own spin on this classic American story, from The Joy Luck Club book and movie, right up to TV shows like black-ish, and Bob Hearts Abishola.