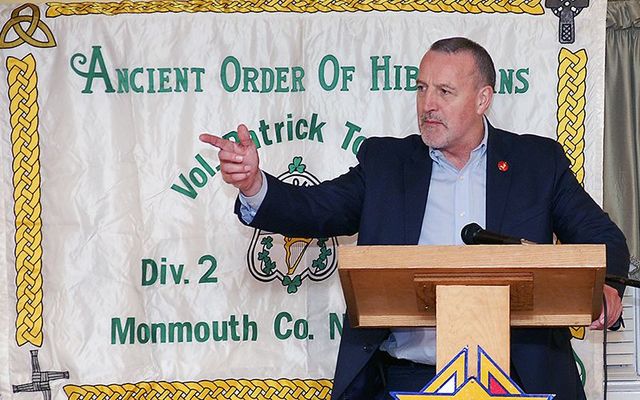 Editor’s note: Back in 1981, Malachy McAllister was sentenced to nearly four years in jail for his involvement with the paramilitary Irish National Liberation Army.  In 1988, after a loyalist attack on his Belfast home, he and his young family – his late wife, Bernadette, and their four children – fled to Canada and eventually to America.

Now over twenty years later McAllister expects to be deported from American by the Department of Homeland Security next week. Below is a statement released by the Ancient Order of Hibernians on the matter.

The Hibernians are saddened and angered that once again their Brother Malachy McAllister and members of his family are being threatened with deportation by agencies of the United States government.  Since entering the United States legally over twenty years ago, Mr. McAllister has been an exemplary member of the American community, creating two successful, job-producing businesses.

However, despite having done nothing but positively contribute to his adopted country, US immigration officials are determined to deport this grandfather of 5 American grandchildren despite bipartisan appeals by some of the most senior members of Congress and the Senate.  It is a testament to the character of Mr. McAllister that in these politically divisive times members of both parties have come together in an attempt to stay his deportation.  It is unfathomable that Immigration and Customs can choose to disregard entreaties made by the Chair of the Senate Committee on the Judiciary Lindsey Graham and the Ranking Member of the Senate Foreign Relations Committee Robert Menendez.

Mr. McAllister’s past is an open book which he has never tried to conceal.  As a young man during the darkest days of Northern Ireland’s “Troubles,” Mr. McAllister was imprisoned for engaging in paramilitary activity. He discharged his sentence, being released early for good behavior.  Shortly after his release, the McAllister home was targeted by Loyalist Paramilitaries who sprayed his home with sub-machine gun at a time when only McAllister children and his mother-in-law were present.  Fearing for his children’s lives, Mr. McAllister sought safety in the protections and justice America has traditionally offered the oppressed.   Upon entering the United States legally, Mr. McAllister applied for asylum and has subsequently complied with all requirements of U.S. law.

Despite the clear evidence of the danger the McAllister family were facing in Northern Ireland Mr. McAllister’s petition for asylum was denied.  Lawyers for the US Immigration and Naturalization Service argued that the conflict in Northern Ireland, proportionally one of the deadliest in the history of the world, did not rise to the level of civil war and therefore Mr. McAllister's acts were those of a “terrorist,” not of a soldier and not eligible for asylum. Judge Dogin agreed with the INS, while paradoxically simultaneously noting the McAllister family had endured a pattern of persecution which the Northern Ireland and British governments ''were unable or unwilling to control.''

During the intervening 18 years since the denial of Mr. McAllister’s request for amnesty, the true nature of the conflict known as “The Troubles” has been made apparent to the world; while portraying themselves as the forces of law and order, the Crown’s security forces were instead active and partisan belligerents in the conflict of Northern Ireland.  The Hibernian’s cannot help but wonder if Judge Dogin would deny Mr. McAllister’s asylum request if he had the findings of the 2012 Seville Report which found that British security forces supplied the information used by Unionist paramilitaries to target the McAllister home.

In a subsequent appeal hearing, Judge Maryanne Trump Barry (the older sister of President Donald Trump) wrote: “I refuse to believe that ‘Give me your tired, your poor, your huddled masses yearning to breathe free...’ is now an empty entreaty, but if it is, shame on us…..The problem here, though, is that Congress’s definition of ‘terrorist activity’ sweeps in not only the big guy but also the little guy who poses no risk to anyone. It sweeps in Malachy McAllister…. I would ask — no, I would implore — the Attorney General to exercise his discretion and permit this deserving family to stay.”

The President’s sister correctly saw that the decision to deport Malachy McAllister goes beyond the fate of one family; our most treasured values and history as a land of freedom and new opportunities are also on trial.  Mr. McAllister’s asylum request was derailed as an unintended consequence of 9/11 legislation, now it seems he is to be deported as collateral damage to the current debate on asylum.  Legitimate questions can and should be raised about abuse of the asylum process, but it is hard to make a credible claim of abuse when confronted with the evidence of 26 AK-47 rounds fire at a child filled home under the direction of State security forces.

The Hibernians join the president’s sister and the bipartisan entreaties of senior members of Congress in the call that Mr. McAllister deportation be stayed; justice and our American values should not sacrifice to the political expediency of the moment.

Do you think that Malachy McAllistair should be allowed to remain in the US indefinitely? Let us know your thoughts in the comments section, below.