As we all get over our Christmas indigestion it's worth bearing in mind that the Irish diet is up for "reformulation". 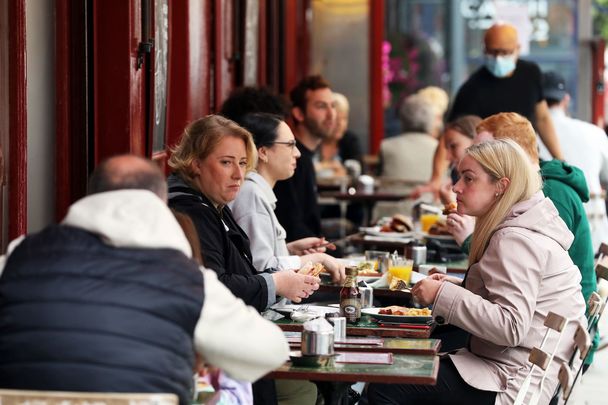 Eating out during Covid in Dublin. RollingNews

In a Christmas dinner obessed it's easy to forget those less fortunate. It's also worth considering that the Irish diet is among the unhealthiest in Europe.

One of the few rituals that has escaped the past two pandemic Yuletides is the Christmas dinner. This year was no different from any other year – turkey and ham accompanied by roast potatoes, Brussels sprouts and thick gravy.

The wine selection would have changed over the years, with palates no longer satisfied by the ubiquitous in its day Blue Nun.  We need something new world more appropriate these days.

Finishing off the main course on Christmas Day, it struck me how much the holiday season has become a foodfest.  Starting in early December but culminating in the last week, there is wall-to-wall coverage in print, on radio and TV of the foods we associate with Christmas.  Whether it is how chocolates are made, turkeys are grown or Brussels are sprouted, it is explained in great detail.

Then there are the cooking programs. On the main Irish broadcast station RTE in the week leading up to Christmas Eve I counted 12 separate shows outlining how we can cook the perfect Christmas dinner accompanied by a selection of festive dishes and treats.

It must be said, though, that it’s far from roast partridge with caramelized pear and walnut stuffing accompanied with Italian beef carpaccio I was raised. This preponderance of advice meant that there was no excuse for undercooked turkey or overdone sprouts.  At least that was the theory.

By contrast, there was just a single program in the same time frame on the religious aspect which for Christians is the main reason for celebrations.  But the battle to put that center stage has been well and truly lost to the commercial interests.  Happy holidays and all that.

There was, however, a story in the last week that merged religion and food, and that was the annual Christmas food voucher given to the homeless and poor at the Capuchin Day Centre in Dublin. At 6:30 a.m. last Tuesday there were over 30 people in line which had swelled to 800 by the time the center had opened 90 minutes later.

According to Brother Kevin Crowley, founder of Capuchin, people had been queueing from 5:30 a.m. and over 3,000 people were given a €50 voucher to help them with their food requirements. The center began operations in 1969 serving just over 60 people per day with a hot meal. It’s a sign of the times that currently up to 1,600 a day are being catered for.

While the Capuchin hand-out event was the largest, it was by no means the only one with religious and non-religious groups helping out the less fortunate up and down the country, from Belfast to Cork and all points in between.

Before tucking into the plum pudding and custard, there was an item that caused a little indigestion.  Not a news story but a report that a task force has been set up by the government to reformulate food.

Now, why would they want to do that? Well, apparently, the Irish diet is among the unhealthiest in Europe, and if we don’t do something quick we will become the obese men and women of the continent.

We have a diet that’s top-heavy with cereals, dairy, red meat and convenience foods including assorted savory and sweet dishes which in many cases equates to cheap, fast and highly processed food.

Ireland’s obesity rate is calculated as 26 percent of adults which is way above the EU average of 16 percent.  What really caught my eye, though, were frightening predictions by some experts that the current generation of young people will be the first to live shorter lives than their parents because of obesity and its complications including cardiovascular problems and Type 2 diabetes.

These high rates of obesity show that most interventions previously attempted by public health policy have proved to be ineffective.  It is, I’m afraid, a fact that most consumers are not making good decisions for either their own well-being or the well-being of society. Health warnings about obesity and recommendations in relation to dietary choices are being ignored.

So, a multi-pronged approach by the government is being adopted where along with education and monetary encouragement to do the right thing – think of sugar taxes – there is also a concerted effort to work with the food industry to make products healthier.

That’s what reformulation is about, the link between food and health.  The objective is to have a positive impact on our diet by reducing salt, sugar, saturated fats and calories in food products.

While Christmas is not a good time to observe changes in behavior there are some indications that our outlook, if not our habits, are changing. People are dining at home more and are spending more on organic ingredients.

According to Bord Bia, the Irish Food Board, research showed that lockdown provided a safe space to experiment with new and different flavors in their cooking as food preparation, or scratch-cooking, becomes a hobby. This surely will lead to healthier eating.

However, there is no room for complacency, especially as the Irish diet is also known as the SAD diet, the standard American diet. Food for thought then for all of us as we consider New Year resolutions and a week of reheated turkey and ham.