Ireland’s government is failing the disabled

"If we want a disability service that delivers for those that need us then it requires action at a political level." 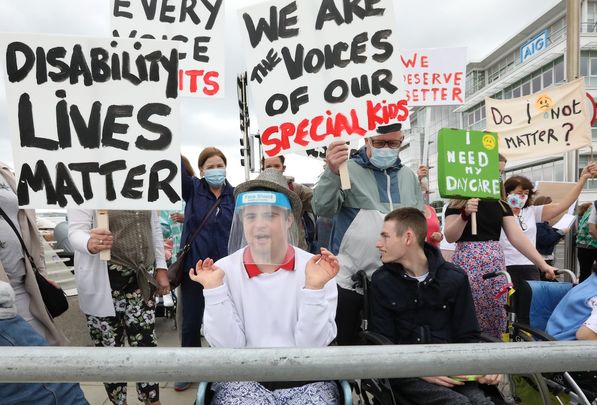 A protest in Dublin in 2019 after day services for the disabled were removed during Covid. RollingNews

Ireland is no country for the marginalized, but then that’s not news and hasn’t been for some considerable time, and the most marginalized are those with a disability.

But care and attention for the disabled is becoming a major issue in Ireland with the treatment of the disabled being compared to what happened to young children in orphanages a generation ago.

As we go to press yet another scandal has broken out, this time in a residential center in Donegal with serious allegations of sexual abuse. According to reports at least 18 intellectually disabled residents of a Health Service Executive-run center in Donegal were subjected “to sustained sexual abuse” during a 13-year period with the full knowledge of staff and management.

The questions arise as to why management did not deal with this, and where were the parents and advocates?

While I don’t know the answers to that question, I am aware of a situation where parents of an adult in another residential setting approached management with their concerns.

The response, in a letter, was that if they made any further complaints, “they could pick up their son at the gates.” It is that kind of attitude that is feeding the coming crisis. 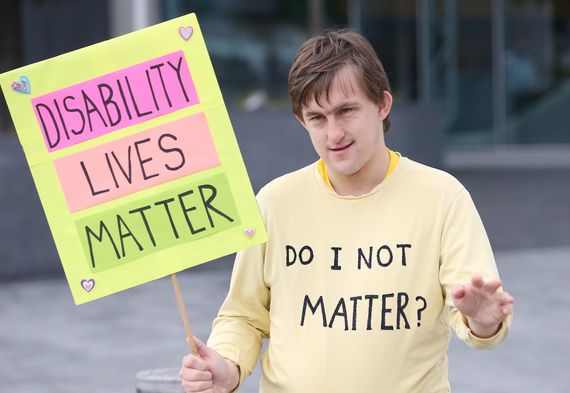 A protest in Dublin in 2019 after day services for the disabled were removed during Covid.

The knock-on effects of such low employment levels become even starker when we look at the standard of living for disabled people given that the most protective factor against poverty and social exclusion is being at work. They are more than twice as likely to experience poverty and deprivation as those without disabilities.

While this report focuses on employment, the same can be said of education, training and housing. It’s a vicious cycle of poor education, unemployment, poverty and exclusion.

The report was commissioned by the National Disability Authority (NDA), yet another one from a body that has an unenviable track record when it comes to publishing lengthy tomes but a dismal history of doing something.

In fact, this is the story of Ireland itself -- reports, analysis and recommendations that would make it the envy of most states, but sadly no end product, no accountability, no impact, no good follow through.

And yet we spend €2.3 billion a year on disability services. Where does this money go?

No doubt a lot of it is well spent on badly needed services and managed by committed personnel dedicated to making life better for those with a disability. But that cannot be said for all.

The fact is that disability has become an industry, feeding a creaking bureaucracy in our health service and creating a myriad of agencies each with their well-paid jobs. Disability in Ireland, for some, is a cash cow, but not for those who need it most.

Let’s look at some examples of incompetence and poor governance. The government made a decision to implement a policy known as Progressing Disability Services for Children and Young People, with an objective of providing a fairer way to provide services to children up to age six. It is well known that the greatest progress with mental disabilities like Down syndrome and autism can be made by early intervention.

Now who could be against that and what could possibly go wrong?  Well, practically everything actually. 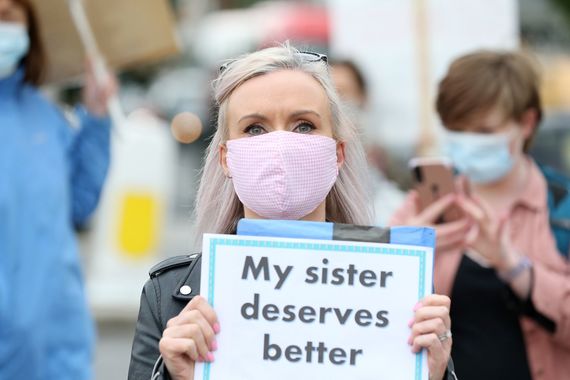 A protest in Dublin in 2019 after day services for the disabled were removed during Covid.

The success of it was dependent on proper planning of the change and resources being made available to the new disability teams set up around the country.  Neither happened, and chaos, confusion and consternation now abound in the children’s disability area.

Therapists were withdrawn from special schools, waiting lists for assessments have lengthened, certain specialisms such as dieticians, occupational therapists and psychologists are no longer available in geographic locations.

To cap it all off, the process of transferring medical records to these teams have run into legal problems. So, for instance, in one region kids with an intellectual disability have been left without any service for over 18 months because of the lack of relevant files.  As a dedicated member of one of these teams told me, “It’s a s***show.”

Sadly, it’s not the only one in town. Another policy of the Health Service Executive was devised to make the daycare of adults with an intellectual disability more relevant to their users was introduced a number of years ago.  Titled “New Directions,” it arrived on the scene like a shiny new suit in a blaze of fanfare.

Once again, the reality is different.  According to documentation that I have seen, sent out by an organization that receives over €9 million annually from the government, the activities that they organize cannot include formal education, vocational training or employment.

So we have a situation where on the one hand the government want people with a disability to get jobs, but on the other hand, they are not to be trained or educated or assisted in getting employment by the very organizations that cater for them on a daily basis.

The level and quality of some of these day services have been criticized.  A manager of a progressive day service provider has described them as “do nothing centers.”  One parent compared them to “corrals” where individuals are rounded up and watched for the day, while another, upon being told that her son had gone for a walk around town every day as part of his service said ruefully, “He’s not a dog you know.  He needs more than that.”

This is not a criticism of the many client-focused staff who do an excellent job and are just as frustrated as the clients and their advocates. It’s a systemic failure of a system that’s not fit for purpose, but one that is guarded jealously by vested interests.

So, what is the answer? No more reports from the NDA for a start. If we want a disability service that delivers for those that need us then it requires action at a political level, but not in the way of speeches and promises.

Full implementation of legislation already on the books is needed along with the protocol in the UN charter of rights that would allow individuals to bring complaints against the government. That and a disability czar who would cut through the well-paid vested interests and ensure that resources and relevant programs reach those who need it most, the people with a disability.

Alas, the greatest disability appears to be the inability of the various responsible bodies to act in the best interest of the disabled.